With $111 million in capital raised in 2022, reality capture startup OpenSpace is taking its 360° imaging technology to a global construction market. A recent $9-million investment from tech firm Taronga Group and real estate tech investor GreenPoint Group is expected to help OpenSpace enter markets beyond its current North America footprint, according the company’s CEO.

“We’ve really become a global company in the past year or so,” says Jeevan Kalanithi, OpenSpace co-founder and CEO. “This [investment] will help us serve customers in specific regions.”

Avi Naidu, managing partner of Taronga Ventures, said in a press statement that his firm sees “continued growth potential in OpenSpace, especially in regions like [Asia-Pacific] and the Middle East, due to its ease of use, making it simple for customers to adopt and implement quickly. OpenSpace is fast becoming an industry standard, and we’re pleased that we can continue to support this growth.”

OpenSpace uses 360° images captured from hardhat-mounted cameras to stitch together full 3D images of construction sites matched to floor plans. According to OpenSpace, these 360° images can be processed in an average turnaround time of 15 minutes, improving decision-making based on current conditions.

Since the company’s founding in 2017, the demand for reality capture has changed, says Kalanithi. “Many of our customers are using this as part of their standard operations … it’s part of how they run their businesses,” he says. “This kind of reality capture is becoming standard in the industry.”

Beyond the basic stitching of 360° images, OpenSpace has added a few new features over the past year. Newer iPhone Pros and iPads offer basic LiDAR functionality, allowing users to quickly generate 3D point-cloud models of objects and surfaces in their immediate surroundings. This 3D mapping data can now be brought into OpenSpace as well.

Kalanithi is quick to point out that while OpenSpace captures and processes all kinds of site data, the company is not seeking to become a full project management platform. OpenSpace already has integrations with Procore, PlanGrid and Autodesk, and the company’s product development is still focused on improving ease-of-use and meeting immediate needs of customers, he says. 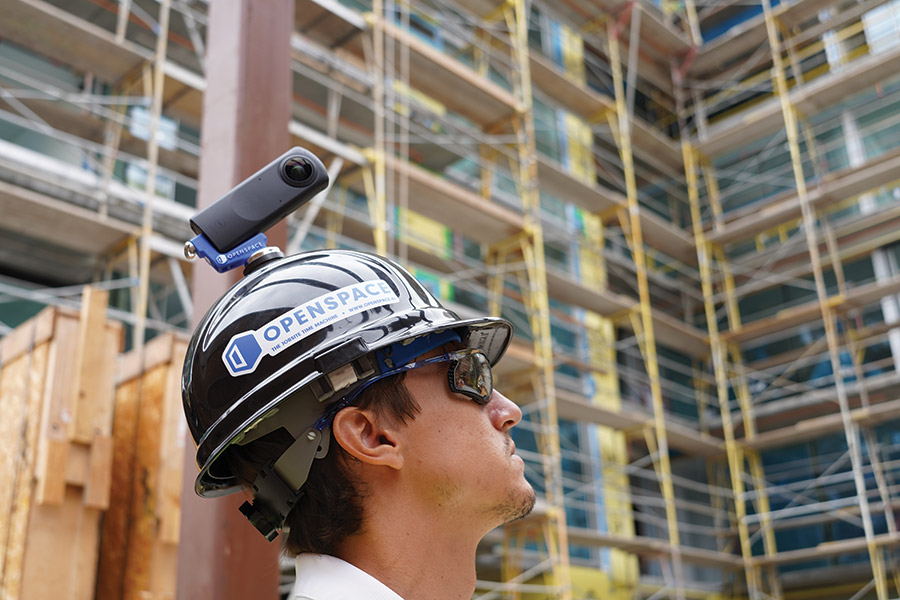 Images are captured by off-the-shelf 360° cameras, offering a low barrier to entry.
Photo courtesy of OpenSpace

However, the company has been investing in machine learning and artificial intelligence-derived computer vision for automated classification of objects and structures in its reality capture data.

The computer vision approach has allowed the company to expand last year into automated work-progress documentation, through its ClearSight Progress Tracking feature. “This AI-powered product allows us not only to organize images by where they go on site, but understand what is in imagery, and classify and categorize it,” says Kalanithi. “We’re able to tell drywall subcontractors how much they’ve hung so far. We’re doing it for a lot of trades.” He adds that some insurers are also looking at data from OpenSpace to help to resolve claims.

And as digital twin workflows continue to gain ground in the industry, Kalanithi says the determining factor for adoption will be how actionable the information really is. “I do think this industry will rely more and more on the real actual data of what’s going on with spaces they own and operate, as opposed to secondhand reports on it,” he observes. “The more you know what’s on the project, the more you can reduce risk and uncertainty.”