Two summers ago, 35-year-old Timothy Barber started a new job with a contractor on a bridge project, sorting bolts in upstate Geneseo, N.Y. The temperature outdoors was in the 90s and at the end of his day Barber's father did not think he looked well. The next day he collapsed on the jobsite at the end of his shift, dying before reaching the hospital.

The cause was hyperthermia, or high body temperature.

Barber's parents have been campaigning ever since for stronger worker heat safety rules, but his former employer is contesting related U.S. Occupational Safety and Health Administration fines, according to U.S. Labor Dept. records. The owner of Pavilion Drainage Supply Co. has told local media that Barber's death is a terrible tragedy but that he had access to shade and water at the bridge project.

Two years later, the first crushing summer heat wave of 2022 is beating down on construction workers across the U.S. Yet the high temperatures have not dispelled employer concerns about what the Biden administration's new planned heat-safety standard could contain. They fear OSHA will adopt an overly detailed set of rules that will entangle employers without adding significantly to heat safety. 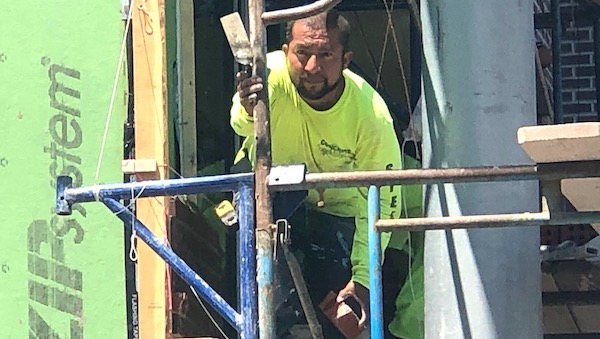 A mason looks up from his work during a scorching afternoon constructing an apartment building in a New York City suburb.
Photo by Richard Korman for ENR

Since the Biden administration invited comments last year on what a new OSHA heat safety standard should look like, ideas have poured in from many corners of the working world, including construction.

The Labor Dept. first published its advanced notice of proposed rulemaking for heat injury and illness prevention in outdoor and indoor work settings on Oct. 27, 2021 and has sought public comment on the proposal.

In a comment submitted by Fred Geller Electrical, the writer stated that humidity is one of the major heat stress issues in the northeast U.S. and New York City. Mixed with poor air quality, it can cause serious respiratory complications, the unidentified respondent noted.

Industry associations are worried that complicating factors—including how to measure levels of heat stress and whether the standard should distinguish between work performed outdoors versus indoors—could result in an overly complex standard. One industry group, the Employers Heat Illness Prevention Association has called for OSHA to limit any initial standard to outdoor work.

A coalition of construction-related employer associations, the Construction Industry Safety Council, also wants OSHA to keep things simple. It wrote in January of "significant concerns" about possible "complicated requirements" triggered by "threshold temperatures that are common in wide swaths of the country for much of the year."

The council's comments to OSHA said its members "feel strongly that a regulatory approach—if adopted—must be simple and should integrate the key concepts of “Water, Rest and Shade.”

A great deal of supporting data was provided. Slightly under half of the average of 38 heat-related deaths per year from 2011 to 2019 fell under the grouping of construction, repair or cleaning. In the same span of time, OSHA says there was an average of 2,700 lost-time cases per year, but the agency also believes there was under-reporting.

Research has shown that Latino immigrants in the U.S. are over-represented when it comes to heat-related work hazards. Undocumented immigrants are especially vulnerable. Various construction associations and companies have for years provided guidance on heat. But partly out of concern about the extreme swings in weather blamed on climate change, new heat-related standards are in the works, too.

Four states—California, Minnesota, Oregon and Washington—already have heat standards in place for employers. They address hydration, shade, breaks, training and medical response plans. And Maryland and Nevada now require officials in their respective states to create their own workplace heat rules.

California's all-industry standard, however, "is cumbersome, confusing and ineffective," the construction council wrote. Any standard on heat, it argued, should address individual industries based on their distinct characteristics.

The National Safety Council, in its response to the request for comments, noted that some of its members have acclimatization plans for new employees and for existing employees when seasons and weather changes. Acclimatization is partly based on the idea that an 80°F heat wave in Alaska could impact workers there more than a 99°F day in Arizona.

Other suggestions may be more than construction employer groups are willing to endorse. Melvin B. Dolobah, a Houston-based safety consultant, recommended heat safety plans that included having a heat safety representative or EMT on premises and stop-work authority for staff who consider a company's heat policies to be violated.

The American Road & Transportation Builders Association argued that there was already proactive industry guidance covering heat and as far as it is concerned, the current impact of heat exposure on transportation construction workers is "minimal."

'While any fatalities on the jobsite are most unfortunate and tragic,' and the BLS number 'could be slightly understated due to reporting omissions, the number of occurrences is still relatively low.'
David Bauer, CEO, American Road & Transportation Builders Association

"While any fatalities on the jobsite are most unfortunate and tragic, and the [Bureau of Labor Statistics] number could be slightly understated due to reporting omissions, the number of occurrences is still relatively low," he said.

Meanwhile, the heat waves keep rolling in every summer and scientists say climate change means there is worse still to come.

Barber's employer told local television station WHAM that in addition to having access to shade and water, the employee had received around 14 hours of training in two different courses.

OSHA disagreed. Its investigation into Barber's death found he had been working alone without shade or water and was not acclimated to the heat. OSHA proposed a penalty of $7,557.

On the one-year anniversary of Barber's death on July 7, 2020, OSHA officials used the occasion to call on employers to protect workers from heat hazards. Speaking in Buffalo, N.Y., OSHA Area Director Michael Scime said in a statement that the hazards employers are responsible for include "extreme heat."

James and Kathy Barber, Timothy's parents, joined in the occasion, saying that "no family should have to suffer a loss that is completely preventable."

The initial comment period for a new heat standard is now closed and there is no set schedule for when a draft standard will be unveiled.