Brown and Caldwell announced in June that it had been hired to work with the Portland Water District in Maine to develop a master plan evaluating current and future biosolids management.

Costs associated with biosolids disposal have risen 44% in the past two years, due to rising landfill disposal fees, as well as evolving regulations relating to emerging contaminants such as per- and polyfluoroalkyl substances (PFAS), according to PWD.

“Where we are right now is not sustainable. We will look at creative ways to reduce the volume of biosolids generated and explore available treatment options,” says Scott Firmin, PWD’s director of wastewater services.

Brown and Caldwell’s scope of work on the project includes identifying risks, performing a regulatory review and cost estimates, and providing other engineering analyses to develop a master plan assessing solids processing and disposal alternatives at the district’s four wastewater treatment plants.

Burns & McDonnell is nearing completion of a drinking water supply project for the Village of Homewood, Ill. The $12-million progressive design-build project, which includes an 11 million-gallon-per-day booster pump station and approximately 2.5 miles of 30-in.-dia transmission pipes, is expected to complete in August and is being financed entirely by the village’s rate plans. Homewood embarked on the project to be able to access a new, less costly drinking water supply.

Stantec has been selected as program management consultant for the Iona Island Wastewater Treatment Plant projects in Vancouver, British Columbia. The estimated $7.6-billion multiyear program includes construction of a new tertiary treatment facility and a range of ecological restoration and off-site works projects. The project is the largest ever undertaken by Metro Vancouver, a federation of 23 municipalities, one electoral area and one treaty First Nation that collaboratively plans for and delivers regional-scale services. Stantec says the project design will increase the level of treatment to improve both water quality and the surrounding marine environment, and improve resilience to withstand earthquakes and potential sea level rise. 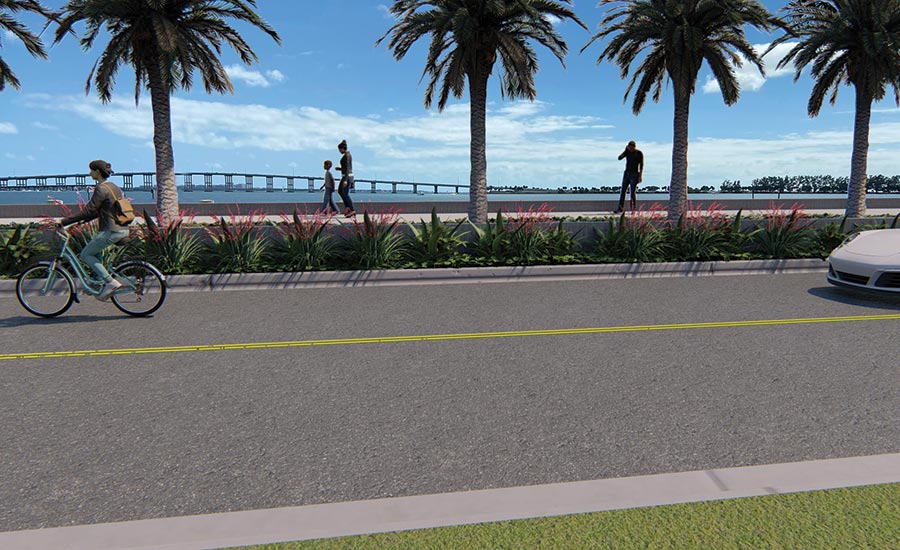 Tetra Tech is working with the City of Miami to evaluate concepts for improving the city’s resiliency against sea level rise, storm surges and flooding. The project's components include roadway and drainage improvements, enhancing greenspaces along the waterfront and improving the existing seawall's resiliency. According to the city website, the existing 4-ft, 2-in.-high seawall provides little protection from intense storms and king tide events, which cause Brickell Bay Drive and the Baywalk, only 5 ft from water, to flood routinely. Although still in the developmental stages, the plan for the Brickell Bay Drive waterfront area could include raising or revamping the city’s seawall, as well as adding nature-based solutions.