SmithGroup is planning and designing the new $3.75-billion UC Davis Health California Tower in Sacramento. The project is being delivered through a progressive design-build contract with contractor McCarthy Building Cos.

When completed in 2030, the facility will include a 14-story hospital and a five-story pavilion adjacent to the existing hospital. Creating a combined 1 million sq ft of new space, the tower project will roughly double the square footage of the existing medical complex. The design calls for single patient rooms in the tower, rather than two-bed rooms, providing approximately 400 new private patient rooms.

The patient rooms will be “acuity adaptable,” according to UC Davis Health, enabling them to potentially be used as temporary ICU rooms with air isolation, if needed. UC Davis Health says the design gives the future facility the flexibility to handle a surge in critical care cases, such as during a pandemic, massive wildfire or radiation leak. Other features include operating rooms, an imaging center, facilities for an existing pharmacy and burn care units.

Demolition and site preparation are underway, with detailed design phases continuing through 2023.

HDR and Herzog & de Meuron are designing a new hospital at the University of California San Francisco Helen Diller Medical Center at Parnassus Heights. The University of California Board of Regents recently approved plans to build the $4.3-billion facility, which is scheduled to open in 2030. The 15-story hospital will expand capacity for additional acute, emergency and intensive care beds. Overall bed capacity will increase to 682 beds, from 475 beds in 2020, when the facility is complete. The new hospital aims to increase capacity during public health crises, rather than reducing or cancelling non-essential surgeries to make room for patients with urgent needs.

The U.S. General Services Administration recently approved Skidmore, Owings & Merrill’s design concept for a federal courthouse in Fort Lauderdale, Fla. The ten-story, 252,000-sq-ft building will be sited on the southern bank of the Tarpon River, offering green spaces, including a riverfront trail. The building is targeting both LEED Gold and SITES Silver certification. The courthouse is projected to achieve a 30% reduction in energy use over baseline levels. A design-build contract is scheduled to be awarded this fall, with a construction start anticipated in 2023 and completion in 2026. When completed, the building will include twelve courtrooms, seventeen judges’ chambers, and workspace for other federal agencies. 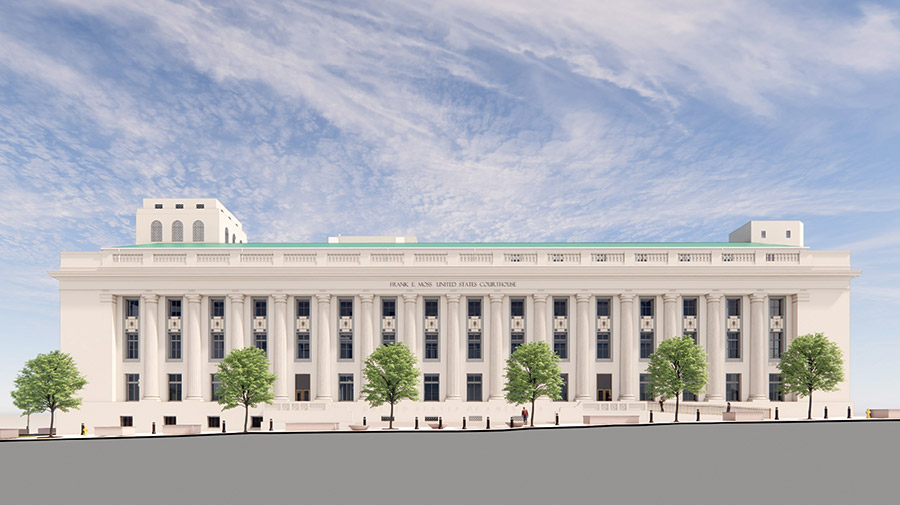 Ground was recently broken on the $116-million renovation of the Frank E. Moss U.S. Courthouse in Salt Lake City, which was designed by HOK. GSA awarded the renovation contract to locally operated Big-D Construction. Renovations are scheduled to complete in 2024. The scope includes a seismic retrofit, backfill and the renovation of the existing courthouse, which was originally built in 1905 in Salt Lake City’s Exchange Place Historic District. HOK’s design services aim to preserve and restore building history while transforming it into a modern office space.