This website requires certain cookies to work and uses other cookies to help you have the best experience. By visiting this website, certain cookies have already been set, which you may delete and block. By closing this message or continuing to use our site, you agree to the use of cookies. Visit our updated privacy and cookie policy to learn more.
Home » California High-Speed Rail Connection to Silicon Valley Approved
CaliforniaCalifornia Construction NewsCalifornia Construction Projects
High-Speed Rail

A critical 90-mile section of California’s high-speed rail extending the system from the Central Valley into the San Francisco Bay Area has been unanimously approved by the High-Speed Rail (HSR) Authority Board of Directors.

The Final Environmental Impact Report/Environmental Impact Statement (EIR/EIS) for the San Jose to Merced project section in Northern California was approved by the board on April 28. The action completes the environmental clearance for nearly 400 miles of its entire 500-mile Phase 1 alignment from San Francisco to Los Angeles/Anaheim.

“We know what the alignment will be and where we will be building, and generally the approach we are going to take with that alignment,” he says.

The next step is the design-build and preconstruction phase, which can begin as soon as funding is secured, says Lopez. In the meantime, he says the main focus of work is in the Central Valley, where there are 35 active job sites spanning 119 miles.

“The 119 miles will serve as a test and certification track (for the HSR project), as there is currently no place planned or under construction anywhere in the country where we could achieve our voter mandated speeds of 200-plus miles per hour,” says Lopez.

The planned San Jose to Merced project section will connect the existing construction in the Central Valley to San Jose’s Diridon Station, the city’s central passenger rail depot and a major intermodal transit center for Santa Clara County and Silicon Valley. Officials say the high-speed rail system will make the trip from Fresno to San Jose in one hour, compared to three hours by car today. 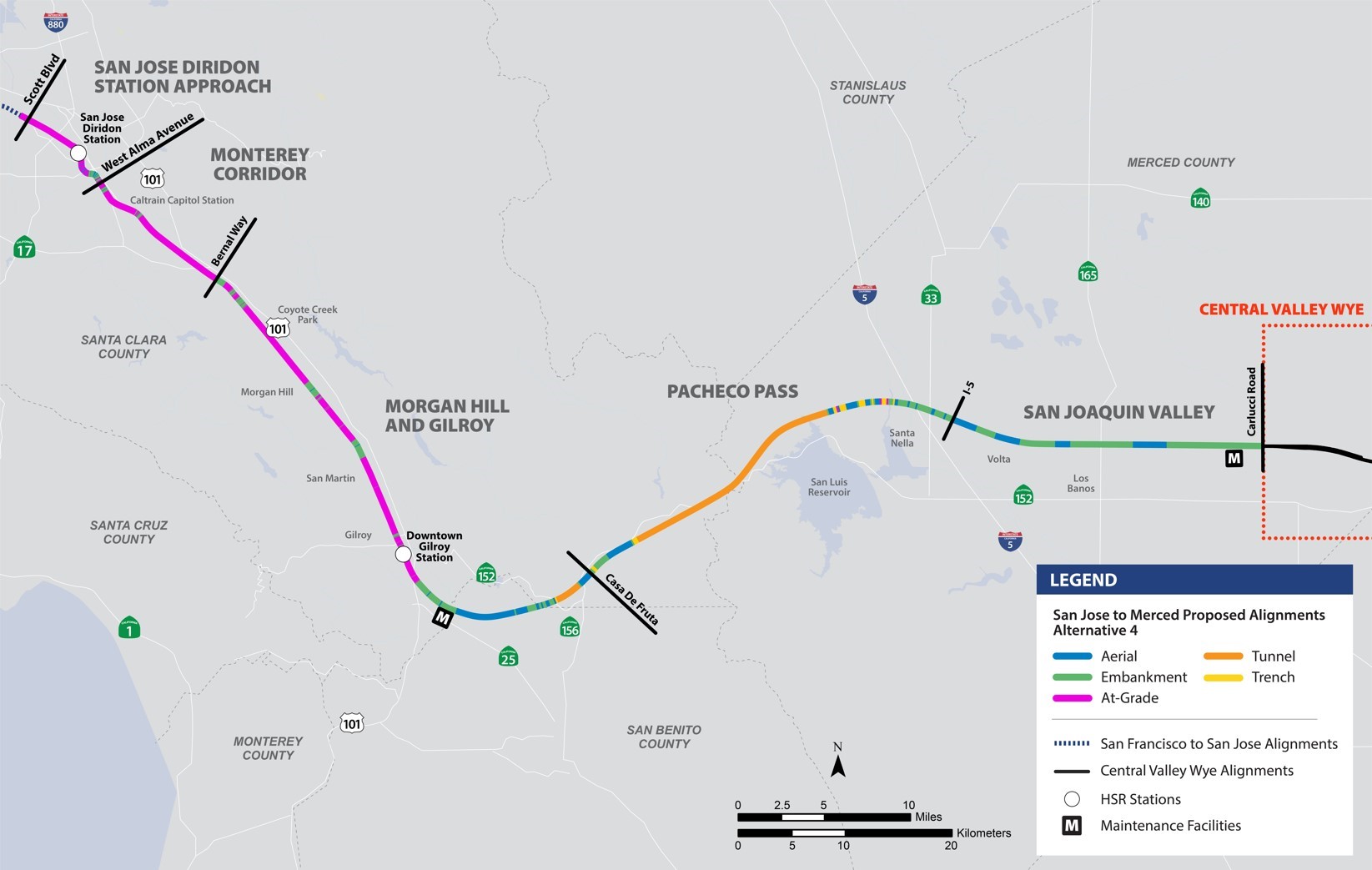 The certification of the final EIR/EIS and approval of the San Jose to Merced section moves the project closer to being “shovel ready” when pre-construction and construction funding becomes available. For this portion, Alternative 4 was selected as the approved alignment among four alternatives studied. This plan modernizes and electrifies the existing rail corridor between San Jose and Gilroy, allowing for both high-speed rail and Caltrain service.

East of Gilroy, the alignment includes more than 15 miles of tunnels through the Pacheco Pass in the rugged Diablo Range. The project faces significant challenges in this area due to poor-quality rock formations, faults and shear zones, and potentially high groundwater inflows that can affect tunnel stability. Additionally there are risks for biological and natural resources.

“To design the safest possible tunnels, the Authority is using the best available practices from around the world,” says HSR Northern California regional director Boris Lipkin. “Preliminary engineering analyses have identified tunnel boring machines (TBM) as the most likely means of construction for the tunnels.”

Besides approving the San Jose to Merced portion, the Rail Board on April 28 also:

Opinion: With Merced-to-Bakersfield Route, a High-Speed Rail Reset in California

$5B Added to California High-Speed Rail Budget in Draft Plan