This website requires certain cookies to work and uses other cookies to help you have the best experience. By visiting this website, certain cookies have already been set, which you may delete and block. By closing this message or continuing to use our site, you agree to the use of cookies. Visit our updated privacy and cookie policy to learn more.
Home » P3 Team Creates New Path for VA Projects
Midwest Construction ProjectsBuildingsAwards
Best of the Best

Project of the Year

The U.S. Dept. of Veterans Affairs Omaha Ambulatory Care Center became the first agency project to put private money toward construction while also using funds from available VA appropriations. The public-private partnership that ensued to deliver the project was also a first for the agency.

In 2016, Congress appropriated $56 million for a new hospital in Omaha. But, due to cost overruns at other VA projects, that sum wasn’t nearly enough to deliver the hospital that had been designed to replace Omaha’s 1940s-era VA Medical Center.

Rather than shelve the project, a bipartisan group of Nebraska politicians, including then-U.S. Representative Brad Ashford (D), U.S. Rep Don Bacon (R) and Senator Deb Fischer (R), proposed a new law—Communities Helping Invest Through Property and Improvements Needed (CHIP IN) for Veterans Act of 2016—that allowed then-VA Secretary David Shulkin to authorize community groups to contribute to the cost of VA facilities. Previously, military-related agencies could only accept donations in the form of projects that were paid for and built entirely by private groups, such as the Center for the Intrepid at Brooke Army Medical Center, and then gifted to the federal government. 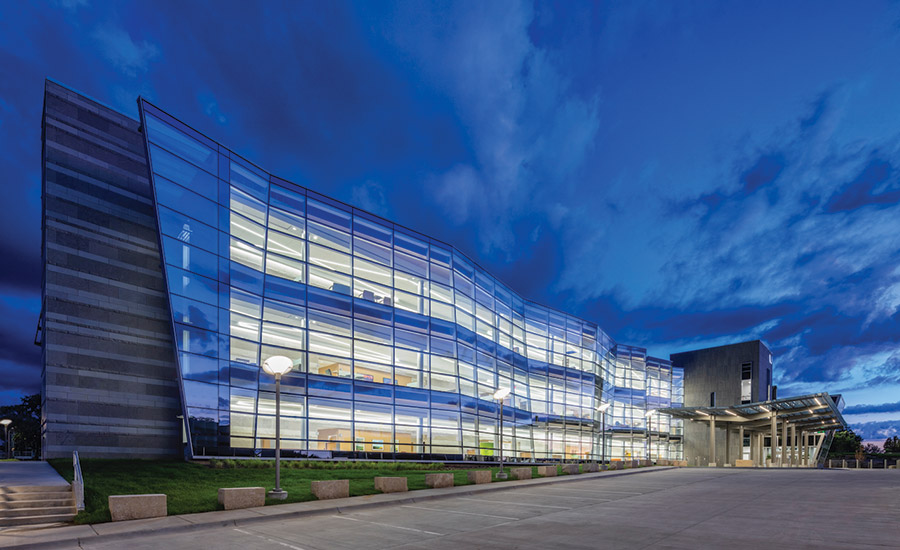 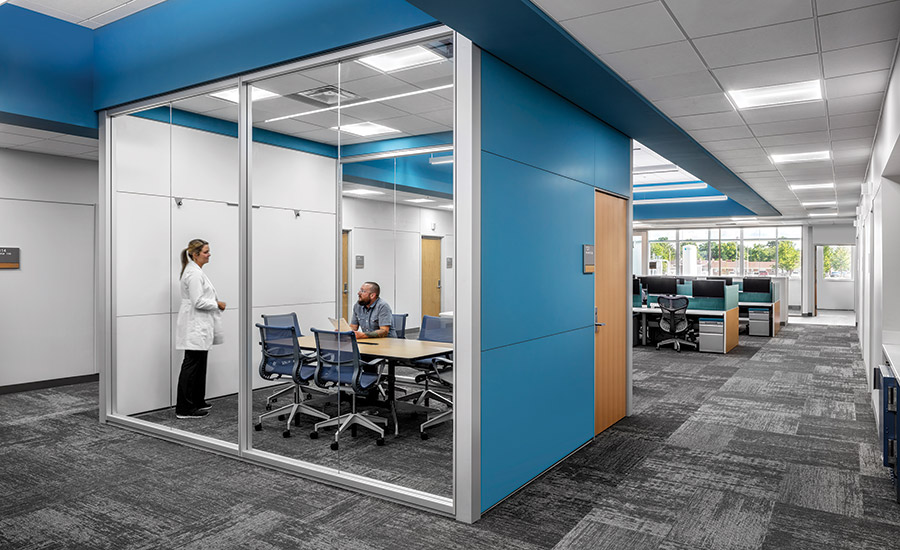 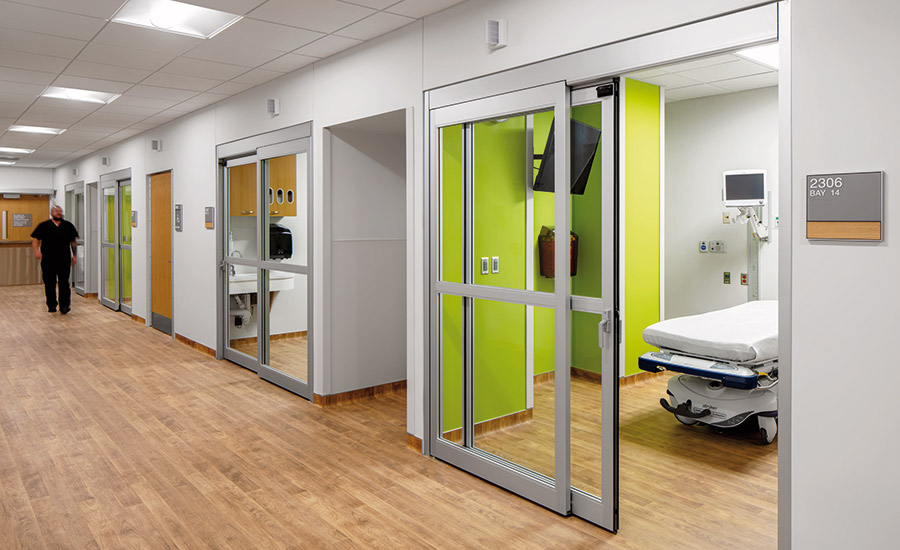 The features of the Omaha VA Ambulatory Care Center were designed to heal mind and body. Spaces for one-on-one counseling and outpatient medical care help vets. A whole-building natural lighting strategy that includes a colorful ribbon wall is meant to reflect the ribbons veterans have won for valor.
Photos courtesy of Leo A. Daly Inc. and McCarthy Building Cos Inc.
*Click on the images for greater detail

The late Walter Scott Jr., former CEO of Kiewit, and the philanthropic group he co-founded, Heritage Services, quickly joined forces with Tetrad Property Group and created the Veterans Ambulatory Center Development Corp., which raised $30 million for the project. Designer Leo A Daly and construction manager McCarthy Building Cos. came on board the P3 soon after. The now $86-million budget made viable an alternative option: an Ambulatory Care Center, which would also free up space in an existing hospital next door. P3 delivery also fit into Shulkin’s mission to modernize the VA.

Two McCarthy team members— senior VP and Omaha business leader Ryan Sawall and project manager Kris Montgomery—had worked on a previous VA project in New Orleans using traditional delivery methods, Sawall says. “So, when we started this, we said, ‘We can do this better. We can do this more efficiently.’ We started with that mantra.”

Leo A Daly’s design called for a 157,000-sq-ft, three-story facility with seven primary care clinics on the first two floors, rectifying the haphazard placement of clinics over several floors in the old medical center. The first floor houses the VA’s first women’s clinic, plus a specialty care clinic shared by orthopedics, cardiology and other specialties. Radiology and a new outpatient surgery center occupy the second floor. A connector on the first floor provides direct access to the existing hospital, which still serves the inpatient and medical services of Omaha’s vets.

“What we were able to do is infuse the private sector’s ability—the speed-to-market of private construction—that allows you to get through the questioning and the back-and-forth and getting the blessing from the VA, at every phase throughout the design,” says Jonathan Fliege, director of design in Leo A Daly’s Omaha office. “That was all streamlined and honestly, that’s been the beauty of the P3 helping get this project done in a timely manner and at a budget that’s in line with a private-sector one.”

According to Montgomery and Sawall, McCarthy used subsurface utility mapping, employed the project’s building information model to inform construction and used a design-assist subcontracting method instead of hard bids as several strategies that helped the team accelerate the schedule. 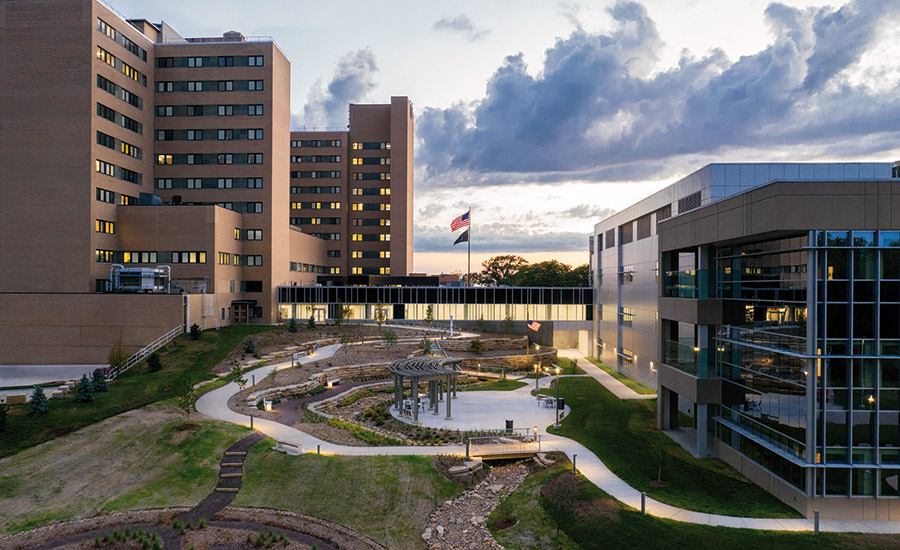 The center links to an existing 12-story hospital for inpatient care. New landscaping between the buildings doubles as outdoor meeting, terrain exercise and counseling space.
Photo courtesy of Leo A. Daly Inc. and McCarthy Building Cos Inc.
*Click on the image for greater detail

The project’s design objectives were ambitious. Two large curtainwall features enable a whole-building natural lighting strategy that provides a healthy space for both veterans and the workers that serve their needs. The “flag wall,” a glass curtainwall on the outpatient center’s northern facade, rises 50 ft and spans 235 ft across and resembles an American flag rippling in the wind. The curtainwall system features 12-in.-deep mullions with 1/8-in.-thick extrusions to meet federal blast load requirements and match with the underlying steel superstructure.

The second daylighting element features a colored “ribbon wall” along the western facade that resembles the ribbons soldiers, sailors, airmen and marines receive for valor in combat. 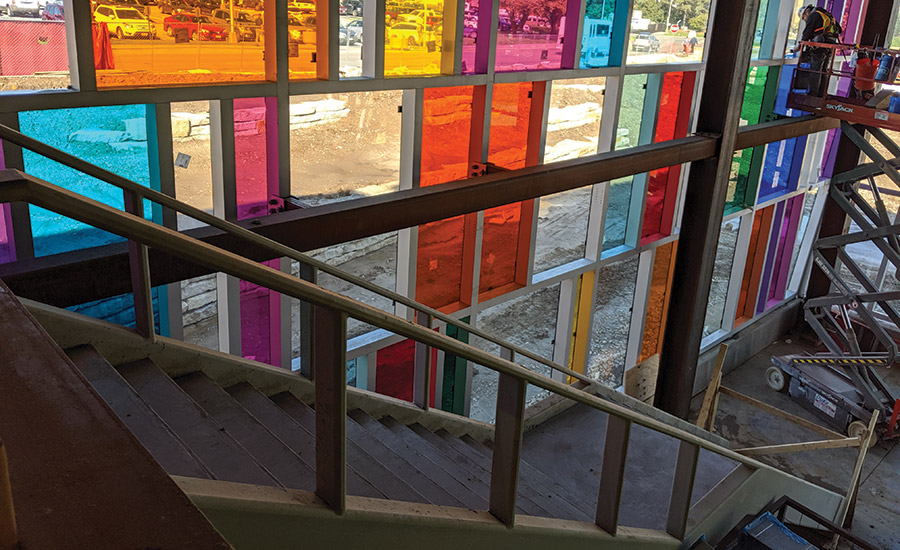 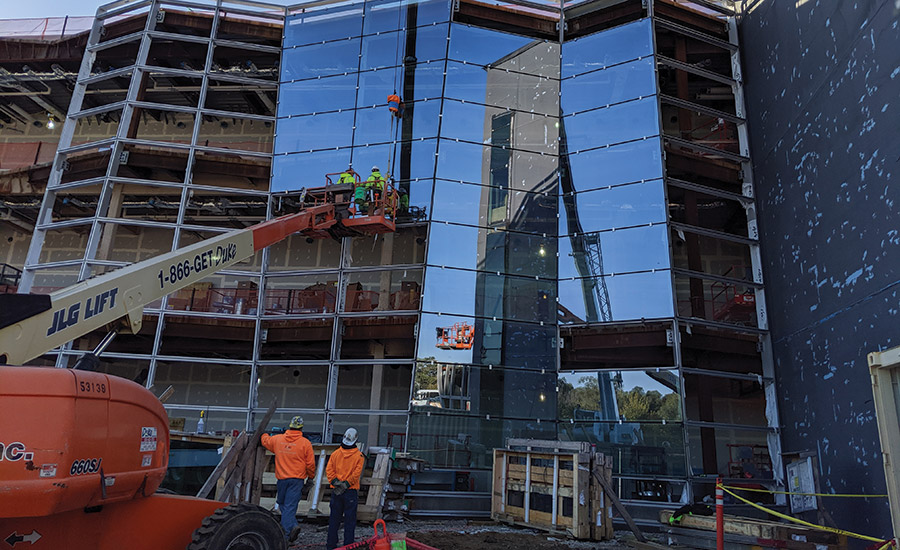 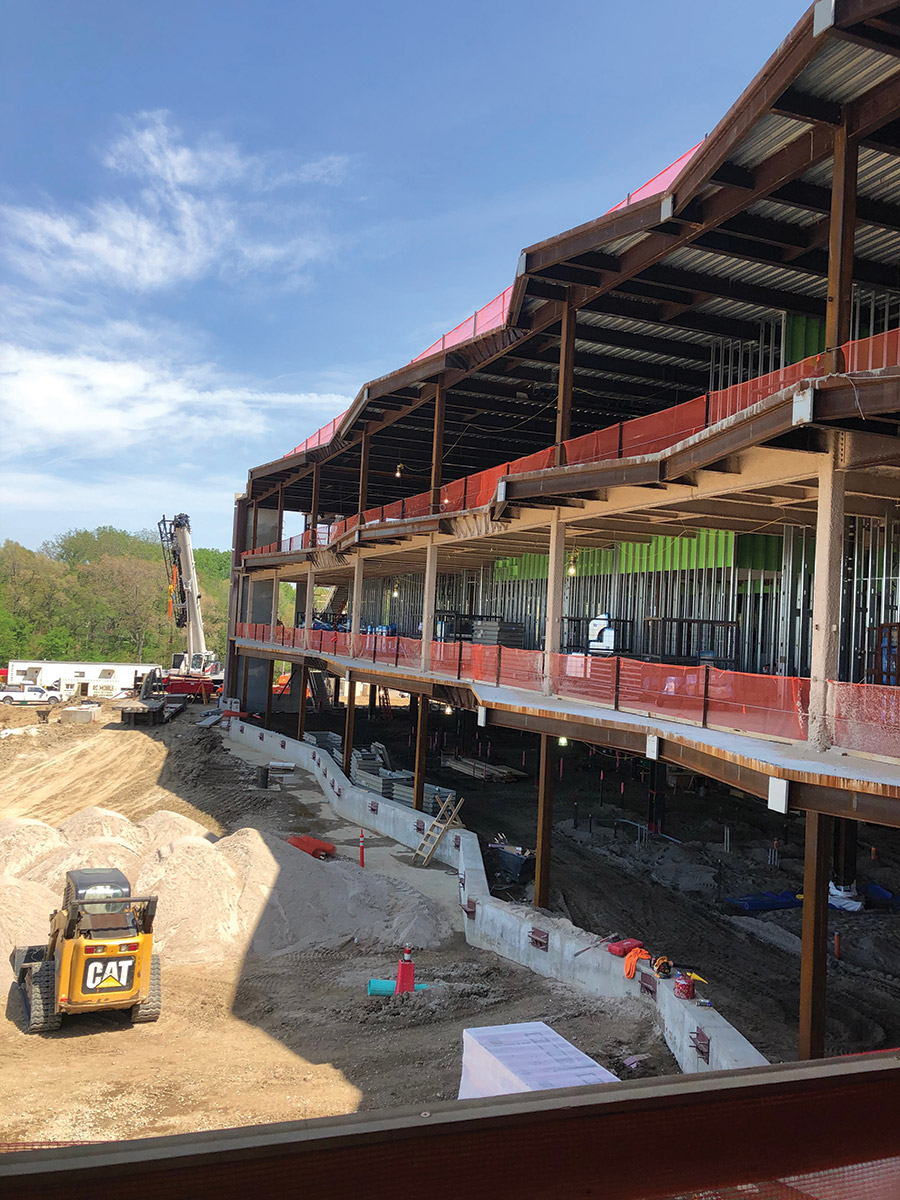 Fliege said that rather than opt for costly tinted glass, one of the regulations for VA projects actually helped the design team deliver the ribbon wall cost effectively.

“Glazing on a federal building needs to be laminated due to security parameters that originally came from the Oklahoma City bombing,” he says.

Since all of the glass would need to be a sandwich of two panes of glass and a laminate layer between, Fliege thought, “these laminates, this inner layer—they also make those in colors. Instead of having colored glass with a clear laminate, what if we just actually used clear glass but we had a colored laminate?” 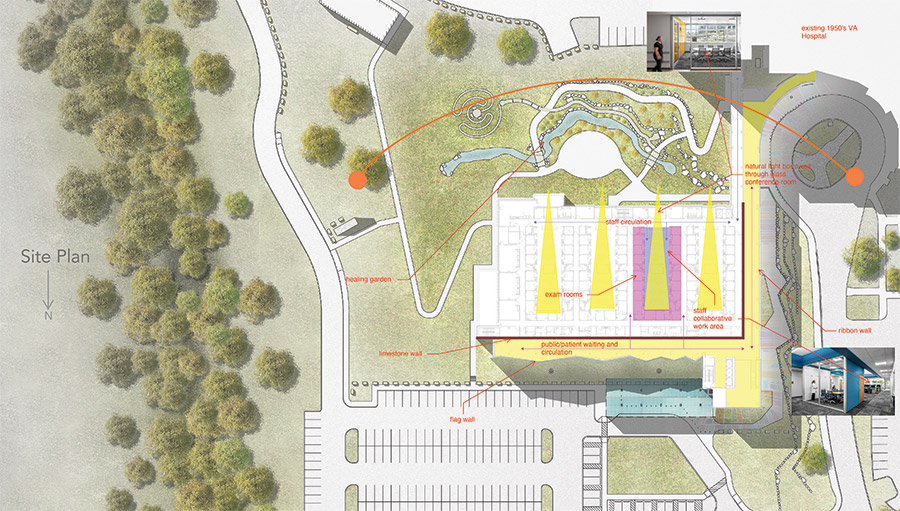 Leo A Daly’s design of the Omaha VA Ambulatory Care Center allows natural light to filter into all outpatient treatment and counseling/meeting spaces through the project’s flag wall and ribbon wall. The landscaping doubles as counseling and exercise space.
Photos courtesy McCarthy Building Cos. and Leo A Daly Inc.
*Click on the images for greater detail

The cost for colored laminates was only a pennies-on-the dollar increase over regular laminates and was much less expensive than tinted glass.

A limestone wall runs continuously along the first floor and opposite the main staircase of the facility and represents veterans’ duty and sacrifice.

“The limestone was really an idea meant to represent the experience of coming from Iowa and Nebraska and going to these conflicts,” Fliege says. “People bring back this experience with them. It’s still an agrarian place out here so tying it back to an earth metaphor was also important. Limestone is put down in layers over time so it shows that passage of time.”

Even with the planning and P3 execution, some factors were outside of the team’s control. The project endured materials shortages during 2020. Even though construction continued throughout the pandemic in Nebraska, a cold winter and wet spring caused schedule havoc.

“We had 43 days of weather impacts that were not built into our schedule,” Sawall says. “We used a lot of lean principles, working within our team to try to move the critical path up.” 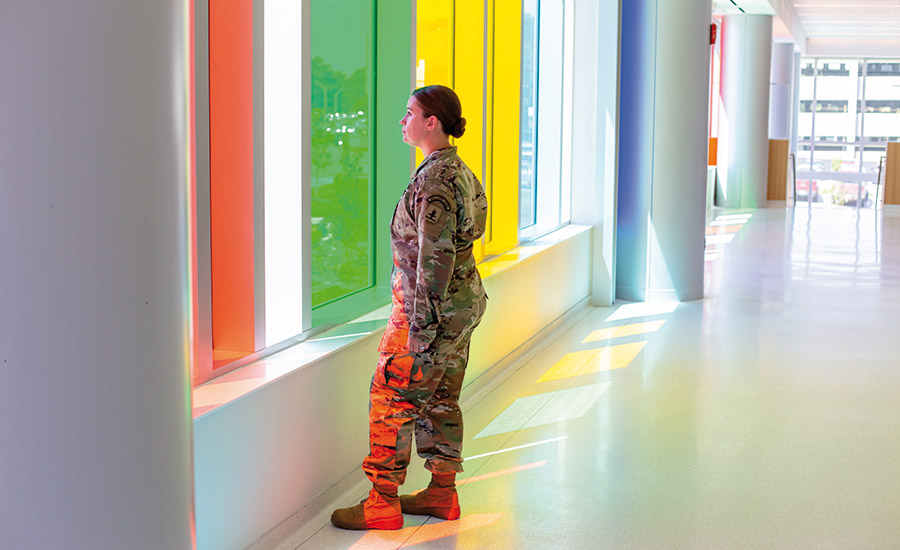 Designers added a cost-effective element by changing the color of the laminated film between two layers of glazing.
Photos courtesy McCarthy Building Cos. and Leo A Daly Inc.
*Click on the images for greater detail

The project finished with costs within 1% of the original conceptual budget estimate despite missing those 43 days of construction due to weather.

On Sept. 30, a five-year extension of the CHIP IN for Vets Act was signed into law by President Biden. Plans to replicate the success of the Omaha VA Ambulatory Care Center are already underway.

“There is one plan in Oklahoma,” Sawall says. “Our design partner was hired for that. They’re excited to be participating and we’ve been asked to provide some feedback and so has our client, Heritage.”

In August 2021, Walter Scott Jr., the Heritage Services co-founder and philanthropic driving force behind the project, died at age 90. Prior to his passing, the Air Force veteran had told Sawall and others that the Omaha VA project was a highlight of his career.