Power plants and other industrial sites in parts of the U.S., including construction material producers, may soon face more stringent nitrogen oxide emissions requirements as part of a “good neighbor” plan proposed by the U.S. Environmental Protection Agency on March 11.

The proposed rule would use a variety of regulatory strategies to reduce emissions of nitrogen oxide (NOx), a key component in the formation of ground-level ozone, which is known to have negative health and environmental impacts in areas downwind of the emission sources, often beyond state boundaries.

EPA says its proposed rule would reduce NOx emissions from the power sector by 29% and from heavy industry by 15% across 26 states during the summer ozone season.

The proposal calls for revising and strengthening an emissions trading program for National Ambient Air Quality Standards for ozone from power plants in 25 states beginning in 2023, with new emissions standards beginning in 2026 for industrial sites in 23 states that have a significant impact on downwind air quality. EPA says these steps will help states meet "good neighbor" requirements under the Clean Air Act (SEE MAP BELOW)

The proposed emissions limits would apply to sites involved in the production of construction materials such as cement, concrete and steel, as well as other products such as glass and paper, plus natural gas pipelines.

EPA estimates that the proposed strategies would prevent about 1,000 premature deaths and 2,000 hospital and emergency room visits in 2026, and at least that many each year through 2042. 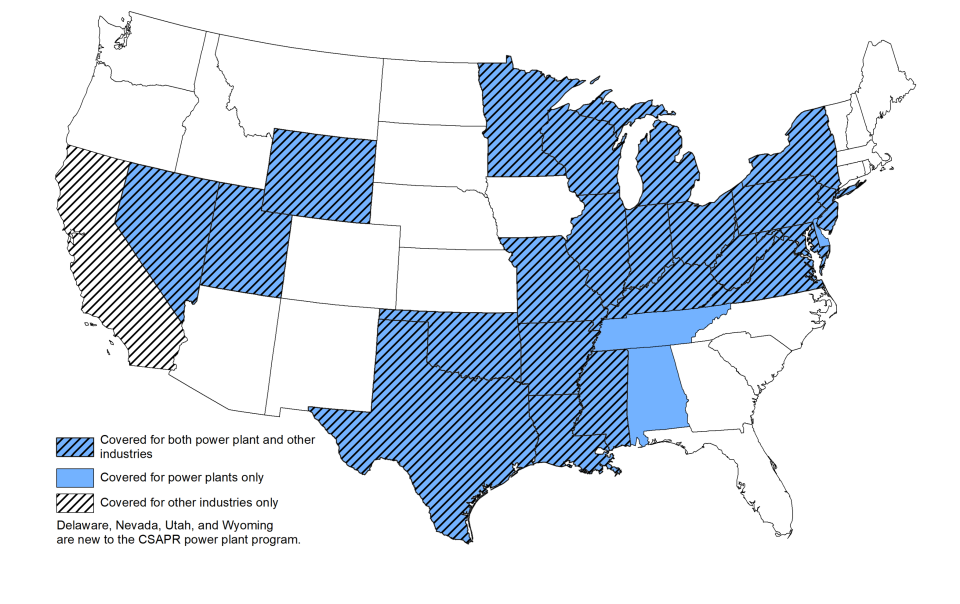 The plan would build on an existing program to promote consistent operation of emissions controls in the NOx-emitting sources. EPA is proposing daily emissions rate limits on large coal-fired plants, limits on “banking” emissions allowances and annual updates to emission budgets starting in 2025.

Alex Bond, deputy general counsel for climate and clean energy at the Edison Electric Institute, which represents the investor-owned electric company sector, said in a statement that the group was reviewing EPA’s proposal and would work with the agency on policy-making efforts.

“The U.S. power sector has reduced its NOx emissions by 88% since 1990, and, today, more than 40% of our nation's electricity comes from clean, emissions-free sources, including nuclear energy, hydropower, wind and solar energy,” Bond said.

“This common-sense rule underscores the EPA’s important role as a federal backstop when states do not fulfill their responsibilities to protect communities from fossil fuel-burning power and industrial facilities,” he said in a statement. “The huge health benefits of this rule are a critical reminder that we must rapidly transition away from damaging, life-shortening fossil fuels to a clean renewable energy future.”