Walking a jobsite with a total station in tow to perform layouts can be a time-consuming task, if only because getting survey locations just right can come down to juggling a tablet and a prism pole at the same time.

Trimble—which already offers the XR 10, a hardhat-mounted Microsoft HoloLens 2 mixed-reality headset for QA/QC and visualization tasks—is now developing a HoloLens integration for its popular FieldLink software. The layout system typically involves a total station paired with a tablet, but now these tasks can be done through the holographic visor of an XR10 headset, controlled entirely through the user’s gaze and hand gestures.

“For people doing the ‘survey dance,’ this is a significant process improvement,” says Nathan Patton, Trimble applications engineer. “[With the XR10], guide arrows get you to each survey point, which is then marked with a beam of light.” HoloLens 2 uses an inside-out SLAM mapping system to “see” its surrounding environment and anchor holographic projects to the world around the user, but the accuracy was never good enough for layout tasks, Patton says. By pairing the headset to a total station through FieldLink, the XR10 can holographically project the points where the prism pole must be placed. These activities are then tied back into the Trimble Connect data management system, so marked survey points can be updated from within the HoloLens interface. “We’ve really just replaced the tablet in this scenario with the XR10,” says Patton. 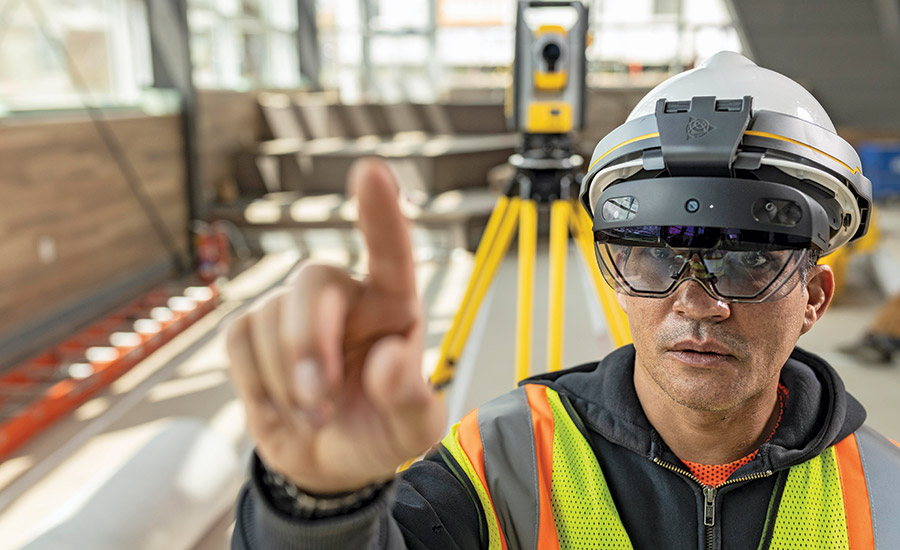 “Mixed reality is key for us, having gotten into this technology very early,” says Martin Holmgren, general manager, field solutions at Trimble. “We see the benefits and the utility of it at a general level for the AEC industry.”

Trimble is currently running a closed beta program of the XR10 headset for FieldLink with users around the world. It also recently introduced an augmented reality overlay for tablets running Trimble Connect, and is now offering HoloTint transition lenses for the XR10 headset, so it can be used in interior and exterior settings with natural lighting.