Hochul said the work will support 50,000 construction jobs and an estimated four to five years to complete. WSP|FXC Joint Venture are the lead consultants and planners on the project.

The project will remove an upper level to transform Penn Station, which was last rebuilt in 1968, into a single-level, 450-ft-long train hall with higher ceilings, wider passageways and natural light. Currently, there are ceilings as low as 7 ft in some areas.

The plan calls for 18 additional escalators and 11 more elevators to move passengers off train platforms faster and more safely, Hochul said. New entrances and underground passages connecting to 34th Street and Herald Square in Manhattan will also be added. 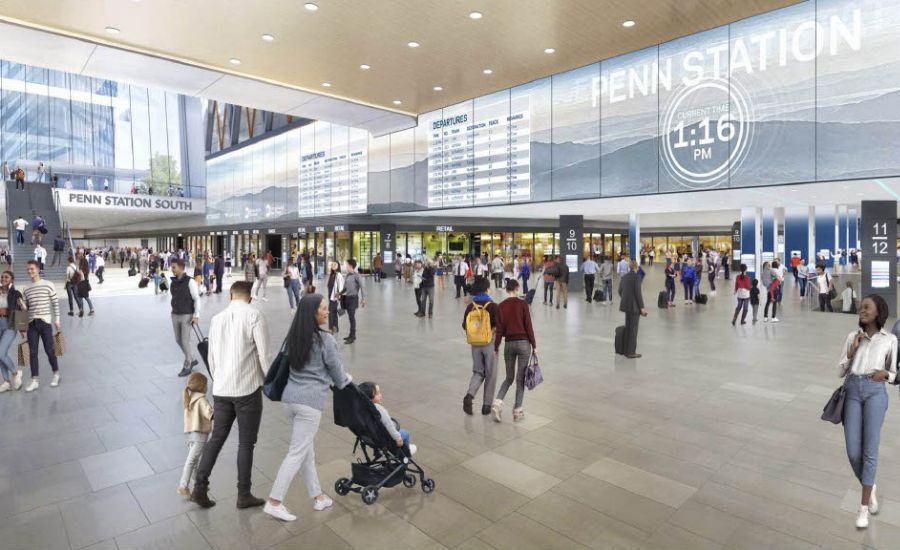 The project also is designed to account for increased ridership. The station was built for 200,000 daily riders, but before the COVID-19 pandemic, it was the busiest transit hub in the country, serving more than 600,000 people each day.

The $11.6-billion project to reconstruct two Hudson River tunnels and build a new one will increase the number of trains that can travel to and from the station each day. Acting Metropolitan Transit Authority CEO Janno Lieber—who calls Penn “the most reviled transportation facility in the country”—says the number of daily passengers is projected to reach 890,000 by 2038.

Outside the station itself, the plan still calls for construction of 10 buildings, including on a block south of Penn Station that now is the site of a 150-year-old church. However, the total building density in the plan is reduced by 1.4-million sq ft compared to the Cuomo plan. While mostly office space, the buildings also would contain 1,800 residential units, 540 of which Hochul said would be dedicated to affordable housing.

The plan will also move trucks, which line streets around Madison Square Garden that is above Penn Station, into a new loading dock area. Hochul said the new plan adds 8 acres of public space, including a pedestrian walkway with limited traffic on 33rd Street from 6th to 9th avenues.

Hochul estimated the property will generate billions of dollars in revenue, covering the costs of the work despite a rise in New York City office space vacancy tied to the pandemic.

“I believe that our post-COVID recovery hinges in large part on what we do next with infrastructure and economic development activity,” she said.

Officials did not say exactly how soon work may begin, but they want to act quickly. Lieber has said that completion of Amtrak’s Moynihan Train Hall adjacent tp Penn Station and the ability to move some Long Island Railroad operations to Grand Central Station with the opening of the East Side Access link possibly by next year, have created “a window of opportunity” for the project.