Work on the first increment of construction on the A-2 Reservoir in the Everglades Agricultural Area south of Florida's Lake Okeechobee will begin in November, following award of a $79.8-million fixed-price contract to Phillips and Jordan Inc. by the U.S. Army Corps of Engineers.

The contract calls for construction of the reservoir inflow/outflow canal, seepage canal and maintenance road along the northern boundary of the proposed reservoir. Other increments of construction will be awarded later, bringing the estimated total cost of the reservoir to $3.5 billion when completed in 2029.

When the lake water level rises and threatens the dike that impounds it, the Corps releases excess to the west through the Caloosahatchee River and to the east via the St. Lucie Canal. In recent years, high nutrient levels in those releases have triggered large blooms of toxic algae on both coasts, killing sea life and producing noxious odors.

The reservoir is being built to receive Lake Okeechobee excess and release it slowly into an associated stormwater treatment area also being constructed by Phillips and Jordan. The naturally treated water will then be released gradually to flow south through the Everglades, mimicking the leisurely “sheetflow” that created the historic ecosystem.

Added elements are the foundation and cutoff wall; reservoir embankment, outlet works and inline spillway; and the reservoir inflow pump station. Design of those increments is underway, says Erica Skolte, a Corps spokeswoman. All design will be by the agency except the pump station, which is under design by Stanley-Stantec Joint Venture.

A contract to build the foundation and cutoff wall may be bid sometime in 2022, according to the program's Integrated Delivery Schedule. Two separate contracts for remaining increments will follow, possibly in 2023. The Schedule  is not yet approved, so plans are tentative, Skolte says.

“When completed we will have built a 240,000 acre-ft reservoir covering approximately 16-sq miles,” said Col. James Booth, commander of the Corps Jacksonville District. “It will store a volume similar to about a half a foot on Lake Okeechobee.” 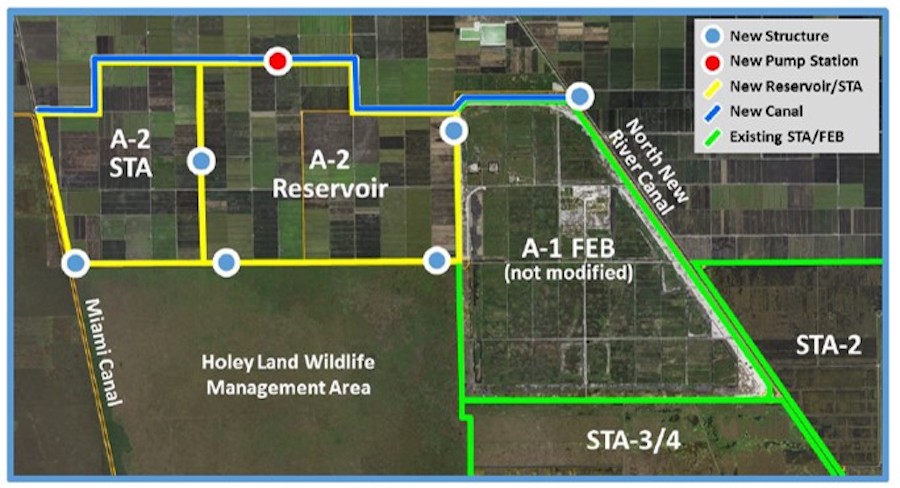 Phillips & Jordan was awarded a $79.8-million construction contract for the A-2 reservoir project, pictured in the upper left. The contractor had already been awarded a contract for the adjacent A-2 stormwater treatment area project.
Map courtesy South Florida Water Management District

The reservoir is “critically important,” says Eric Eikenberg, CEO of the Everglades Foundation. “It is the crown jewel of the restoration efforts. Florida Bay and the Keys all need freshwater” because inconsistent freshwater flow has caused seagrass, a critical component of the bay’s ecosystem, to die off.

“The reservoir will be the source of the water during the dry season,” he adds. Freshwater flow also will recharge the Biscayne Aquifer and sequester carbon, he adds.

Phillips and Jordan won the contract for the associated stormwater treatment area in February from the South Florida Water Management District. The firm is set to complete both contracts in December 2023.