Long flood-control efforts fail to prevent much damage in Millburn

When remnants of Tropical Storm Ida swept into Millburn, N.J.,—25 miles west of New York City—last week, the flooding that resulted was not a complete surprise. The 10 in. of rain that fell in New Jersey on Sept. 1, the heaviest in the New York metro area, pushed the Rahway River's west branch over its banks and into many of the prosperous town's homes and businesses.

Huge downpours regularly overwhelm the rivers, creeks and sewers of densely developed Northern New Jersey. Millburn Township Deputy Mayor Richard Wasserman told a local television station the town has long been working on infrastructure and flood control. "We’ve had this before. It’s been an ongoing effort," he said.

In some ways, Millburn's experience is an example of the state's recurring flood-control frustrations: ineffective local government attempts to hold off damage from big storms with local resources; reliance on federal funds for slow-developing big regional fixes; and disagreements with affected towns about how to proceed that further slow the process.

Now, with more menacing weather tied to climate change, New Jersey finds itself at a crossroads.

"After roughly 50 years watching floods happen in N.J., it does get discouraging,"  Daniel J. Van Abs, a professor in Rutgers University's School of Environmental and Biological Sciences, wrote in an email. "But every once in a while an issue gains momentum at the right time, and funds flow. You just have to hope that it doesn't require a total catastrophe to get that momentum." 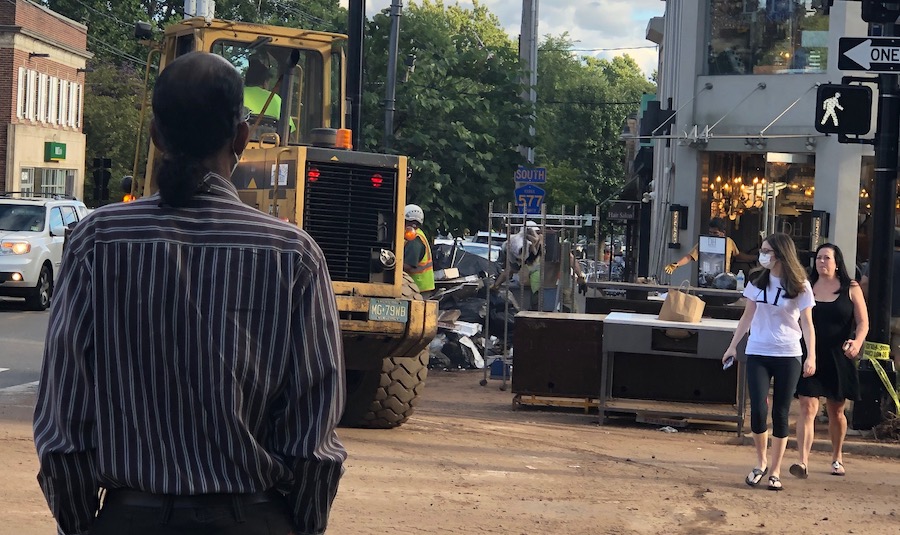 Pedestrians take in the cleanup at a key intersection in central Millburn, N.J., where a furniture store has put flooded items on the sidewalk.

This month's flooding has re-energized the issue. Across New Jersey, 27 deaths were attributed to the floods, about half involving vehicles trapped by floodwaters. Four people died in their flooded homes in Elizabeth, N.J.

“Events like Tropical Storm Ida make New Jersey’s need for climate and flood resilience solutions all the more clear and our strong state-federal partnership with the [Corps] is key to the design and implementation of mitigation projects,” said New Jersey Dept. of Environmental Protection Commissioner Shawn M. LaTourette.

Essex County, where Millburn is located, did not immediately win a federal designation as a disaster area, worrying businesses that needed access to federal recovery and resilience funds will not be available.

"Many Millburn businesses and families were devastated by the flood waters and have lost so much. Many do not have the resources to rebuild without federal financial assistance," said Heather Jenquine, executive director of the Millburn-Short Hills Chamber of Commerce. 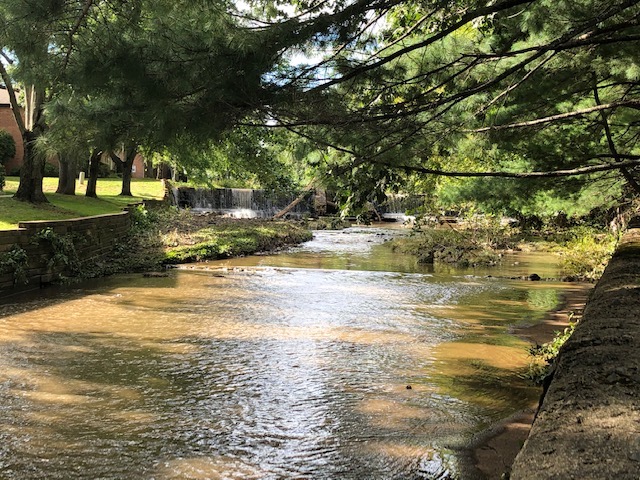 A section of the Rahway River as it flows through a residential neighborhood in Millburn, N.J. The river had days earlier topped its banks.

Hurricanes Floyd in 1999 and Irene in 2011 both flooded areas of Millburn, Jenquine noted. "There have been ongoing discussions each time about how we are going to mitigate the risks to businesses and homes. This is becoming more urgent as these weather-related events are happening with increased frequencies...we can't let this continue to happen."

Studies on the issue have been conducted on a regular basis.

In 2013, the administration of then-Gov. Chris Christie (R) funded studies by six colleges and universities in the wake of Superstorm Sandy. They were geared toward storm-surge issues not being addressed by in-progress flood control studies by the Corps.

The next year, the Corps reported findings from its Rahway River Basin Flood Risk Management Feasibility study, which focused mainly on the severe flooding risk and prior floods that had hit Cranford, N.J., about 8 miles south of Millburn. That study recommended a number of alternatives that included dredging the Orange Reservoir, expansion of a detention basin, channel changes in the sprawling South Mountain Reservation—a park and recreation area adjacent to Millburn—and damming a section of the river in the reservation.

In 2015, Millburn, with a population just over 20,000, was one of seven northern New Jersey towns along the Rahway River watershed to enter a pact to study and combat flooding. Millburn's township committee agreed to pay up to $10,000 for cost-sharing funding of surveys and studies.

Millburn also carried out its own engineering review of the flood situation. In 2018, consulting engineer Mott MacDonald, commenting on the aftermath of Hurricane Irene, reviewed the town's current flood control program. It noted that 2011's Hurricane Irene had dropped 8.92 in. of rain on nearby Newark over two days on already saturated ground. Peak stream flows during Hurricane Irene reached 8,620 cfs, surpassing those of Hurricane Floyd.

Although Millburn had installed earthen dikes, pump stations and storm sewers, Mott MacDonald stated that "flood control has limitations" and "does not eliminate all flooding."

Then 2019 turned out to be a critical year. After the Corps had outlined its alternatives involving channeling, deepening of detention basins and adding a dam in the South Mountain Preserve, the plans died on the table and the Corps sought to end its study.

The Essex News Daily, a county newspaper, said that one of the reasons was the "perceived lack of buy-in from local communities."

The main sticking point, wrote the newspaper, was one Corps alternative plan—a dam in the South Mountain Reservation, which opponents claimed would irreversibly damage the wildlife reserve and local environment.

“We either have to take it or leave it as far as a proposal to build some sort of dam up in the reservation to deal with the flooding on the West Branch of the Rahway River,” Maplewood Mayor Vic DeLuca was quoted as saying. “Opposition has been throughout this whole process that while we do recognize the severity of the flooding downstream, particularly in Union, Springfield and Cranford, that we can’t sacrifice the reservation for this. That’s what I’ve been arguing; that’s what the mayor of Millburn has been arguing.”

More broadly, the Corps' relies on state environmental officials to handle critical functions, such as understanding what local communities want and will support, says Van Abs. But the New Jersey Dept. of Environmental Planning lacks resources for long-range flood control planning, he says, "especially when it may require a decade or two of concerted effort."

The Corps essentially works in a "black box, and suddenly a report comes out or a meeting is held," Van Abs says, and the result is often conflict.

With the Corps unready to meet all local concerns, the state lacked the resources to manage a decades-long flood control effort, says Van Abs, who  himself has called for the formation of regional flood control authorities to take over and "think small," as the most realistic way of paring flood damage.

How Millburn officials now see the town's flood-control future isn't clear. Town officials couldn't be reached immediately to discuss the reported opposition to the Corps proposals or the long-range future of flood control.

Those officials are understandably busy. By Sept. 4, Millburn city officials reported the fire department was working through a backlog of 670 calls for assistance to pump water out of basements, with efforts to document damage for a federal disaster designation as another concern.

In remarks to a local television reporter, Deputy Mayor Wasserman did talk of Millburn's long flood-control efforts and its limits. "When so much water comes so quickly … I’m not sure that there’s an answer to it. You know, if 10 in. comes quickly, this happens,” he said. 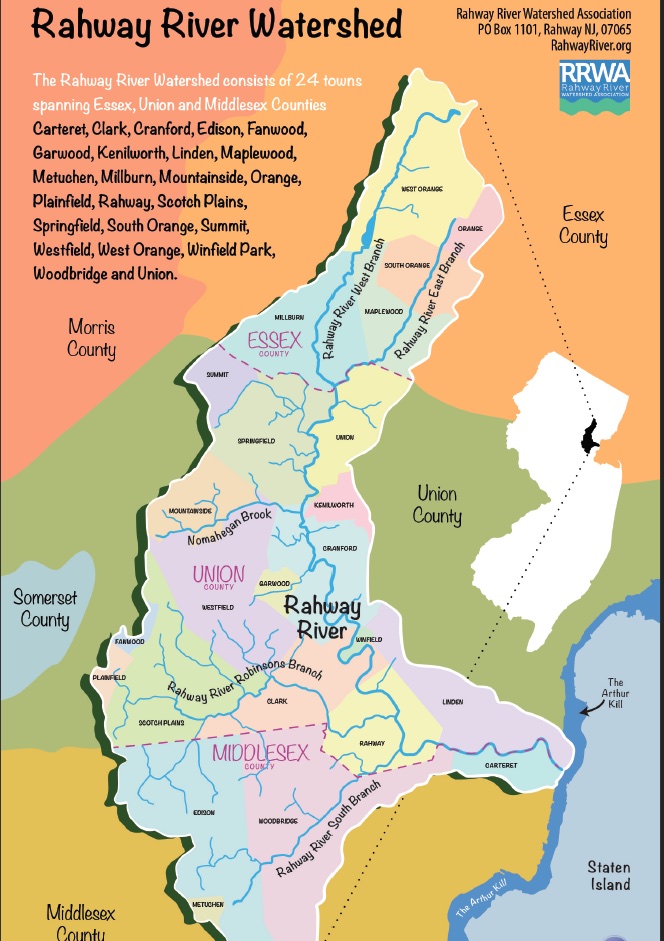 The Rahway River is 24 miles long, with four branches, and serves many purposes, including water supply as well as wildlife habitat and recreation, in the towns and counties it flows through. Map: Courtesy of the Rahway River Watershed Association