This website requires certain cookies to work and uses other cookies to help you have the best experience. By visiting this website, certain cookies have already been set, which you may delete and block. By closing this message or continuing to use our site, you agree to the use of cookies. Visit our updated privacy and cookie policy to learn more.
Home » AECOM Names CFO Troy Rudd to Replace Michael Burke as CEO
BusinessCompaniesFinance
Leadership Transition 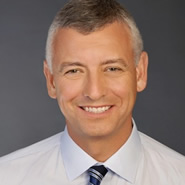 Rudd
AECOM has named long-time Chief Financial Officer W. Troy Rudd as its next CEO to succeed Michael Burke, who had announced his retirement last November after six years in the role. Also elevated to a new role is Lara Poloni, CEO of AECOM's Europe, Middle East and Africa (EMEA) region, who is named corporate president.

The publicly traded company (NYSE: ACM) said June 15 that Rudd's appointment ends its CEO search process, but the selection sparked board controversy, with three board members voting against the selection, including Peter Feld, the executive from activist investor Starboard, a hedge fund with a 4% stake in AECOM, who was named a director last year and chosen to lead the search.

Feld resigned from the AECOM board in a letter the firm reported in an 8K filing to the Securities and Exchange Commission on June 15 but not announced.

Also voting against Rudd, according to Reuters' sources, were two other directors brought on with Feld who are more familiar names in the engineering and construction sector—Jacqueline Hinman, former CEO of design firm CH2 who engineered its sale to Jacobs in 2018; and Robert G. Card, who was tapped in 2012 as CEO of Canada's SNC-Lavalin in its initial rebound from a corruption scandal.

They remain on the board.

In his letter, Feld said board leadership apparently "arranged a special meeting ... without a previously disclosed agenda to surprise certain members with a formal vote for CEO and without notifying the CEO Search Committee."  He said the move was done without unanimous board support to "rush through a decision" to name Rudd.

Rudd, who joined AECOM in 2009, had financial leadership roles in its Americas design and consulting services and AECOM Capital units as well as in corporate M&A, investor relations and other functions, the company said.

Burke, who has led AECOM since 2014, also having the chairman title, was elevated from the CFO role.

"The appointment of Troy Rudd to CEO is likely expected by [Wall Street stock analysts] as he was integral to AECOM's turnaround," said Jamie Cook, lead construction sector analyst for Credit Suisse.

According to Feld, Rudd initially told the search committee he was not interested in the CEO role and removed his name from contention, but later "re-submitted his interest in being considered."

Feld said the search committee, which had been considering other "highly qualified candidates who had expressed significant interest in the role," had been expected to complete the search in a few weeks.

According to Feld, the committee had been seeking an "operationally focused" CEO replacement based on criteria decided last year that included serving as an executive in at least a $10-billion company, experience in a "high-performing" engineering or construction business and a track record in "change leadership."

Hinman and Card were among those rumored to have been in consideration. She ended her candidacy due to insufficient board support, said Reuters, which also said that Poloni had weighed leaving the company.

The executive changes also leave unclear the status of further discussions related to a much-rumored AECOM acquisition by Montreal-based design giant WSP Global or some other combination. Talks, reportedly ongoing since early in the year, were halted in April as the developing COVID-19 crisis created new financial uncertainties for firms and the marketplace.

One industry deal maker speculates that Rudd's appointment could indicate a “caretaker” role "to get the deal across the finish line."

Andrew Wittmann, lead industry sector analyst for Robert W. Baird Equity Research, said in a June 15 report that "Implications for the WSP deal are muddied, but appear slowed for now."

AECOM's push to streamline with the recent sale of its government services business and intention to sell construction units "should enhance operational focus," said the analyst. "The risk profile is declining and returns are improving" in restructuring in the last year "and the overall quality of the franchise is improved against good market fundamentals."

Wittmann predicted that M&A "will no longer be a meaningful aspect of the AECOM investment story."

AECOM did not announce a successor to Rudd.