Construction deaths on the job rose about 4% in 2018 but the industry’s fatality rate remained level, the Bureau of Labor Statistics has reported.

The latest BLS annual report on fatal workplace accidents, released on Dec. 17, showed that there were 1,008 construction deaths last year in the private sector, compared with 971 in 2017.

The industry’s fatal accident rate held even, at 9.5 per 100,000 full-time-equivalent workers.

Among construction sectors, deaths in the heavy and civil engineering segment climbed 18% in 2018, to 180 from 152, and fatalities in buildings construction increased slightly, to 200 in 2018, from 196 in the previous year.

Specialty trade contractors had 609 fatalities last year, one fewer than in 2017, according to BLS figures. The bureau said fatality rates for individual construction sectors weren’t available. 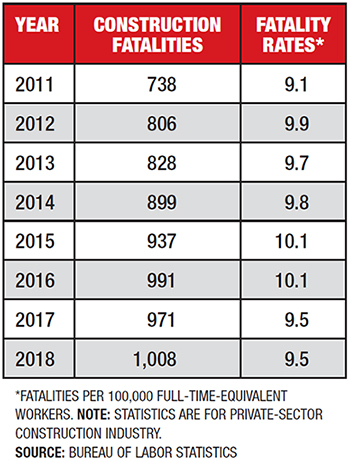 In an encouraging result, BLS pointed out that the number of fatalities caused by falls, slips and trips—among all industries— declined 11% in 2018, to 791. That compares with a high for this BLS data series of 887 in 2017.

The bureau traces the downturn in falls to a 14% decrease—to 615 from 713—in fatal falls to a lower level. The 615 total is the lowest annual mark for this type of falls since 2013, BLS noted.

Greg Sizemore, Associated Builders and Contractors said in an emailed statement to ENR, "As an industry, it is our responsibility to ensure the physical and mental health and safety of our workforce remains our No. 1 priority."

Chris Trahan Cain, safety and health director for North Americas' Building Trades Unions (NABTU), said in comments emailed to ENR, "While the number of construction workers killed on the job remains too high, NABTU is pleased the rate has not increased."

She added, "It is good news that the number of fatal falls [in the construction industry] has decreased more than 12% from 2017, however the numbers of fatalities from other causes have risen."  Cain said, "We will look closer at the data to determine where we need to increase education and outreach efforts to address preventable traumatic injury deaths in our industry."

Story updated on 12/19/19 with comments from the building trades unions.