In their competing accounts of what went wrong before last year’s Florida pedestrian bridge collapse, both the contractor and designer agree on one point: The concrete was never “roughened” at locations where it was required. The process involves altering the material to promote mechanical bonding. Among the most important locations were the key junctures where bridge truss diagonals and verticals met the bridge deck.

The March 18, 2018, collapse of the span at Florida International University in Miami is believed to have begun at the construction joint where truss members 11, a diagonal, and 12, a vertical, meet with the bridge deck in a node near the bridge’s north end.

Final connections had not yet been completed at that end, and a construction crew acting on the engineer’s direction was retensioning a rod in diagonal 11 as a way to deal with the cracks that had appeared in the area.

At that moment, the structure fell onto the road below, killing six motorists.

FIGG and MCM note that roughened concrete was not installed in all the places on the bridge that figg had intended it to be.

The National Transportation Safety Board is set to issue its final report on the disaster on October 22. It remains to be seen whether the concrete errors will be cited as the underlying cause of the collapse.

FIGG and its consultant, Wiss, Janney, Elstner Associates, have told the NTSB in an elaborately researched and illustrated statement that concrete error was the probable cause. Although the board investigation so far has found no problem with the material quality, the emphasis on concrete construction errors in reports by both contractor Magnum Construction Management (MCM) and FIGG suggest it could be a factor.

Faced with huge liability in civil lawsuits, both MCM and FIGG and their legal teams and insurers have incentives to put forward elaborately argued failure scenarios that cleared the contractor and designer of any responsibility or blame for the disaster.

The challenge for FIGG is especially great because the bridge design firm had made assurances on the morning of the tragedy that despite its cracks, the bridge remained safe.

A recorded phone message stating that the cracks were not evidence of safety problems, left by FIGG’s engineer-of-record, Denney Pate, has been widely circulated.

Neither FIGG nor anyone involved called for the road beneath the bridge to close while the crack problem was addressed.

Perhaps as important as the structural flaw is the alleged poor communication between FIGG and MCM. The two companies were working under a design-build contract with the university, in which FIGG was a subcontractor to MCM, a firm now under bankruptcy protection.

A separate company, Bolton, Perez & Associates, was employed by the university as construction inspector. FIGG was responsible for design.

When NTSB opened to the public its investigation docket, thousands of new pages within more than 100 documents, came into view for the first time. They included statements from FIGG and MCM, prepared by or with input from engineering consultants.

Among the unresolved issues that NTSB may address in its final report are questions about whether the independent peer review of the bridge design performed by Louis Berger Group, under contract to FIGG, was extensive enough for the novel bridge structure and in compliance with state rules.

The peer review’s scope was known to FIGG at the time it was performed and possibly to Florida Dept. of Transportation officials.

A view from beneath the pedestrian bridge, whose final connections had not been completed at Florida International University. PHOTO BY MUNILLA CONSTRUCTION MANAGEMENT, MCM

Another issue that NTSB may address is whether the unusual concrete truss bridge structure’s design was redundant.

A U.S. Labor Dept. OSHA investigation released in June criticized FIGG’s design for lacking redundancy. FIGG and Wiss, Janney contend that there are several different categories of redundancy and that the bridge structure’s post-tensioning provided it on the Miami project.

Still another issue the NTSB report may address is whether FIGG under-designed key nodes in the bridge structure. MCM claims in its statement to the board that FIGG failed to update its design calculations at the crucial nodes to reflect all the forces acting on them.

Whether NTSB will support FIGG’s overall theory is also important.

In an Oct. 8 press release, FIGG argued that the collapse resulted from “a failure by contractors to conform to the final bridge design plans and comply with state of Florida construction requirements.”

Under its design-build contract agreement, FIGG’s role explicitly states that it would not serve as a resident engineer but would “at appropriate intervals visit the site to determine if the construction is proceeding in accordance with the construction documents.”

The Tallahassee, Fla.-based bridge engineer specified that the “probable cause,” based upon Wiss Janney's findings, was that “the construction joint at the north end of the main span between the truss members and the bridge deck was not roughened as required” to achieve bonding between concrete components.

FIGG added, “This failure to meet the construction specification requirements was not noticed by either the contractor’s quality control personnel or by the construction inspectors under contract" to the university.

Critically, FIGG asserts that MCM and other firms on site had become aware of changes in the cracks that were occurring on the bridge in the days preceding the collapse but failed to communicate these developments to FIGG personnel.

“There is no indication that MCM, BPA (Bolton, Perez & Associates) or other project participants who were on-site during this time actively observing the cracking expressed concern with the safety of the span suspended over Southwest Eighth Street or suggested that the road should be closed until the situation was resolved,” FIGG’s report states.

Contacted by ENR, MCM did not offer a further statement but instead pointed to its own submission to the NTSB, which rebuts FIGG’s version of events with extensive details of its communications to the bridge designer. 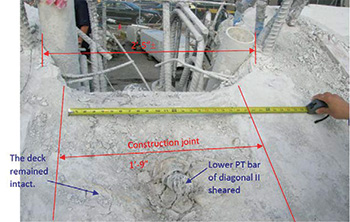 Photos provided by FIGG to the NTSB in support of its collapse analysis are labeled as showing the shear failure of a lower post-tension bar at the node where the overall bridge failure initiated. PHOTO FROM STATEMENT OF FIGG BRIDGE ENGINEERS TO NTSB

For example, days before the collapse, MCM reports emailing new photos of the cracking to FIGG, along with this message: “Following our previous emails regarding the noted cracks, and as witnessed on site by FIGG as part of the movement/erection support, attached please find photos depicting the cracks developed prior [to] and post [of] the span 1 erection and/or destressing of truss members 2 and 11.”

“It is our opinion,” the MCM email continued, “that some of these cracks are rather large and/or of concern; therefore, please review and comment as promptly as possible and advise if there is a required course of action to remedy or address these right away.”

MCM further asserts to NTSB that FIGG’s design manager, Dwight Dempsey, communicated back to the contractor that the engineer “did not see this as a safety issue.”

Minutes of a FIGG-led meeting held on site the morning of the collapse, released by FDOT in May, back up MCM’s contention that the bridge’s designers said they saw “no safety concern” from the cracks.

The record of that meeting showed, for example, that a slide from FIGG’s presentation stated: “After about an hour of review and evaluation, FIGG had conducted sufficient supplemental/independent computations to conclude that there is not any concern with safety of the span suspended over the road.”

FIGG’s statement to NTSB claims that design had nothing to do with what happened. Had the concrete been roughened, FIGG wrote in its statement to the board, it would have helped resist the forces acting on the cold joint where the truss members met the truss deck.

FIGG said in its statement to NTSB that FDOT specifications require engineers and contractors to roughen construction joints between concrete pours “after the first pour has hardened, which is important to remove surface laitance and to increase bond and shear capacity across the joint.”

Laitance is the weak layer of cement and fine aggregates on the surface of concrete that appears after curing.

FIGG said in its NTSB statement that it reiterated the requirement in an email exchange with Bolton, Perez & Associates and MCM in June 2017, prior to construction, and believed the roughening would be carried out.

After the collapse, FIGG learned from material samples, lab tests and worker interviews, the company claims, that the concrete joint under the truss member where the collapse initiated was left smooth and as-cast.

“This fact was unknown to FIGG until the post-accident investigation,” the engineer claimed.

MCM also highlighted the unroughened concrete, but MCM claimed FIGG did not provide thorough instructions in notes below all design drawings specifying surface roughening amplitude at key construction joints on the bridge deck.