The U.K. government and industry have jointly set a target to generate one- third of the nation’s electricity from offshore wind farms by 2030, up from 8% today.

The 30,000-MW target by that date will represent about one-fifth of the global installed capacity, which is forecast to grow by 17% annually till then.

U.K. offshore wind companies have agreed to invest $326.5 million over 10 years to promote local content in offshore wind investment, among other goals.

“Saying what no other government in the world is saying allows us to attract the necessary investment,” says a spokesman for the green energy trade association RenewableUK.

Offshore wind developers now are preparing to bid this May for government contracts for differences, which provide a secure, fixed price for energy generated from successful projects.

The government last July committed $730 million for biennial contracts auctions, potentially stretching to 2025. That funding allocation will cover less established technologies such as offshore wind and biomass. In the last action two years ago, three projects totalling 3,200 MW of offshore wind secured support, with a strike price for energy generated of $75.6 per kWh.

However, the need for subsidy is dwindling as offshore wind rapidly becomes more competitive. Between 2015 and 2017 contract strike prices of offshore wind projects halved, reports the Dept. for Business, Energy & Industrial Strategy. 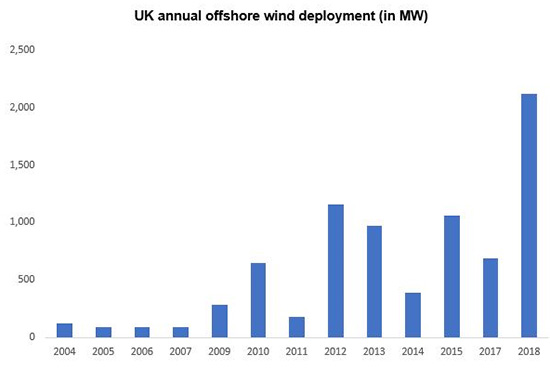