A faulty refrigerator in a fourth-floor kitchen of the concrete-framed 1970s building was previously identified as the source of the fire. Flames broke out of a window and spread up recently retrofitted aluminum composite material (ACM) cladding, enveloping almost the whole block within hours.

ACM cladding, fitted to improve the building’s insulation and appearance, included a layer of polyethylene sandwiched between aluminum sheets.

The cladding’s combustibility at levels more than 18 meters above ground was among the building deficiencies identified in the leaked report for the London police by the research organization BRE Global. Other reported failings include deficient fire stops, ill-fitting windows, absent internal door closers and poor firefighting facilities. 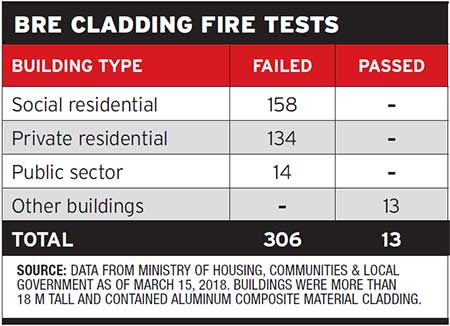 In the months after the fire, tests by BRE for the government showed widespread use of ACM that was noncompliant with regulations. Of 319 buildings taller than 18 m tested by March, 306 had failed and only 13 passed.

Debate about the fire’s speed of spread exposed a complicated regulatory regime that is “not fit for purpose,” according to Judith Hackitt, who is reviewing the regulations for the government. Existing rules leave “room for those who want to take shortcuts to do so,” adds Hackitt, who is a chemical engineer and former chair of the Health and Safety Executive.

Hackitt is due to complete her review this June. But in an interim report, key safety features “seem to have been overlooked,” claims the Royal Institute of British Architects.

RIBA wants “a thorough rewriting” of regulations and guidance to avoid “regulatory failings that led to the Grenfell Tower fire,” says Jane Duncan, chair of the institute’s Expert Advisory Group on Fire Safety.

RIBA is calling for a ban of combustible cladding higher than 18 m, compulsory introduction of sprinklers and the provision of at least two escape routes in residential buildings taller than 11 m.

The first hearing of a public inquiry into the circumstances surrounding the fire will be held in June, chaired by former judge Martin Moore-Bick.

While the public inquiry and a police criminal investigation proceed, only a handful of tall public-housing buildings have been reclad, according to government data. Meanwhile, work has started on around two thirds of the 158 social-housing blocks.

The London Borough of Camden has spent $147 million on fire safety work since the Grenfell disaster, says a spokesman. It includes $11 million to strip cladding from five tower blocks of about 20 floors each. The council expects to spend around $31 million recladding the towers with fire-resistant aluminium sheeting.

In the private sector, numerous leaseholders of apartments in suspect buildings face potentially large bills for recladding. One of the biggest afflicted developments is the 11-block, 1,000-apartment New Capital Quay in south London.

The five-year-old complex is the subject of a large compensation claim by the developer Galliard Homes on National House Building Council (NHBC), which provided individual leaseholders with insurance against defects.

Galliard, which has started legal action against NHBC, claims the insurer has “not accepted that there is a problem with the ACM cladding.” NHBC responds: “We are committed to making an assessment of this complex claim as swiftly as possible.”

While ramifications of the fire ripple through the U.K., the charred hulk of Grenfell Tower stands swathed in plastic sheeting. A team led by the chief executive of another borough has undertaken propping and “limited repairs” to ensure its stability. But no decision has been made on the final fate of Grenfell Tower.