Natural-gas pipeline construction in the United States is likely to hit a new record in 2018 as demand for the fuel stretches worldwide. But opposition to the lines in the population-dense Northeast, as well as permitting and construction problems, may dampen the potential growth.

The stop-work order came after the department found multiple instances in which developer Sunoco used horizontal directional drilling to place the pipe, rather than the permit-approved open-trench method. In several instances, the directional drilling led to water-quality problems for landowners. In another instance, contractor Michels installed a bridge over a Class A wild-trout stream without obtaining a permit from DEP. Michels, which replaced Union Pipeline as general contractor on the line last summer, did not respond to a request for comment. Sunoco, which last year merged with Energy Transfer Partners (ETP), said in an emailed statement that the company is working to address any construction issues with the $2.5-billion line. Before the company can resume work, it must develop a plan to ensure that permit conditions are met going forward.

“We intend to expeditiously submit these reports and we are confident that we will be reauthorized to commence work on this project promptly,” according to a statement from ETP. “We also reiterate our commitment to the highest levels of construction expertise.”

The Mariner East is a natural-gas liquids line—not one of the nine major interstate natural-gas lines that are set to be built this year. But, “in the eyes of the public, a pipeline is a pipeline is a pipeline. Really, everybody has got to raise the bar and start treating every project like it’s the most important project,” says Don Santa, president and CEO of the Interstate Natural Gas Association of America (INGAA), a trade organization whose members do not include developers of the Mariner East line. Last year, INGAA adopted a set of construction commitments for pipelines, including communication, quality construction, inspection and environmental mitigation.

John Quigley, Pennsylvania DEP secretary in 2015 and 2016 who has long been critical of Sunoco’s work in the state, says the work stoppage was long overdue. “They were drilling where they weren’t allowed to drill. There were incidents of groundwater contamination. It’s been a mess. No one else comes close to Sunoco’s poor track record,” says Quigley, who is now director of the Center for Environment, Energy and Economy at Harrisburg University. “Basic engineering and scouting of the route—it doesn’t appear that was ever completed properly.”

Quigley says the problems with ETP aren’t indicative of other pipeline developers or contractors, but they do “put into question the industry’s social license to operate,” he says. “Engineers and contractors have to do their job and provide quality service. When it doesn’t happen, you get problems like this.”

Problems in the Northeast and Midwest are exacerbated by the population’s unfamiliarity with pipeline construction. To move natural gas out of the Marcellus shale play in Pennsylvania, Ohio and West Virginia, pipelines are being built in areas that haven’t seen infrastructure development in decades.

Fundamentally, pipeline construction is industrial construction and comes with similar impacts and disruptions, says Brigham McCown, a former administrator at Pipeline and Hazardous Materials Safety Administration. Companies and regulators need to work more closely and to communicate better with the public, “instead of having these growing pains along the way,” says McCown, who now is chairman and CEO of Nouveau Inc., a consulting firm active in the transportation and energy sectors.

Pipelines are built to standards put in place by PHMSA, he said. Even so, incidents happen, though he stresses the problems during construction do not indicate there will be problems in the operation of a pipeline.

But that doesn’t help public perception, he acknowledges.

Quigley adds, “Smarter companies will try to work with host communities and try to adjust routes to get around some of the major concerns.”

Ken Medlock, senior director of the Baker Institute’s Center for Energy Studies at Rice University in Texas, says the geology and geography of Pennsylvania and nearby states can be challenging to pipeline operators. “There is water everywhere; it’s very different than going through Texas.”

Medlock says it’s difficult to understand how ETP didn’t anticipate problems. The company is also developing the 713-mile Rover pipeline that has faced multiple problems in Ohio for drilling-fluid leaks and other problems. “With Mariner and Rover there have been issues,” Medlock says. “The common denominator is ETP. It kind of naturally begs the question of what’s going on. It certainly demands a closer look.”

The problem is not the 300 union tradeworkers on the job, says Abe Amoros, Pennsylvania’s legislative director at Laborers International Union of North America. The DEP order does not cite the work done by the union members, who have been responsible for coding, prefabricating, postfabricating and laying the pipe. Each laborer is required to undergo 50 hours of training before beginning any pipeline work, he says. 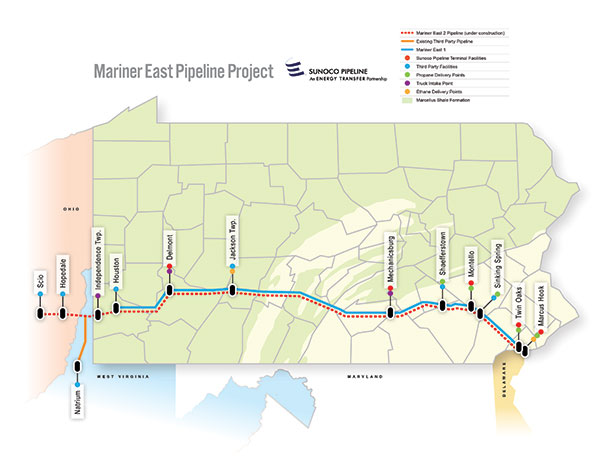 The only real problem Amoros sees is having enough workers for all of the pipeline work in the state. “We are flush with work right now, and it’s only going to get better,” he says. “We are going to need more workers.

INGAA expects that 2018, in terms of pipeline construction, will come close to the previous peak of manhours of pipeline construction reached in 2008 and may eclipse that. According to FERC’s recent infrastructure update, the commission approved 2,569 miles of pipeline in 2017 through the end of November, compared to 1,144 miles in the same period in 2016. The lines approved include the 600-mile Atlantic Coast line from West Virginia to North Carolina and the 300-mile Mountain Valley project from West Virginia to Virginia. They are expected to begin construction this year and will employ at least 27,000 construction workers.