Pollution insurance for contractors has never been cheaper, with prices down 50% in the past five years, say brokers and contractors. Even after AIG in January pulled out of the market for insuring specific sites, the industry giant chose to continue providing coverage to contractors. So, that didn’t narrow the field.

“Fifteen years ago, there were only two or three companies providing this coverage,” says James Blasting, senior consultant with Arcadis, the water and environmental engineering company. Now, about 40 companies crowd the market segment. “The competition has driven prices down,” says Blasting.

Premiums can’t go any lower, brokers say, and it is unlikely that a $5-million-a-year contractor can renew its policy and expect its premiums to go down 50%. But, in general, contractors can buy much more coverage.

Over the past decade, insurers have diversified the array of pollution types and triggers covered to fill gaps created by exclusions in contractors’ general liability policies. At the same time, insurers have pumped the coverage limits far higher than anyone has seen before. Another sign of the buyers’ market is the way the provisions that extend the effective policy coverage have stretched further into the future. Depending on what they do and how they operate, contractors can buy 10-year completed-operations coverage; further, if the policy for a single project by a larger company is written on a claims-made basis, the extended reporting period can be as long as 15 years. One insurance broker, Don Preston, co-owner of ARC-ENG Insurance Services Inc., said those terms are more likely to be available if the carrier doesn’t have to rely on reinsurance limits that could constrain what it offers.

While insurance has its origins in ancient times, environmental liability coverage is comparatively new. The policies first appeared in the 1970s, with growing awareness of environmental damage, federal environmental cleanup statutes and well-publicized disasters, such as the Love Canal. Alert to the increasing risks posed by such incidents, insurers excluded pollution from general liability policies, making it a separate covered risk.

As with most insurance cycles, swings to generous terms and low premiums eventually punish insurers, sticking them with costly claims, driving some out of the market and sending prices back up. Environmental insurance experienced its first market crisis in the mid-1980s, when costs of claims far outran premiums; also, the ballooning size of the liabilities and retroactive liability under federal law multiplied the uncertainty and risk. However, perhaps because of the hazy, long-term nature of pollution and environmental damage risks, some contractors just didn’t feel the urgency to purchase environmental insurance.

Even now, when many owners and prime contractors require coverage in their contracts, an observer could hardly say that all companies in the industry are financing their environmental liability risks with insurance. An informal new ENR survey of contractors shows that, based on responses from 77 general contractors and construction managers of all sizes, 18 had no contractor pollution liability insurance of their own. Of 75 specialty contractor-subcontractors that responded, 29 definitively answered that they didn’t have the coverage, either.

One reason contractors may be hedging their bets and not buying pollution insurance is that they assume the pollution exclusion in their general liability policy pertains only to hazardous waste, suggests broker David Dybdahl, president of American Risk Management Resources Network LLC. It doesn’t.

To cover the risks excluded by general liability policies, carriers have loosened their definition of pollution and written endorsements to include Legionella, bacteria, medical wastes and low-level radioactive waste. Insurers also have expanded the range of pollution coverage they offer or lowered premiums on previously hard-to-get conditions, including mold on an occurrence basis; non-owned disposal sites on a blanket, non-scheduled basis; disaster-response expense coverage; pollution at the Named Insured’s locations and legal defense expenses outside the limit of liability.

The more generous prices and limits are available to even the most frequently exposed contractors. In a recent article in Restoration & Remediation Magazine, Ross Driscoll Jr., vice president of National E&S Insurance Brokers, gave his assessment. He wrote that 10 years of coverage can be purchased under a $1-million to $2-million occurrence policy, in which the total insurance benefit is limited to $2 million within any one year per policy.

Even with such pricing and coverage options, Preston believes many contractors don’t understand what they are buying and will be disappointed if they discover they have an uncovered loss. What a contractor needs will vary, depending on whether it operates barges, works in mines or, say, builds slurry walls in different areas of the world, Preston says.

Jeff Slivka, president of New Day Underwriting Managers LLC, frequently speaks and writes about pollution insurance and has numerous examples of pollution incidents and events that surprised the contractors that fell victim.

For an example, Slivka cites a general contractor that was putting on an addition to a health-care facility. When a subcontractor drilled into an underground petroleum storage tank, the contents spewed out and contaminated the soil.

In another case, a contractor was putting down a tack coat of primer oil to resurface a road when a sudden rainstorm washed all the petroleum-based primer oil off the new road and into the ground and nearby storm drains, contaminating subsurface soils and water.

For example, as Slivka tells it, a drywall subcontractor working on a five-story office building in the Midwest started work before the concrete had cured, trapping moisture that spawned a mold outbreak.

And then there are the expected examples in which a building isn’t sealed properly, such as when a contractor failed to properly install the flashing around a St. Louis office building: Rainwater got into the stud cavities in the window wells and damaged the drywall, triggering a $250,000 cleanup.

Arcadis’ Blasting offers a similar assessment: Many contractors don’t understand how pollution issues can arise from routine jobs. He recalled a contractor that moved topsoil from a commercial construction site to several different disposal sites, only to find out later it was contaminated with PCBs. Result? A $1-million-plus cleanup job. Fortunately for the contractor, that job was paid through a pollution insurance policy. 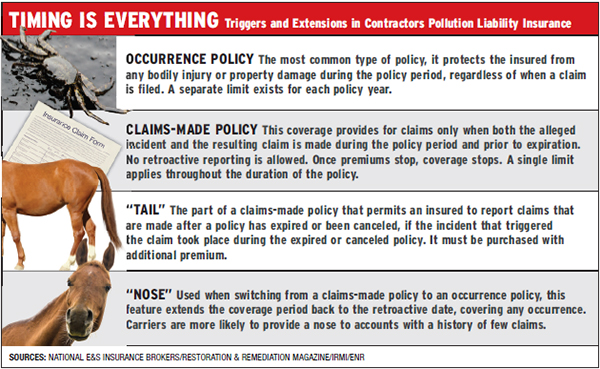 One of the most important distinctions in contractors pollution liability insurance is the difference between an occurrence and a claims-made policy (see table above). Generally, most brokers agree that occurrence insurance is better for insureds and claims-made better for carriers. “Claims-made will be much cheaper, but any time you can buy an occurrence policy with a ‘nose’ [that is, a special add-on to the policy], do it,” says Preston. “If you don’t and the market turns hard, you could end up with a price for coverage you can’t afford.”

Slivka points out that, within an occurrence-type contractor pollution liability policy, some types of coverage parts will retain claims-made triggers. Among them is non-owned disposal site coverage and microbial matter, which includes mold and bacteria. All can be provided on an occurrence basis, depending on the carrier, he says. For roofers, waterproofers, mechanical and HVAC contractors, the norm for mold coverage is likely to be written as claims-made, although some may be written as occurrence.

When a contractor switches from claims-made to occurrence-based coverage, a special add-on to the policy—the “nose”—is needed to extend retroactively occurrence coverage to include the period formally covered by the claims-made policy.

Why would carriers do that?

Not all carriers will, and they will want a “fair amount of premium to do so,” Driscoll wrote. “Still, in a time where the market is ‘soft’ and carriers’ minimum premiums have dropped as low as they can go,” some carriers will want to secure the account, he noted.

“We are in a time now where the pricing is so low that the carriers have to give more coverage away in order to compete,” wrote Driscoll. “If done correctly, writing a Nose” is one of the most important innovations available.

Such a switch means that the broker must arrange for “tail” coverage to ensure that the new claims-made policy does not exclude new pollution events arising from the contractor’s prior operations, says Aaron Millonzi, chief knowledge officer at American Risk Management Resources Network. “When it comes to coverage for fungi, or mold,” Millonzi says, “we have to be wary of how it was being covered on the expiring policy. Was coverage for fungi … provided separately by endorsement on a claims-made basis, even though the base contractor’s environmental liability policy was on an occurrence basis? … Steps need to be taken to make sure there is no gap coverage.”

Of contractors that reported that they had pollution insurance, the coverage ran the gamut. A couple of companies reported that they had “full coverage, or “standard coverage,” while others listed varying amounts of coverage, from $1 million to $10 million. Contractors said they bought specific protection against molds, spills, asbestos, lead and “accidental release.” Another contractor cited “general coverage for spills” and “mitigation of loss, microbial event; rectification, non-owned disposal sites, environmental impairment.”

Several contractors said they decided whether to buy coverage on a project-by-project basis. One $100-million-plus contractor said it requires all subcontractors to buy pollution liability insurance and that it carries $5 million in coverage for its own operations.

For contractors that don’t have pollution insurance, now may be a good opportunity to consider buying, especially since all soft insurance markets eventually end. Says Slivka, “I have been doing this for over 25 years, and pricing has never been cheaper, coverage has never been broader, and the marketplace has never been as competitive as it is today.”