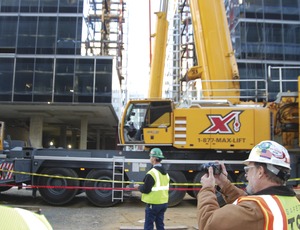 Photo Courtesy of TSI Architectural Metals Inc.
During lifts, loads imposed by crane on structural slab were a concern.

Mike Current says he almost had a nervous breakdown in anticipation of the first lift of the site-preassembled, glass-enclosed pedestrian bridges that link CityCenterDC's 11-story office buildings across a 24-ft-wide alley.

"Everyone was so adamant that [my scheme] wasn't going to work," says Current, vice president of TSI Architectural Metals Inc., the Upper Marlboro, Md.-based erector of the five bridges for the Washington, D.C., development. "There were a lot of people ... waiting for us to fail.

"I didn't sleep the night before the first lift," adds Current. "I kept wondering where my career and the company's reputation would end up if the glass started breaking."

No glass broke, but the first pick had its harrowing moments. When the 25-ft-long,12-ft-wide, one-story span, which weighs 20 tons, was suspended in the air, the lift was halted. Inspectors were concerned that the loads imposed by the outriggers of the 500-ton hydraulic crane would damage the new structural slab under the crane.

"My heart stopped for what seemed like 60 seconds while they studied the numbers with the bridge swinging 130 ft in the air," says Current.

After an inspection, everybody agreed the operation was safe and work resumed, he adds. It was just one of several cautionary work halts, he adds.

Early on, while planning the $1.5-million job, TSI learned it was not possible to build the spans in place, mostly because the alley they span is only 24 ft wide. Current then devised a way to site-preassemble 95% of the components and lift each link into position—glass and all. But the only place for the assembly line and the crane was on the right-of-way for the future 10th Street N.W., which will run alongside the buildings. The right-of-way is on the new concrete grade slab of the development's four-level basement.

TSI found a crane that could reach into the alley from the street, but there was one hitch: Because the lifting operation would impose about 175 tons on the slab, TSI had to shore under the crane's outriggers all the way down to the lowest basement slab.

Before each pick, TSI installed A-frame-shaped falsework to keep the spans from racking and the glass enclosures from breaking. The firm also installed a box-shaped lifting piece that spanned the length and width of the bridge.

Five separate engineering teams reviewed the carefully crafted erection plan. "It was tricky because there was only two inches of clearance on either side," says Christopher Crilly, senior project engineer for the bridge's structural firm, the local office of Thornton Tomasetti.

It took a couple of hours to set the first bridge. "Then, I went home and cried," says Current, a former ironworker. "It was an emotional day."

The last link was set on Feb. 13. Current says the successful operation ranks as his most difficult job by a long shot.