Items Tagged with 'North I-25' 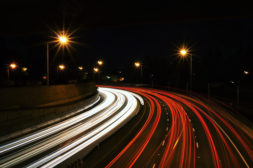 The grant will be used as part of a $230-million project that will construct one tolled express lane in each direction of north I-25 for 14 miles, from State Highway 14 to S.H. 402.

CDOT Begins Work on Extension of North I-25 Express Lanes

The new project will add tolled-lane capacity on I-25 up to the Northwest Parkway and E-470 interchange.

No Comments
The first project to reconstruct Interstate 25 through Pueblo officially got underway on July 1. The contracting/design team of Flatiron Constructors and HDR broke ground on the reconstruction of I-25 between City Center Drive (1st Street) and Ilex Street. The project also upgrades a number of bridges south of downtown Pueblo, Colo. The $69-million project consists of:•    Constructing new bridges on I-25 over D Street, the Union Pacific Railroad, BNSF Railroad and Gruma Street and replacing two structurally deficient bridges, built in 1959, that cross over Ilex and Bennett streets and the railroad tracks.•    Rehabilitating six bridges on I-25 northbound
Read More

CDOT Under Way With Design of North I-25 Reconstruction

No Comments
The Colorado Dept. of Transportation has started the design for various improvements to the North I-25 corridor. The improvements will be comprised of smaller projects that make up  Phase 1 of the record of decision for the North I-25 Environmental Impact Statement signed on December 29 by the Federal Highway Administration. The study analyzed potential transportation improvements along the I-25 corridor between Fort Collins/Wellington and downtown Denver, as well as along U.S. 85 and U.S. 287. “The design phase for the North I-25 Reconstruction project is the next step in planning for an effective multi-modal transportation system that is greatly
Read More
Subscription Center
More Videos