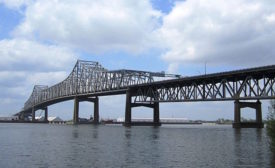 The engineer must work closely with the Capital Area Road & Bridge District, state secretary explains
Richard Korman
One Comment
State transportation secretary says he rejected AECOM appeal of design award on project worth up to $2.8B partly due to firm's existing workload.
Read More
The American Energy Infrastructure

No Comments
There are a few people in the powerplant construction business who would love to see James M. Bernhard Jr., the smooth-talking multimillionaire chairman of what is probably the world's most sophisticated pipe fabricator, The Shaw Group, fall flat on his face. Bernhard, through a series of contracting acquisitions, has gone into competition against some of his customers, including powerful Bechtel Group Inc. He began easing his way into the turnkey powerplant construction business from 1997 to 1999, adding value, he would say, to the pipe fabrication work at which Shaw Group excels. Eighteen months ago, he upset the power pecking
Read More
Subscription Center
More Videos