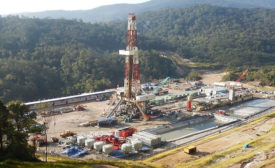 Located in North Sumatra, Sarulla will be one of the world’s biggest geothermal plants when construction is completed in 2018.

A month after his surprise win as Australia's prime minister, Malcolm Turnbull is reversing his predecessor's policy on transit funding with a $95-million commitment to a 7.3- kilometer light-rail extension in the Gold Coast area of Queensland, which will host the 2018 Commonwealth Games.

Chris Webb
No Comments
Rail officials have procured half the cost of a planned $8.1-billion tunneling project in Melbourne, Australia, but the 9-kilometer-long tunnel-boring plan, which is slated to begin in 2018, still faces political hurdles.
Read More

Chris Webb
No Comments
Related Links: Skills Shortage Challenges New Zealand Earthquake Rebuild Teams Mobilize to Rescue Survivors, Assess Damage in Nepal Seismic researchers say they have found a number of worrying anomalies in how mid-rise and high-rise buildings with reinforced concrete frames behaved during the 2010 and 2011 earthquakes near Christchurch, New Zealand.“Many plastic hinge zones in reinforced concrete beams of multistory buildings performed unexpectedly,” says Charles Clifton, associate professor of civil and environmental engineering at the University of Auckland. “It was seen that a few wide cracks developed, rather than the expected large number of hairline cracks.” As a result, the embedded
Read More

Chris Webb
No Comments
Photo Courtesy Kiwi Rail Aging rail bridges and trestles are being replaced across New Zealand. Photos Courtesy Kiwi Rail Rail bridge replacements on the South Island have to be completed on tight schedules to minimize interruptions in service. A 5.6-magnitude earthquake on January 5 gave South Island New Zealanders a sharp reminder of the devastating  quakes which damaged much of Christchurch in 2010 and 2011. It also brought much of the rail network to a temporarily standstill while engineers checked the system’s safety.KiwiRail, New Zealand's rail operator, declared Christchurch's North Line, South Line and Hokitika Line, clear to reopen after
Read More

Chris Webb
No Comments
Hemmed in on one side by the ocean shore and on the other by a major live rail line, the NZ $50-million, or U.S. $37.5-million, Ngauranga to Aotea Quay Upgrade is finally coming to grips with one of the nation’s most congested stretches of highway.New Zealand’s State Highway One (SH1) is the nation’s most important road, linking the capital, Wellington, to Auckland and running the entire length of the North Island. Traffic engineers are unplugging a number of bottlenecks to reduce journey times and improve safety as the country’s population grows and traffic increases.One urgent project is repairing a notorious
Read More

Chris Webb
No Comments
Related Links: Demolition Contractors Ask for a Larger Role in Disaster Planning Engineers Surprised by Damage to Modern Buildings in Christchurch Instability From Soil Liquefaction Remains A Danger, Says Engineer Economists predict it will take some $35 billion and 50 to 100 years for New Zealand to recover from the February 2011 Canterbury earthquake, which killed 185 people and devastated Christchurch, the nation's second-largest city. To date, the New Zealand  government has committed more than $13 billion to rebuilding the greater Christchurch area. Many projects—both public and private—are under development, including a convention center, a  $45.9-million Bus Interchange, the redevelopment
Read More
Previous 1 2 Next
Subscription Center
More Videos