Jen Miller
No Comments
Related Links: ENR MidAtlantic Long before the new Buerger Center for Advanced Pediatric Care at The Children's Hospital of Philadelphia began making its presence known on the CHOP skyline, the $450-million project was challenging engineers and contractors below ground. The construction team, led by Turner Construction, Philadelphia, excavated 70 ft down to make way for a 1,500-car parking garage, requiring one of the largest excavations of its kind in the city, according to the team."That's a pretty deep hole in the city of Philadelphia," says Gregory Ryan, Turner Construction vice president, construction executive and the project director on the job.
Read More

Jen Miller
No Comments
Zachry Engineering Corp. burst out of the recession with a full head of steam. On the heels of a tough couple of years, the design arm of Zachry Holdings is back among the region's powerhouse firms. After its regional revenue dropped from $124.5 million in 2009 to $41.4 million in 2011, the company more than doubled the total in 2012, reaching $90.4 million. That secured it eighth place on the current list of top design firms in Texas and Louisiana. Related Links: Best Industrial Project of 2009 - NRG Cedar Bayou, Baytown View Rankings of Top Texas & Louisiana Firms
Read More

Jen Miller
No Comments
Related Links: Inspector in Philadelphia Building Collapse Commits Suicide/Associated Press A veteran building inspector for Philadelphia who had checked a building prior to its deadly collapse has been found dead of a self-inflicted gunshot wound, according to city officials. He was identified as Ronald Wagenhoffer, 52.The Associated Press reported that he was found shot in the chest in a truck Wednesday night and that the longtime employee with the Department of Licenses and Inspections had inspected the building May 14 and signed off on demolition work underway, after getting complaints about the site from the public, according to Deputy Mayor
Read More 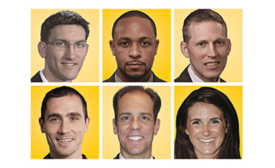 Now in its third year, ENR California's Top 20 Under 40 list makes clear that the construction industry has a deep well of talent.