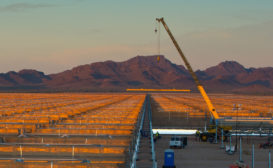 Alex Padalka
No Comments
FCC Construccion The Almonte Viaduct in western Spain is 3,268 ft long. FCC Construccion The contractor expects to complete the $130-million contract in the first quarter of 2016. Related Links: Spanish Contractors Refinance Debt To Grow Upon completion this fall, the Almonte Viaduct in western Spain will hold the record for the longest high-speed-rail bridge arch span, according to the government. Despite this imminent high-profile success, however, Spanish civil construction spending remains at a fraction of what it was before the 2008 financial crisis.The 3,268-ft-long Almonte Viaduct, located at the end of the Alcántara reservoir in the province of Cáceres
Read More

Alex Padalka
No Comments
Rendering courtesy of FCC FCC is part of a consortium that will build a $5.7-billion, 21-mile transit project in Lima, Peru; the company will have a 30-year operating concession. Related Links: Spanish Contractors Expand Worldwide Work Search Financial Times: Debt Worries Weigh on European Groups Seeking a return to growth, one of Spain's largest construction contractors is implementing a $6.2-billion debt refinancing—the largest in the country's history.Some of the country's other debt-heavy contractors are taking similar but smaller refinancing steps.Spanish contracting giant FCC Constructión is optimistic the refinancing will return the company to profit and growth, particularly in chasing global
Read More

Alex Padalka
No Comments
Related Links: Description of early outline of the Marmay Railway project, circa 1860 Article on opposition to the $7 billion Canal Istanbul Turkey is going through an intensive infrastructure buildup, with the majority of funds going toward ports, bridges and tunnels as well as a massive artificial waterway.Following the growth of the past decade, which saw the number of the country's ports double, some of the biggest infrastructure projects are still in the planning stages.Despite the unrest of recent months, Turkey still has high ambitions for continued growth. The country has grown, from 2003 to 2012, at an average annual
Read More

Alex Padalka
One Comment
Large Spanish contractors faced a turbulent 2013 but ended the year with work portfolios they hope are positioned to take advantage of the projected turnaround in the global economy, including megaproject roles on the world’s largest wastewater treatment plant and subway system.
Read More