Harry Lumen stood with his finger hovering over the button, waiting for the order.

He remembered when all of this began, when all he was, was a supervisor in the R&D division of Potestas Energy. Experimental power supplies, looking for the next source of renewable energy. It was a quiet life, a quiet job, searching for a solution that kept on eluding them.

That was until Armand Fresnel. Fresnel was a particle physicist out of Ecole Polytechnique Fédérale de Lausanne. He and his team had been experimenting with photon compression. His hypothesis was that light, when compressed to within two nanometers, would alter its fundamental interaction with matter. Introducing nanoparticles of aluminium, using surface plasmonics, where light binds to electrons, Fresnel would create what he called Hard Light—a microscopic material capable of building any rigid structure.

Fresnel's problem was instability: The light waves would travel only short distances before dissipation occurred. That is where Harry and his team came in. Potestas bought the idea of Hard Light, flew Fresnel and his team out to Boston and set them up in the department, melding Harry's unit with the Swiss team, charged with one purpose:

It took them two years to develop the containment field. Working in tandem, they discovered that the light wave could maintain continued propagation if sustained in a contained electromagnetic field. Initial tests were positive; the light could be manipulated with mirrors into any geometrical structure and then held there using the containment field. The only problem was power: It took an incredible amount of power to keep the field constant.

Potestas didn't care; they were sold on the idea, the ability to create matter from light, the commercial applications, the patents and the dollars. The bigwigs gave the green light for the first containment station, a plant that could create the combined output of eight nuclear power stations. They were going big, they wanted to show off the miracle, and they began planning the project, long before the testing phase was over. Spades broke ground in Quincy, Mass., 16 kilometers outside of Boston, on August 3, 2009. The plant was completed in a decade; they never thought twice about it, about the risk.

Phase-two testing was already completed by the time the station opened a year later. Harry had been in Wyoming, web-conferencing with Fresnel in Bern, as his team constructed Hard Light conduits in the mountains. Armand wanted to see his baby run, never mind walk. Everything was large scale; everything was rushed—too fast, too soon. Harry put his concerns forward but only collided with an ever-growing ego.

So they tested it. Distance 2 kilometers, diameter 5 meters. On a sunny July day, in the Grand Teton National Park, at 2:15 p.m. MST, Harry's team sheared a mountain in half. The first Hard Light bridge killed 400 people in a nearby town. Potestas called it "a tragic landslide," while behind closed doors it was hailed as a triumph.

The decision was made. The Trans-Atlantic Bridge was born.

Four years on, Harry's finger lingers over the button. How has it come to this? This was supposed to be the beginning of a bright new age, the inaugural day, the big opening. Still he waits for a decision.

Only this morning, he felt so different, so excited. Years of work, researching, testing, hoping—this was the moment when he could finally feel pride, feel that those lives in Wyoming weren't lost for nothing.

He and the rest of the team had gathered around the television, sitting in the control room in Quincy; final checks on the containment field complete, they all watched intently as the razzmatazz began. Tens of thousands had gathered, lining the streets, filling the parks as they scrambled to see the giant screens, desperate to catch the first images of "the big switch-on."

They had all bought the hype, gobbled up the press releases, read the details in every newspaper. The Trans-Atlantic Bridge connecting the U.S. to mainland Europe was 5,075 kilometers, end to end. Capable of carrying 1.5 million vehicles per day. Two conduits, one in Gloucester, Mass., the originator, the other in Porto, Portugal, the receptor. The beam containment field powered by the plant in Quincy. The people believed the Potestas mantra, that the miracle of Hard Light would change the way we viewed the world forever.

Potestas had spared no expense, building a podium in the center of Boston from which Fresnel delivered the opening speech, finally having his moment. Flash bulbs sparked as Armand fielded questions about technical details of the bridge:

"The qualities of Hard Light negate the forces of dead load, as the weight of the bridge is negligible, measured on a molecular level. As Hard Light has infinite load-bearing applications, under the influence of a containment field, live load and dynamic load are rendered irrelevant.

"The containment field holds the compressed photon stream in place, and the light wave follows a geodesic, the shortest path between two points in space. As the Earth's gravity would bend the light, the containment field works twofold: by straightening the flow of photons to form a rigid pathway and by compressing the photons into a solid plane." 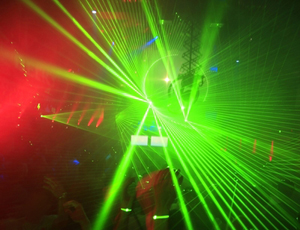 The scientific community seemed compliant enough. There were no protests or eco-warriors decrying the downsides of a mega-reactor some 16 kilometers outside of a heavily populated urban area. They all seemed too caught up in the occasion. All eyes were on the button, and when Fresnel finally started up the originator conduit and the light beam stretched out into the distance, all reservations anyone had were replaced with undiluted awe.

Three hours later, there were 20,000 vehicles making their way over the Atlantic. Families, husbands, loved ones, all part of the bright new future, pioneers one and all. It was magnificent, the project had worked, the champagne was flowing in Boston, and Harry was starting to relax.

The first alarm sounded at 1:22 p.m. EST, the second only minutes after. No one outside of the control room in Quincy heard it.

Harry knew what it was. They all knew. Months of calibration, working out scenarios, safety countermeasures; there wasn't one of them that did not recognize the alarm. The reactor core was overheating. However, the second alarm was a lot more serious.

Harry ran a diagnostic, confirmed it with his colleague, and then ran it again. Same result. There was no contingency for this; it had not even crossed their minds that the reactor vessel might rupture. Radioactive material was venting into the containment building, and it was only a matter of time before a full breach occurred. Harry made the call.

The Potestas official listened in silence at the end of the phone.

"Is there anything you can do to stop it?"

"Cut the power? You mean … turn it off? You're telling me that we have to turn it off? No, no, there must be some other way."

"The bridge is tapping too much juice. We never tested it with that much traffic. The energy usage has spiked and stayed at an unsustainable level. If we don't turn it off, the reactor will go into meltdown."

The official paused for a moment. Harry could hear that his breathing had quickened.

"I understand that. There are 4.9 million men, women and children in the Greater Boston area. If we let the core go, you're looking at multiple airborne radioactive plumes. It would be a Level 7 event," Harry answered as calmly as he could.

There was another pause.

The line went dead before Harry had a chance to reply. He wasn't being callous; he knew exactly what he was saying: condemning thousands of people to death in the dark North Atlantic waters. However, the alternative was unthinkable. It would be the worst nuclear disaster in history, rendering the U.S. Eastern Seaboard uninhabitable.

So he sat there, waiting for an answer, his finger hovering over the button that would call an end to everything they had worked toward. Waiting.

When the call came, he was relieved. Not for what he had to do, but because he knew it would be the last time he would have blood on his hands. It was a release. The dream would die with those on the bridge, and he was glad. The voice on the phone was shaky, but the decision was final.

M. Trevelean is a British fiction writer with a love for architecture. He has a history of working in property development and has overseen the funding, building and renovation of a number of commercial projects. Trevelean divides his time between New York City and Edinburgh, Scotland. He currently is working on his second novel and a collection of short fiction.