Construction Material Prices Fall in Dec. But Outpace Goods in 2022

Inflation appears to be impacting construction materials prices more than other sectors of the economy even as it eases. Construction input prices fell in December at a greater rate than the Producer Price Index, but still outpaced the wholesale level marker of inflation for the year, according to the U.S. Bureau of Labor Statistics and analyses by construction industry groups.

Economists with the Associated General Contractors of America and the Associated Builders and Contractors warn that the downturn in prices may be short-lived. Ken Simonson, AGC’s chief economist, says some construction material prices have already risen in January and some of the price declines seen in December are likely to reverse. Steel producers have already raised prices for hot-rolled coil used for some steel in construction, and some tile and insulation producers have already announced prices increases for February, he adds.

“Contractors are right to rank materials costs as a major concern for 2023,” Simonson said in a statement.

The decline in some prices could also be a sign of economic weakness in the U.S. and elsewhere, says Anirban Basu, ABC’s chief economist. Factors like Russia’s invasion of Ukraine and the demands of the reopening Chinese economy could worsen inflation, he says, adding that “contractors should not be tempted into complacency” by signs of supply chain improvement.

Prices for crude petroleum, lumber and steel helped drive construction inputs down in December, despite prices for items like concrete products and natural gas continuing upward. Overall, goods inputs for construction dropped 2.7% in December, compared to a 0.8% drop in the Producer Price Index. However, the PPI ended the year up 6.2% from December 2021, while construction good inputs were up 7.9%. 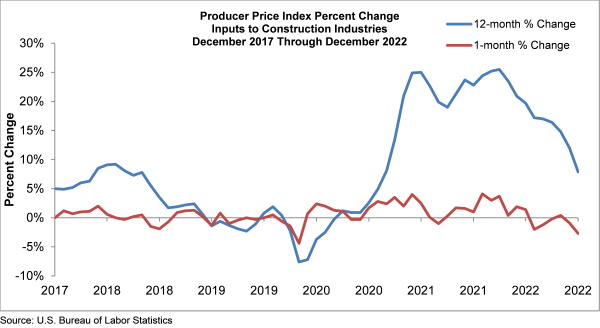 Bureau of Labor Statistics via Associated Builders and Contractors


There is also a chance the PPI data could prompt a positive change for inflation, Basu says. With recent PPI and Consumer Price Index showing inflation fading, the Federal Reserve may stop increasing interest rates earlier than expected.

“Interest rate-sensitive segments like real estate and construction would be among the primary beneficiaries,” he said in a statement.