The frozen tropical fish are cleared from city streets and the shattered glass is swept up, but the investigation could take weeks to determine what caused 1 million liters of saltwater to rush out of a failed 52-ft-tall hotel lobby aquarium in Berlin. There were no fatalities, other than most of its 1,500 fish.

Early on Dec. 16, 400 guests at the Radisson Blu woke to a crash and roar of water as the 20-year-old, 40-ft-dia aquarium, called the AquaDom, breached. Without warning, the acrylic cylinder, with its glass observation elevator rising five stories in a center void, split apart and suffered a catastrophic failure. Material fatigue of the cylinder is suspected.

As of Dec. 20, local media reported that several specialists are actively investigating the scene of the cylinder collapse, assessing damage as well as technical and structural factors linked to both the integrity of the building and what may have caused the failure. Matters of liability are still unresolved. 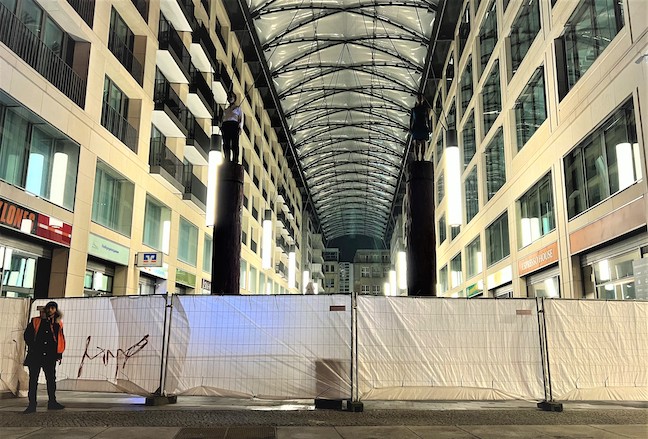 The street outside the hotel that once housed the AquaDom remained closed on Dec. 20 as crews continued to clear debris from the flooding and inspect surrounding buildings.
Photo by Michael Dumiak for ENR

Water and debris exploded outward into the street, with Berlin Mayor Franziska Giffey describing it as an “absolute tsunami.”

With temperatures outside below freezing and the tank's saltwater environment, the worst was feared for its fish, including tropical parrotfish, sharks and rays. Most died soon after the failure, but firefighters were able to scoop up three large bucketfuls of fish caught in puddles in the debris of the aquarium’s stabilizing ring, according to the Süddeutsche Zeitung newspaper.

Berlin state interior minister Iris Spranger told German press agency dpa that initial indications point to "material component" fatigue. Uwe Abraham, managing director of the Berlin Society for Large Aquariums, told Berlin newspaper taz that leaks had prompted repairs over the last two years. He did not know if the renovation was linked to the failure. “I’m at a loss,” he told the publication.

The custom acrylic cylinder was developed by Reynolds Polymer Technology Inc., an engineering firm based in Grand Junction, Colo., which sent a team to investigate the burst.

"At this point, it is too early to determine the factor or factors that would produce such a failure," said the firm in a statement. "Reynolds Polymer manufactured and installed the cylinder component of the tank in 2002."


Complex Installation for a Unique Attraction

In 2002, a Reynolds Polymer team was in Berlin working on transport of imported acrylic panels, and assembly and installation of the 35-ton aquarium, which was lifted into place by a crane over the top of the hotel construction site. The aquarium, next to the landmark Berlin Cathedral, became a major tourist attraction.

Made of fused acrylic panels sitting on a concrete base, the aquarium has a design that differs from many other massive ones, which tend to be reinforced concrete tanks with acrylic viewing panels built into them, said ENR in a 2015 review of the World's Top 10 Largest Aquarium Tanks.

Germany’s Spiegel did a video report on the 2003 AquaDom tank installation.

[Click here if the embedded video does not load. German audio, with Youtube auto-translated subtitles available. The 2003 video on the installation begins at 0:50].

In another 2003 clip from broadcaster WDR, AquaDom architect Michael Jessing says even handguns would not burst the whole cylinder. At most, bullets could make a small hole where a little water could come out. “Really, that kind of Hollywood scenario, or worst-case scenario, couldn’t happen here,” he said.

Reynolds Polymer said it "offers its sincere concern to the hotel guests who were displaced by this incident, all of the hotel workers affected and those who were injured. We are also deeply saddened by the animals and aquatic life lost. We offer our gratitude to the workers and first responders who were able to save some of the fish and relocate them."