Originally built in 1967, the Ken Soble Tower, an 18-story, 80,000-sq-ft-affordable housing facility for seniors in Hamilton, Ontario, provides a notable example of how aging buildings can be retrofitted to meet modern decarbonization goals.

The design and construction team, led by ERA Architects and contracting firm PCL, jumped through hoops to achieve the tough energy reduction requirements associated with the Passive House standard that were mandated by CityHousing Hamilton, the building’s owner. The project team not only met the Passive House standard, but easily surpassed it. The building is currently the largest Passive-House certified building in the world, says the project’s chief designer, Graeme Stewart, a principal at ERA Architects.

The internationally recognized Passive House standard requires buildings be designed to be virtually airtight. Facing the formidable task of achieving no more than 0.6 air changes per hour, the team used a high-performance envelope to reduce the building’s heating and cooling needs and tested for any air leaks throughout the application of the envelope. 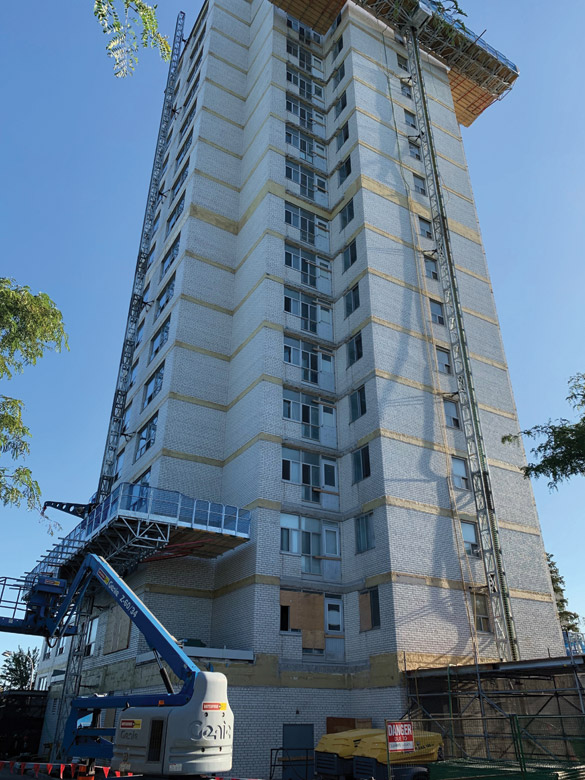 By the end of the project, the team had not only achieved the stringent 0.6 target, but also surpassed it, with only 0.4 air changes per hour, says Stephen Montgomery, PCL’s sustainable construction advisor. Since the project’s completion, the rehabilitated building has seen a 94% drop in greenhouse gas emissions and a 91% decline in annual heating and energy demands. Architect Stewart notes that although the goal was ambitious, “it’s not rocket science. This is absolutely doable.”