Owner: Ministry of Transportation of Quebec

Special projects are built from good decisions, and the Canal Lachine cable stayed bridge—the symbolic centerpiece of the $1.3-billion Turcot Interchange reconstruction project in Montreal—is such a project.

Matthias Schueller, practice leader for long span bridges at Parsons, which was part of a design-build team hired by the Quebec Ministry of Transportation, had to make several key decisions about design concepts and details. One involved the extradosed design and structural plan for supporting the curving bridge deck: the solution was multiple mini box girders tied together to one very large steel grillage system. He says the design constraints meant that the girders and deck grillage had to bridge a 289-ft-long main span with only a 6.6-ft-deep girder along the deck’s inner curve.

Schueller says that another key decision involved isolating, via a friction pendulum bearing, the substructure from the superstructure so that the deck and the single central pylon from which the cables radiate act together in a unit like “a sailing ship.” A third decision involved limiting joints on the bridge deck so that they only occur at the abutments, which was intended to help protect the box girders and other components from moisture and to lower maintenance costs, he points out.

In service since 2020, the bridge and overall Turcot Interchange replace structures that were built in the 1960s. The new interchange and bridge are supposed to spark the transition of primarily industrial sections of the city to mixed work, living and recreational areas.

The pandemic, as well as a six-week government shutdown in early 2020 that included all Quebec construction, could have played havoc with the schedule, but did not.

Much of the basic structure was already in place, so COVID-19 only delayed pavement work and affected the procurement of certain items such as cable stays produced in Spain. Impacts to the bridge and other project work were limited, however, and only pushed back final project completion to August 2021 from June, says Sébastien Djan-Chékar, construction manager for Kiewit, which along with Parsons and CRH Canada formed the general contractor team.

“The client was extremely happy that the loss of a spring season didn’t delay the project longer,” adds Parsons project manager Jihad Riachi.

Compared to problems imposed by the COVID-19 delay, larger complexities existed in minimizing impacts to the daily passage across the site of 300,000 vehicles and 50 trains while providing enough space to build the new interchange.

The new bridge deck had to be built partly within the footprint of the existing bridge. The bridge deck was 25 m above the canal because of tall vessels that used it at the time. 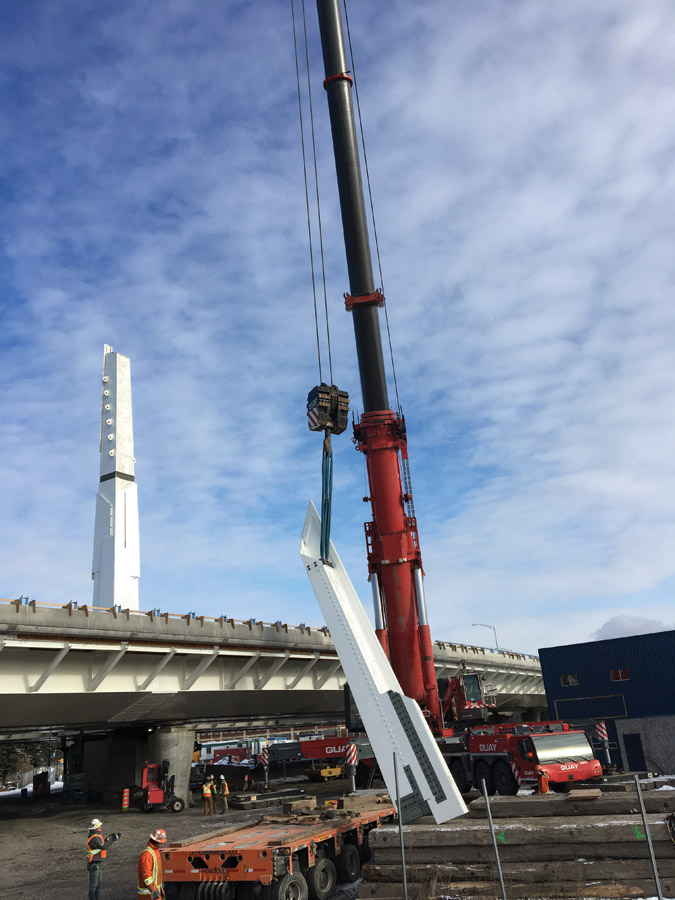 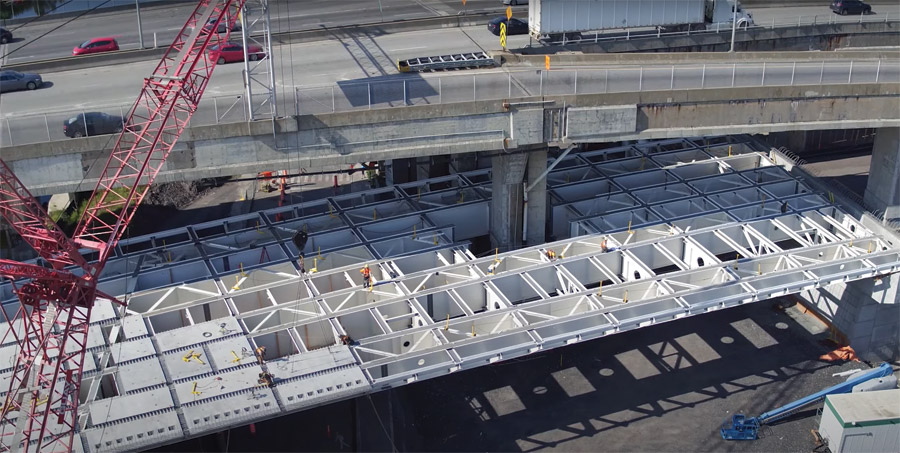 The new bridge pylon (above) was lifted into place and the deck was built beneath and beside active traffic, requiring many temporary structures and a temporary opening in the deck for an existing bridge pier (below).
Photos courtesy KPH TURCOT

But building the new bridge close to and partly beneath the old one forced the project team to make many calculations regarding temporary loads and to juggle traffic management needs with phased construction.

Essentially, the team designed and built two types of bridges: a standard bridge on piers during phased construction and another that later became the functional, final configuration with cable stays. That included optimizing design of the cross frames to sustain loads during different phases, says Kiewit’s Djan-Chékar. A 3D model of existing and proposed structures was built to identify potential conflicts and to allow for precise work and phasing.

One unusual aspect of the project was that an opening had to be left in the new bridge’s deck framing during construction for one of the existing bridge piers.

There were other interesting problems, says the project team. Design calculations were performed to study the structural stability so that traffic could be transferred to the new bridge before the main pylon and cable stayed system was in place. Also, demolition with old and new structures so close to each other had unique challenges.

Temporary supports were constructed for demolition equipment and concrete rubble. A large mobile steel deflector had to be fabricated to protect new structures, while an ice bridge was built to access sections of the work.

Originally planned more than 15 years ago, the Turcot Interchange reconstruction program was one of the largest in the transportation ministry’s history, and the product of many good decisions.