Project of the Year

More than 10 years in the making, Bay View represents the first time Google developed one of its own major campuses, with the goal to rethink how building systems integrate with nature to provide healthy, sustainable places for people to work.

The original architectural scheme put forward a decade ago for the site—leased from NASA’s Ames Research Center alongside the San Francisco Bay in Mountain View, Calif.—was scrapped by Larry Page, Google co-founder and former CEO, as too conventional. He instead wanted a nearly column-free interior to foster communication and spontaneous collaboration—termed “casual collision” by the company, says Kevin Antonelli, senior director of construction at Google. 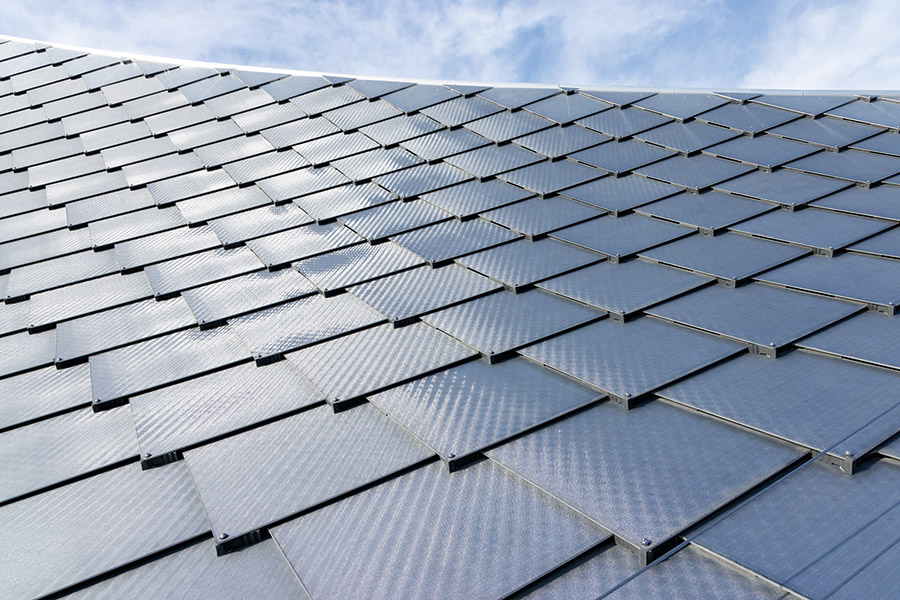 When short-listed contractors arrived for their interviews for the job, they had their first inklings of the unconventional project that might lie ahead. At the start of each interview, the bidder was told to toss aside PDFs and prepared speeches. Instead, each contender put together a schedule and budget on the spot as the selection panel from Google observed how each team’s members worked, says Antonelli.

“You could tell right away the [contenders] that were ready to interact,” he adds. “And it became evident at that point that Whiting Turner was the right team: the way they got together, the way they communicated, asked questions and gave feedback.” 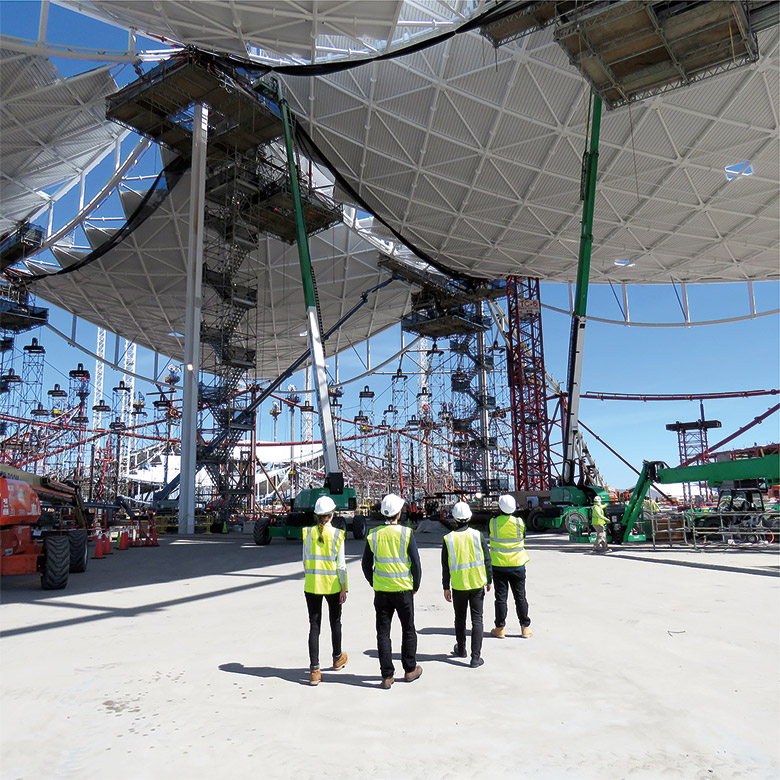 The project also required uncommon feats of construction. For example, to create the distinctive, sweeping roof canopies covering more than four football fields of interior space in the largest of the two office buildings—with columns spaced 120 ft apart—seven fabrication plants prefabricated structural steel bays into modules that were then transported to the site. Crews connected the modules, on the ground, to longspan trusses before using strand jacks to raise the assemblies into place.

The largest, record-breaking roof lift—12 bays of prefab framing connected by 32 trusses totalling more than 180,000 sq ft of roof structure and weighing 2,600 tons—required 42 individual strand jacks synchronized atop 21 columns. The motivation for the operation, which took about 36 hours, was to get interior work going as soon as possible.

Preassembled components went beyond the steel structure. In the main buildings, workers installed modular electrical rooms built and inspected in Texas and shipped to the site. In addition, all 240 modular residential pods—down to the towel rods and faucets—were prefabricated across the bay, moved to the site and set in place. 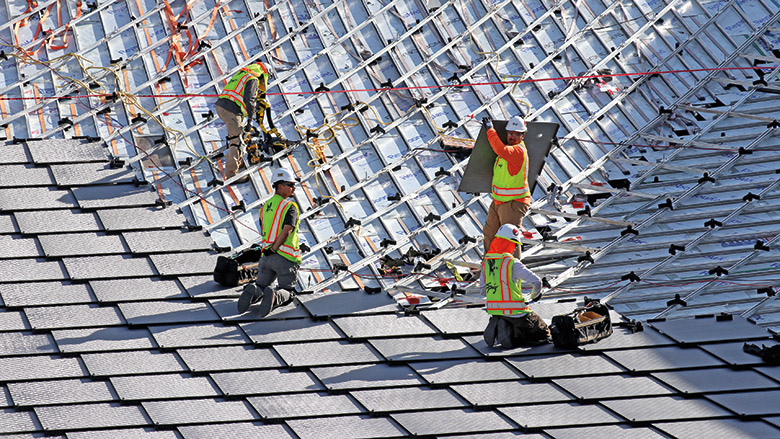 Part of the overall strategy from the start was to take the massive building, with its innovative structure, and break it into more manageable components. “We were always looking for opportunities to prefabricate and modularize” to boost efficiency, jobsite safety and quality, says Yayu Lin, chief operating officer of the commercial division at Sares Regis Group of Northern California, a developer that partnered with Google on Bay View and other projects. 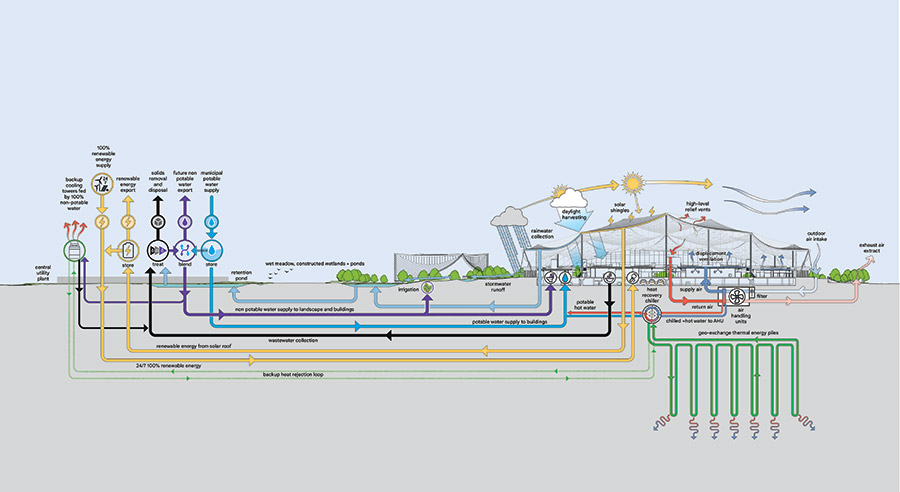 There are two levels of work stations and circulation spaces under a broad canopy. The workspaces are formed using the proprietary ConXtech—a bolted framing system for interiors that is independent of the building’s shell. The standalone system allows Google to reconfigure or repurpose the fitout of the entire tent-like building.

Instead of one flat surface on the second level, the floor plate is tiered like a wedding cake by a series of 30-in. risers that step up progressively from the edges toward the center of the building. The risers ensure all work areas have outdoor views, Turpin says. 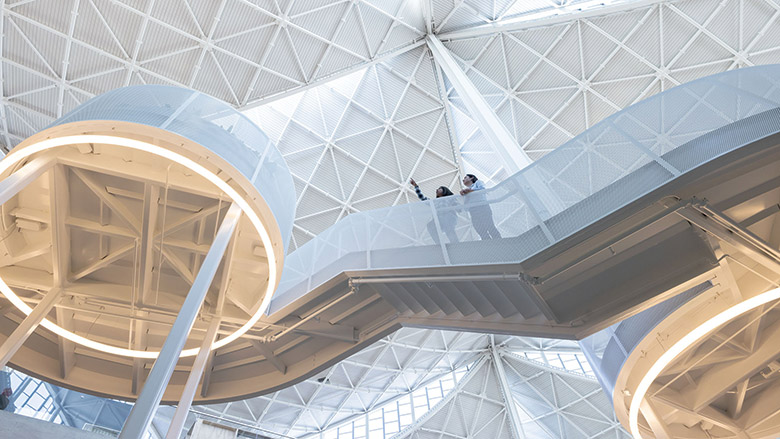 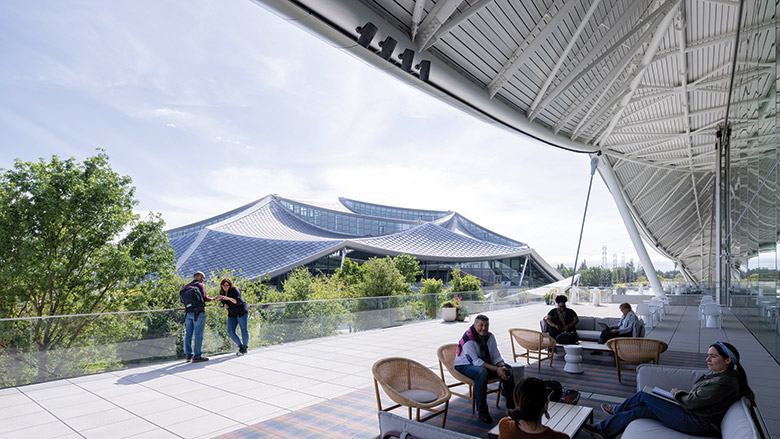 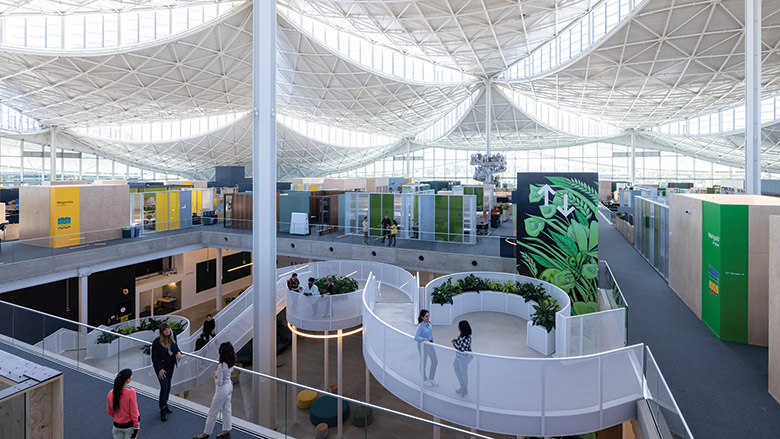 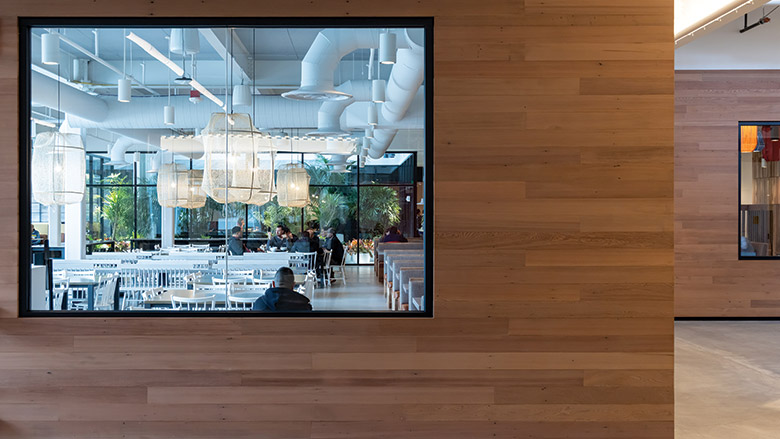 The campus offers ample space for circulation, casual discussions, teamwork environments and spaces to eat and relax.
Photos by Iwan Baan, courtesy Google
*Click on the images for greater detail

The first level serves primarily as circulation and meeting spaces, and includes 22 building-height covered courtyards that penetrate the second level. Each has custom theming and artwork inspired by the annual Burning Man event, which serves both as placemaking and wayfinding in the maze-like space, says Jeffrey Curry, director of construction process controls.

To boost thermal comfort while also lowering energy usage, the campus features a 100% outside-air system with overhead displacement ventilation on the first level supplemented by radiant systems in perimeter zones, and a second-level underfloor air distribution.

Heat-recovery chillers condition the air. The system links to what Google says is the largest geothermal pile installation in North America. The team saw an opportunity to concurrently install closed-loop piping through 2,200 of the foundation’s approximately 4,000 piles, roughly 80 ft deep, to take advantage of the thermal mass below the building. The system performs like a thermal battery to store heat in the ground during the summer and extract the heat in the winter, says Asim Tahir, Google’s director of energy and carbon. It also eliminates the need to run a cooling tower, except during peak heat days.

The design team estimates the system will reduce operational carbon by almost 50% and water used for cooling by 90%. 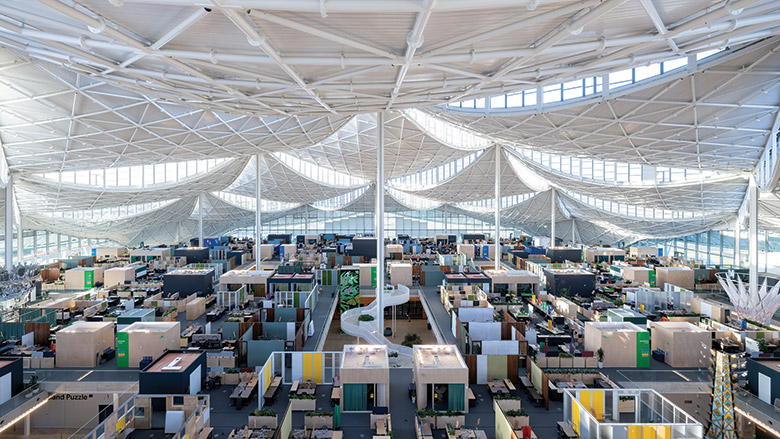 Workspaces are separated by a variety of seating areas, walls and modular components that mitigate acoustic pollution.
Photo by Iwan Baan, courtesy Google

The distinctive roof design serves multiple functions, including collecting stormwater for nonpotable uses. The water is stored in collection ponds and then drawn down, treated and combined with building wastewater treated at an onsite plant, also for nonpotable uses, to provide a net-positive water system. The facility is targeting Water Petal certification of the International Living Future Institute’s Living Building Challenge (LBC). If successful, it will be the largest structure to attain the petal, says Google. Last month, the project received LEED-NC v4 Platinum certification, the largest project to receive the certification, Lin says.

The unique shell-like roof shapes also improve the power generating efficiency of approximately 50,000 “dragonscale” solar panels that Google co-developed with a Swiss supplier. The distinctive textured, prismatic plates trap sunlight that would normally be reflected from traditional flat panels. The armor-like panels interlock and cover much of the roof to generate about 40% of the building’s annual power. The all-electric campus operates on 90% carbon-free energy when the 4 MW of solar output is combined with power from nearby wind farms.

Virtually every material used in construction went through a stringent quality control review that also followed LBC’s Red List requirements. “We vetted around 3,950 materials not just for the component and the makeup of the material, but also in the manufacturing process, whether they produce any harmful byproducts,” says Lin. “That’s all taken into consideration.”

Bay View includes a 1,000-person events center with one of the largest display screens in the U.S.
Photo by Iwan Baan, courtesy Google

Weather proofing, sealants and caulking were the most challenging categories to vet, adds Curry.

Built as much to serve occupants as to prototype and test sustainable building solutions, Google is spinning lessons learned at Bay View forward to its adjacent Charleston East campus currently under construction and to other facilities around the Bay Area, including Caribbean, a five-story office building with a sloping green roof, planned for Sunnyvale. These strategies will further Google’s goal to replenish 120% of the water it consumes by 2030 and to operate 24/7 on carbon-free energy worldwide, also by 2030.

“We are part of something extraordinary … a once-in-a-lifetime opportunity to do something greater,” says Lin. “We knew we were trying to help Google achieve innovation on multiple fronts, and that really took building a team that was committed to Google’s vision of pushing the boundaries of our industry.”