New Zealand’s first extradosed bridge will be the centerpiece of the $320-million O Mahurangi Penlink project in North Auckland. It will be designed and built by a consortium that includes VINCI subsidiary HEB Construction. The 4.3-mile, two-lane highway will include five other bridges as well as a shared-use path for pedestrians and cyclists. The project team says it will use design and construction methodologies that achieve a 20% reduction in carbon emissions compared with traditional approaches. For example, a lowered entrance to the 1,804-ft-long extradosed bridge will shorten the overall length by more than 770 ft, reducing the steel and concrete needed while complementing the landscape. Construction is scheduled to be complete in 2026.

Yapi Merkezi of Turkey has begun construction on the 228-mile third phase of the Dar es Salaam-Mwanza railway. The four-year, $1.9-billion project between the cities of Makutupora and Tabora will include seven stations plus signaling, telecommunications and electrical systems. Yapi Merkezi constructed the first and second sections of a 757-mile freight and passenger rail link between the Indian Ocean and Lake Victoria. The firm signed a $900-million contract with Tanzania’s government to build a 102-mile section in the country’s northwestern region.

A Webuild-led consortium has won a $1-billion contract to design and build a 23.2-mile section of the new Sibiu-Pitesti Highway. To cross the Carpathian Mountains, the project will include a mile-long twin tunnel and nearly 50 viaducts totaling 7.7 miles. Other features include 14 miles of double-lane highway, two interchanges, a maintenance and control center and an animal crossing at the Olt River.

The joint venture of CPB Contractors and United Infrastructure will provide surface civil and alignment services for the Sydney Metro-Western Sydney Airport rail link between Orchard Hills and the new Western Sydney Airport station. The two-year, $395-million project includes more than 4 miles of earthworks, a 2.1-mile elevated viaduct, two bridges and access roads. CPB Contractors has other projects at the airport, which will begin operation in 2026.

Construction is underway on a key 1.2-mile section of the new E18 Western Corridor near Oslo. Skanska is building the $295-million, six-lane highway, which will include a 3,900-ft long tunnel as well as changes and upgrades to the surrounding road system, a new bridge and retaining walls. The E18 will replace one of the country’s busiest road systems, reducing congestion and improving accessibility for public transportation.

New Terminal Will Double Capacity at the Port of Gdansk 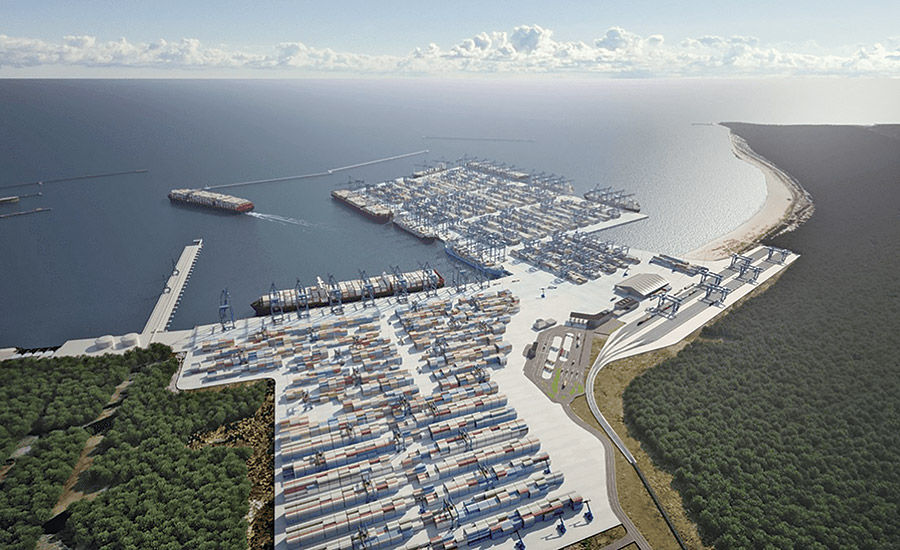 Budimex, a subsidiary of Ferrovial in Poland,is teaming up with Dredging International, a DEME Group company based in Belgium, to build a new $258-million terminal in Gdansk, on the Baltic Sea. Spanning nearly 3.9 million sq ft, the project will include a 2,350-ft-long deepwater pier and a 2,300-ft-long mooring front that can accommodate the largest container ships currently in operation. When completed in early 2025, the project will boost Gdansk’s total capacity to 4.5 million containers, making it one of Europe’s largest ports.