U.S. offshore wind energy has officially gone bi-coastal, with the U.S. Interior Dept. set to auction on Dec. 6 five ocean areas totaling 373,268 acres off northern and central California that it says could produce more than 4.5 GW of clean power and would be America's first development on the Outer Continental Shelf using floating wind turbines.

Developer interest is high with 43 bidders qualified to vie for five leases, located in three deep-water areas off Morro Bay in central California and in two areas off Humboldt Bay in the northern part of the state, located about 20 miles offshore, said the department in announcing its final auction notice on Oct. 18.

"California is the second most-energy-using state, the fifth largest economy in the world and a renewable energy pioneer, setting a goal of transitioning to 100% clean retail electricity by 2045," says the U.S. Energy Dept.'s National Renewable Energy Laboratory (NREL).

In a key change, the Interior notice says that bidders can win only one lease, Jim Lanard, CEO of floating wind developer and potential bidder Magellan Wind, told ENR. It is set to be published in the Federal Register by Oct. 21.

In its bid, Magellan has teamed with Copenhagen Infrastructure Partners, developer of Vineyard Wind, the 2.8-GW Massachusetts project that now is under construction as a fixed-bottom multi-turbine project that will be the country's first utility-scale offshore wind development. 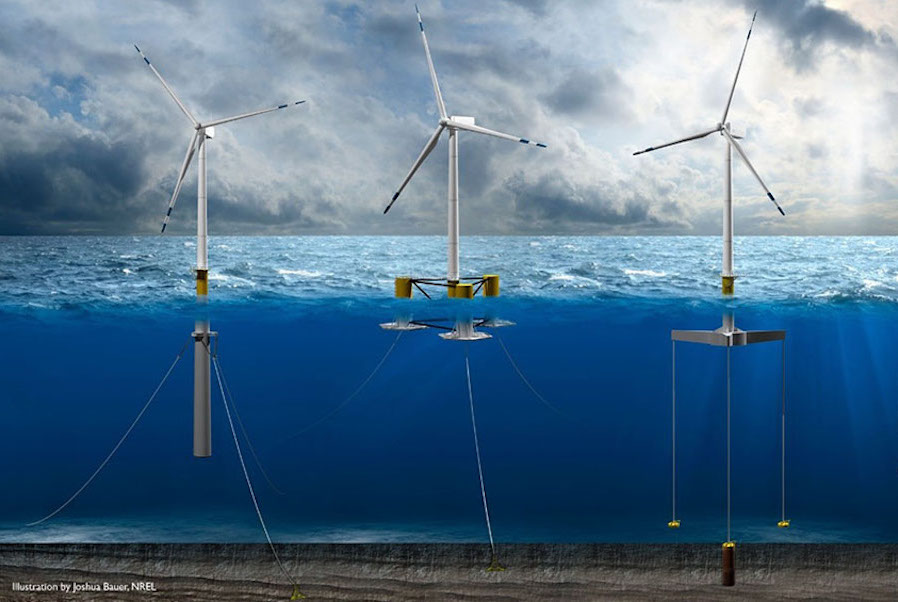 The department's Bureau of Ocean Energy Management earlier this month said its environmental review of the Morro Bay offshore wind development area found that "responsible commercial development will have no significant impacts."  A similar assessment of the Humboldt Bay area was released in May. Further reviews will be done when winning bidders submit a project construction and operations plan, BOEM said.

"We know more than half the nation’s offshore wind resources are in deep waters and floating wind is going to help reach those areas that were thought unobtainable, said BOEM Director Amanda Lefton, in announcing the lease auction at an industry conference in Providence, R.I.

BOEM will require winning bidders to “make every reasonable effort” to enter into project labor agreements. It will also offer bidding credits for those that enter "community benefits" agreements and invest in workforce training or supply chain development. Bidders also must engage with tribes, underserved communities, ocean users and agencies, it said.

“This is very important as communities will feel the benefits, and possible impacts, of offshore wind projects," Alla Weinstein, Castle Winds CEO and founding CEO of Trident Winds, told ENR. She has been involved in west coast offshore wind energy development since 2016, when Castle Winds submitted the first unsolicited lease request to state and federal agencies to develop a Morro Bay area project.and signed an agreement with the city of Morro Bay.

Weinstein said the value of federal credits "should have been higher for the community benefits agreements.”

Floating offshore wind energy development is set for more U.S. growth. In mid-September, the White House launched a program to accelerate breakthroughs across engineering, manufacturing and other areas to reduce the cost of its energy production by more than 75%, to $45/MWh by 2035. The administration also set a goal for 15 GW of floating offshore wind capacity installed by 2035, in addition to the existing goal to deploy by 2030, 30 GW of offshore wind primarily using fixed-bottom technology.

“These recommended practices cover a broader scope than anything previously available to the offshore wind energy industry,” said Walt Musial, a mechanical engineer who leads NREL offshore wind research and heads the expert group. "Regulators hold responsibility for all stages of development—from cradle to grave—and we’ve now provided them more comprehensive guidance in one document. ” He says it could lead to speedier regulatory approvals and increased worker safety.

Other standards set to be approved by ANSI this year address requirements for floating wind technology, submarine cables, meteorological and oceanographic data and geotechnical and geophysical standards.

“The U.S. offshore wind industry should see this as a huge opportunity," Tony Appleton, offshore wind director at Burns & McDonnell told ENR. "If we can train the resources and develop out the supply chain, the U.S. can become a net exporter in global offshore wind,”