The Theragent project utilized an existing office and warehouse building for a new cell and gene therapy manufacturing facility. The 26,000 sq-ft warehouse space is made up of two areas: cleanrooms and support labs and rooms. The cleanrooms used a pre-engineered, prefabricated modular system featuring four “flex suites'' with 100% outside air circulation, and supporting infrastructure. These rooms feature a walkable ceiling which is supported by a structural frame.

The labs were designed to maximize natural light into the space and transparency with large exterior windows as well as floor-to-ceiling glass into the interior corridor. The project also included an upgrade of the exterior façade and sitework, for both functionality and aesthetics to match the facility inside.

A major challenge for the project team was meeting aggressive schedule milestones, particularly as it related to permitting, as speed-to-market is one of the biggest drivers for Current Good Manufacturing Practice (cGMP) projects. 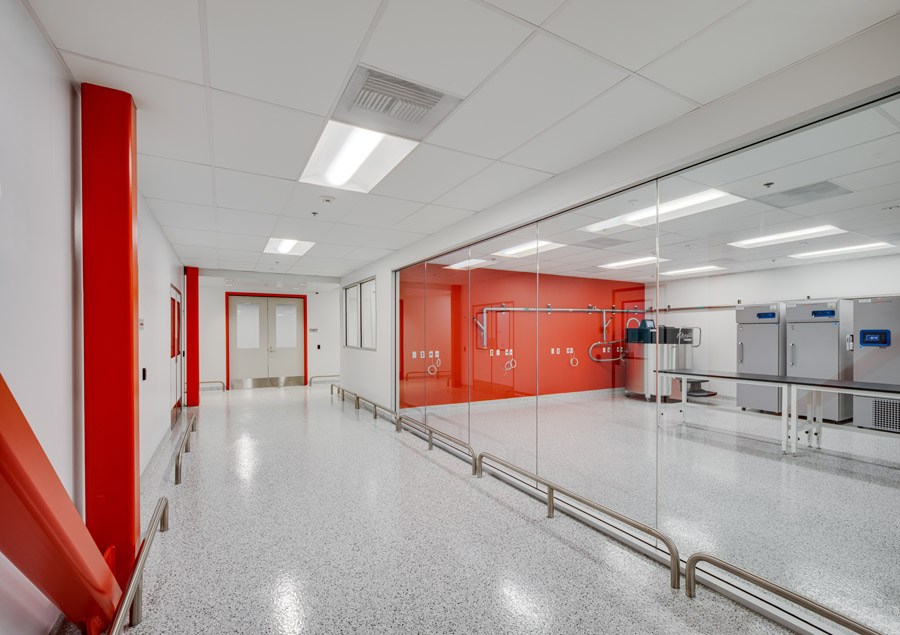 The design-build delivery method was crucial for overcoming the many permitting challenges that could have affected end dates. The team completed design, permitting and construction in 18 months during the COVID-19 pandemic and with partners located across the country. The design-build arrangement kept all subcontracts under one entity, which proved a timesaver when the team realized that the project had to be broken up into three permitting phases –interior, exterior, and superstructure required to support the cleanrooms.

To meet the dates, the team met with the City of Arcadia to explain the importance of approving just-in-time permits to release the different phases as early as possible. Although the City was unfamiliar with the mechanics of a design-build contract or phased permitting, the project team worked with them to push through an accelerated permitting package, separating the underground and structural work from the TI to release those trades sooner. Ultimately, getting the different phases released as early as possible ensured the end dates were met. 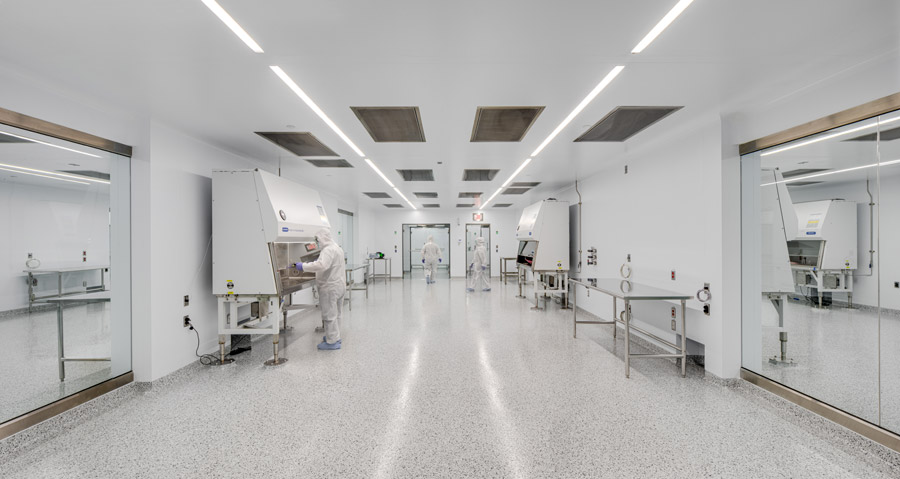 Virtual co-location of the team during the facility’s design was also a challenge during the pandemic. The team used virtual communication tools like Smartsheet and Bluebeam to track progress towards design milestones and to host live, virtual page-turns and share comments and questions.

BIM also proved essential, as it was employed from the beginning of design to substantial completion.

With weekly BIM meetings facilitating an iterative design process, the team had flexibility to assess multiple design options against cost, time and quality. The early onboarding of overhead mechanical, electrical and plumbing subcontractors gave the team a platform to coordinate, and create a detailed plan to guarantee that all trades had appropriate access to stage their equipment before and after the walkable ceiling was placed.

BIM information was exchanged and maintained in one location, including models, estimates and design notes. By the time the team received the permit packages, the model was nearly clash-free. To keep the project on schedule, the team utilized “Dusty,” a robotic field printer programmed with CAD files for floor and wall layouts. The technology reduced errors, removed ambiguity from any work done by hand, and only required two people to monitor its progress.