A Reflection of Nature for Natural Resource Stewards

The California Natural Resources Agency carries a broad responsibility to restore, protect and manage the state’s natural, historical and cultural resources. That commitment to sustainability is reflected in the agency’s new headquarters.

The proposal for the structure called for an 850,000-sq-ft, 22-story high-rise office tower embracing the mission of protecting and restoring the state’s natural habitats, both in form and function. A design-build team led by Turner Construction Co. and AC Martin Partners brought that “very lofty vision” to the competition for the project, says Richard Standiford, a project director III for the state’s Dept. of General Services.

“All the ideas came to fruition,” Standiford says. “They exceeded expectations.” 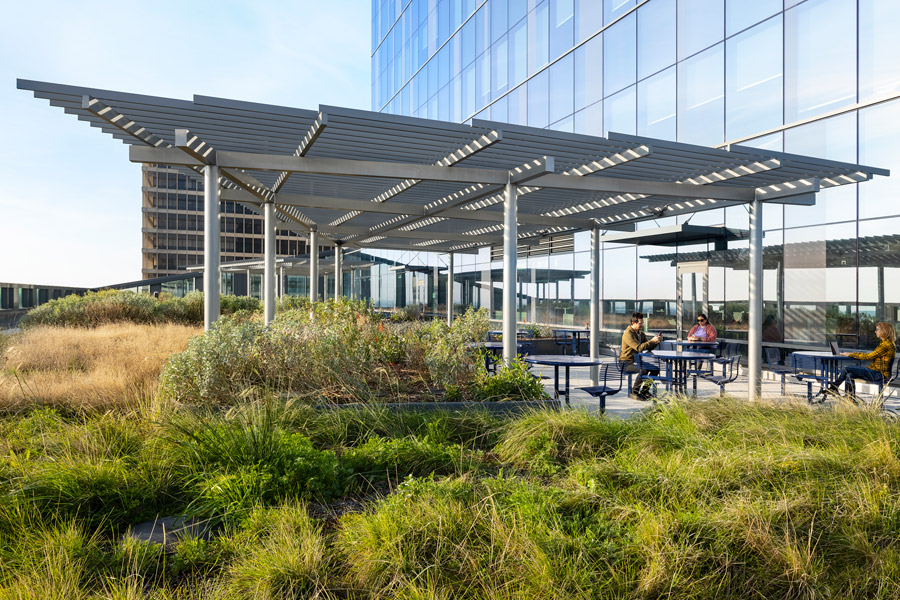 A rooftop terrace is adorned with native landscaping.
Photo by Lawrence Anderson

To pull it off, the team used a “big room” collaboration with the various team members, say Dan Wheeler, Turner regional vice president and general manager, and Jim Hull, Turner project executive. The strategy hastened what Hull says they called “decision velocity” and created transparency between members of the project team and the owners.

The big room included Turner’s professionals on the project as well as trade and MEP partners, key decision makers from AC Martin, Dept. of General Services officials, staff from department construction manager AECOM, the inspection team and others. At one point, there were 110 people working out of the big room, Wheeler says. Whenever an issue came up, everyone who was needed to solve the problem was in the same space, enabling them to find a solution without calling outside bosses for permission. 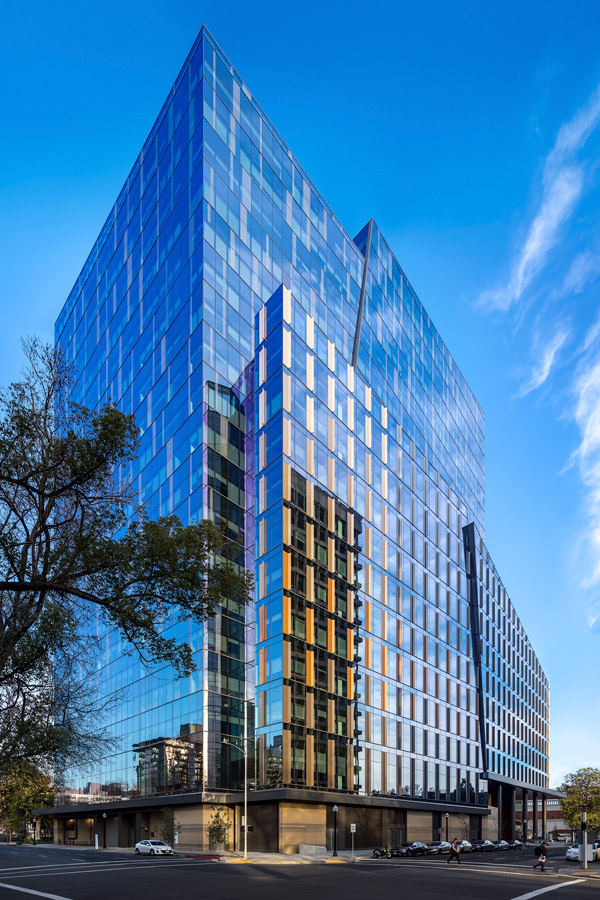 The 850,000-sq-ft, 22-story high-rise office tower met its sustainability goals through the use of reclaimed wood and local/renewable materials.
Photo by Lawrence Anderson

“We built a flat organization structure where we could just solve all issues in the big room,” Wheeler says.

The big room started at Turner’s office during the five-month competition for the contract. Wheeler says that’s where they invited the owner’s team for proprietary meetings about the team’s plan—rather than using a hotel conference room or other space—so officials could see their collaboration firsthand. After the Turner-AC Martin team was selected, they moved the big room into a 24,000-sq-ft office space across the street from the property.

“We saw this project as an opportunity to really make a statement with the Sacramento skyline,” Hull says.

Turner and AC Martin have a long history together, and Hull says the design firm was Turner’s partner of choice for this project. Before winning the project, they had recently completed the Wilshire Grand Center in Los Angeles, which is the tallest building west of the Mississippi River.

“We tend to finish each other’s sentences when it comes to design-build,” Wheeler says. 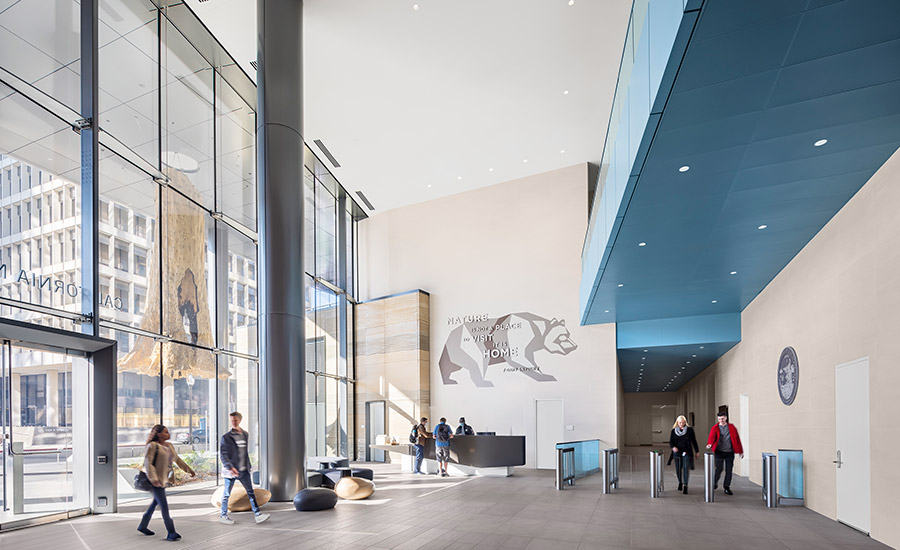 The lobby is designed to honor the mission of the Natural Resources Agency: “To restore, protect and manage the state’s natural, historical and cultural resources.”
Photo by Lawrence Anderson

Focus on the Users

AC Martin’s designers worked to maximize efficiency for the state government office building, but they also wanted to connect both mentally and literally with the people who would be using it, says Tammy Jow, a studio principal at AC Martin who was the firm’s project director and facade leader on the project.

“Our design was really about the California Natural Resources Agency,” Jow says. “It included a lot of gestures and metaphors to nature.”

Those design elements include a V-shape on the north elevation of the building mimicking a fissure in a rock formation, a gorge design running through the main lobby and a light fixture inspired by the topography of Mount Shasta. An accent wall features reclaimed wood salvaged from the 2018 Camp Fire in Paradise, Calif. The team hired a small business to mill the wood into usable material, and a member of the design team handpicked the pieces to use and numbered them so the carpenters knew the order for installing them on the wall.

“We saw this project as an opportunity to really make a statement with the Sacramento skyline.”
—Jim Hull, Project Executive, Turner Construction Co.

The first floor, auditorium and exterior retail spaces are clad with rammed earth panels made with local material by Napa-based fabricator Rammed Earth Works. They appear precast but were actually handmade, with different colors of material simulating the gradient lines in rock and soil. Rammed Earth Works had primarily made accent pieces for residential and interior projects before this project, Hull says. This was the manufacturer’s largest commission. The project team helped the fabricator relocate to a larger site in Redding to accommodate the larger project.

They also worked with the fabricator to figure out how to manufacture the larger panels, which varied in size from about 8 ft by 8 ft to 8 ft by 12 ft and how to transport them and attach them to the building. They ultimately settled on precast steel frames to protect them in transit and mount them onto the building, Hull says.

In the auditorium, ceiling baffles were inspired by the rings of a tree. Turner hired a local woodworker, Elite Wood Design, to craft them, but with the wood ribbons curving in both direction and being elevated, it was challenging to fabricate them. AC Martin staff assisted with the design, flattening it out into 2D rationalized patterns for the subcontractor. Then the team used the big room to assemble full-size mock-ups before the finger-jointed sections were interlocked in place.

But the building couldn’t just look good. It needed to highlight sustainability. Standiford says it is one of the first net-zero energy buildings the Dept. of General Services has built. The building is connected to the department’s central utility plant, which is kitty-corner to the site. It receives 100% renewable electricity from SMUD’s SolarShares program. Features like low-flow plumbing fixtures and a greywater reuse system are estimated to save about 3.5 million gallons of water annually. Jow says the site includes 260 bike racks and 27 showers to promote commuting by bicycle. More than 18% of construction materials used have sustainable attributes, such as being recycled, and 80% of construction waste from the site—4,924 tons—was diverted from landfills. The U.S. Green Building Council confirmed the building’s LEED Platinum certification in April. 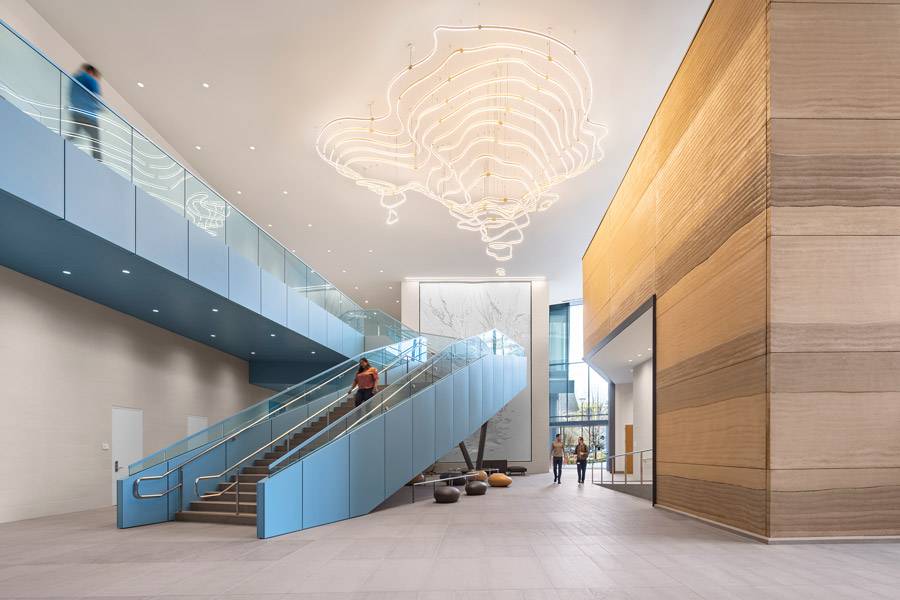 The project did face challenges, and the the turmoil resulting from the COVID-19 pandemic was one of the largest. Since work on the project was deemed essential by the state, construction was allowed to continue. The team abided by statewide health restrictions, Hull says, and they used stringent protocols to prevent the virus from spreading through the workforce.

Wildfires forced work stoppages as smoke severely impacted air and there were political protests at the nearby state Capitol that required drawing up plans to evacuate the site if necessary.

Another challenge was handling the restoration of the historic Heilbron House located on the site. The structure was built in 1881 and proved to have much greater dry rot and damage than expected. Sacramento-based Seegert Construction, a small, disabled-veteran business enterprise, headed that portion of the project.

“Anytime you get into historic restoration like that, you know it’s going to be a ton of work, coordination and time,” says company owner Steven Seegert. “You get away from current conventional construction methods and go back to what people did 100 years ago. You’re talking about a lot more detail, a lot more time-intensive labor methods, etc.”

Seegert Construction, which specializes in preengineered steel structures, also worked on the tower’s first-floor food services build-out and the construction of a day care facility on top of an office building across the street—where the project big room was located—using prefab modular “pods.” They had to install steel beams to transfer loads to existing structural columns. They then picked the large pods onto the roof using a 300-ton crane, Seegert says. “We were right at the limits of what we could do,” he says.

A phased move-in began seven weeks ahead of the scheduled completion date, and the building received an unconditional certificate of occupancy on the same day the team was scheduled to complete the project. Mike Meredith, capital outlay program manager for Dept. of General Services, says the building has already proven to be community-friendly, and the occupants are happy with it. Members of the project team also highlighted that Gov. Gavin Newsom has used the auditorium for several press conferences and speeches, including his state of the state addresses.

“I take that as a huge compliment,” Hull says. “It is a fabulous facility. It changed the skyline of Sacramento.”

Standiford called the building “a once-in-a-career” project. But even more than the building, he admires the relationships the team formed.

“Projects come, projects go,” he says. “There will be the next neat project coming down the road. But the team, the culture, the relationships built with that team is something that is going to be very hard to replicate.”

Back to ENR California Best Projects 2022