PCL recently completed work on a new vacuum pressure swing adsorption system at the 143-million-gallon-per-day Central District Wastewater treatment plant in Miami. The system is a first for the Miami-Dade Water and Sewer system and replaces a cryogenic oxygen system. According to PCL, the newer technology reduces plant power consumption while generating the same amount of oxygen, allowing the facility to produce pure oxygen more efficiently and cost-effectively and assisting Miami-Dade County in meeting new environmental guidelines set by the U.S. Environmental Protection Agency and the Florida Dept. of Environmental Protection. Because the original treatment plant was not built to accommodate expansion, the construction team relocated existing electrical duct banks to free up the footprint for the new facility. PCL’s scope of work included electrical, instrumentation and controls; site and civil work; process mechanical; architectural; structural; plumbing; HVAC; and fire protection, according to the company.

Garney is design-builder for the $262-million upgrade and expansion of the Hampton Roads Sanitation District’s existing Nansemond wastewater treatment plant. The work will improve nutrient reduction and increase plant capacity from 37 million gallons per day to 50 MGD. The project is part of the district’s Sustainable Water Initiative for Tomorrow program to improve water quality within the Chesapeake Bay. Plant construction is set to begin in early 2023 and finish by December 2025. Garney is also design-builder for Section 1 of the program’s transmission sewer force mains, including over four miles of large diameter piping. The marine section of the force main is a critical link in this new system. The pipe will be installed subaqueously under the navigation channel and along the bed of the James River. Construction of the pipelines runs from April 2022 through June 2025.

In May, Walsh Construction broke ground on a new $164-million digested sludge dewatering facility at the San José-Santa Clara regional wastewater treatment plant, which has a capacity of 100 million gallons per day. The project will free up 750 acres of land currently being used for open-air drying beds and lagoons for other uses and help the plant reduce odors and comply with new organic waste regulations, the company says. Black & Veatch is providing the design on the project. 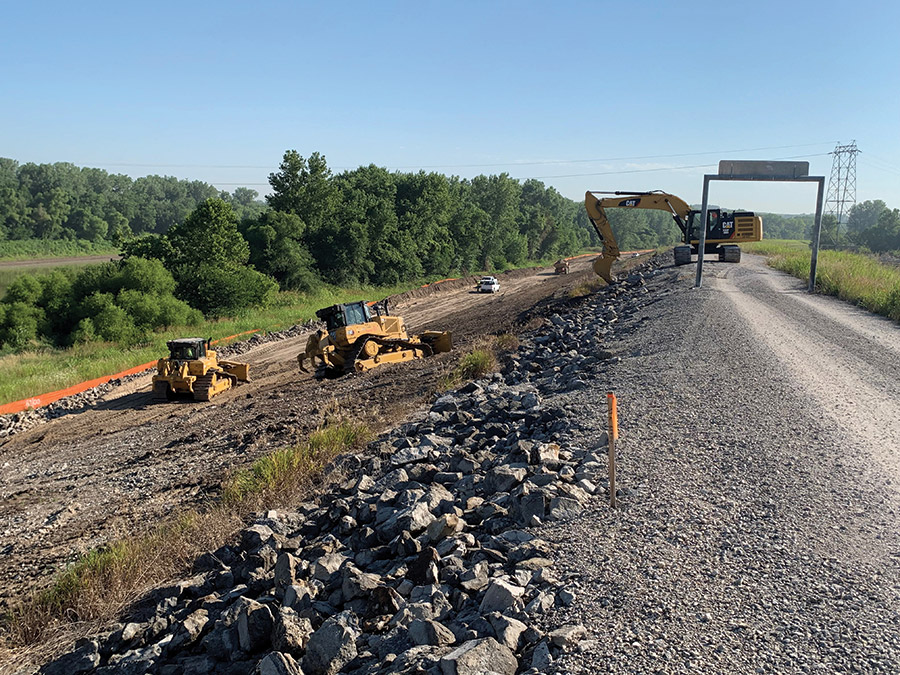 Lane Construction is in the early stages of a $258-million flood control project for the U.S. Army Corps of Engineers in the Kansas City, Mo., metropolitan area. The project aims to reduce the risk of a levee breach and overtopping during future flooding. Lane’s contract includes raising existing levees and floodwalls by an average of 4 ft and replacing and modifying existing levees and floodwalls. Also included are new sections of levees and floodwalls and railyard flood gate closure structures along the Kansas River. The project, expected to complete in 2026, is part of a group of Corps projects collectively known as the Kansas City Levees project. It includes 60 miles of levees and floodwalls along both banks of the Missouri and Kansas rivers, involving a projected 7,000 structures and $22 billion in capital investment estimated over 15 years.

Scaling Up: The Push Is On to Expand and Equip the Global Clean Energy Workforce