The U.S. Nuclear Regulatory Commission and Interim Storage Partners, a joint venture that gained a federal license last year to build an interim storage facility for spent commercial nuclear fuel at a Texas site, have until Aug. 3 to answer a federal lawsuit claim by state officials that a new U.S. Supreme Court decision eliminates the federal agency’s licensing authority.

The state challenge now is before the U.S. appellate court in New Orleans.

NRC issued a license to the JV team of Waste Control Specialists and Orano USA to store for 40 years up to 5,000 metric tons of spent nuclear power plant fuel and 231 metric tons of low-level radioactive waste at the proposed site northwest of Midland, near the New Mexico border.

The proposed facility is estimated to cost $350 million to build, with total expenses nearing $2.3 billion by the end of its 40-year lifespan, says an NRC final environmental review issued in July 2021.

Interim Storage Partners said it could also enlarge the site to hold 40,000 metric tons of spent fuel, but NRC said that would require a license amendment with added review. 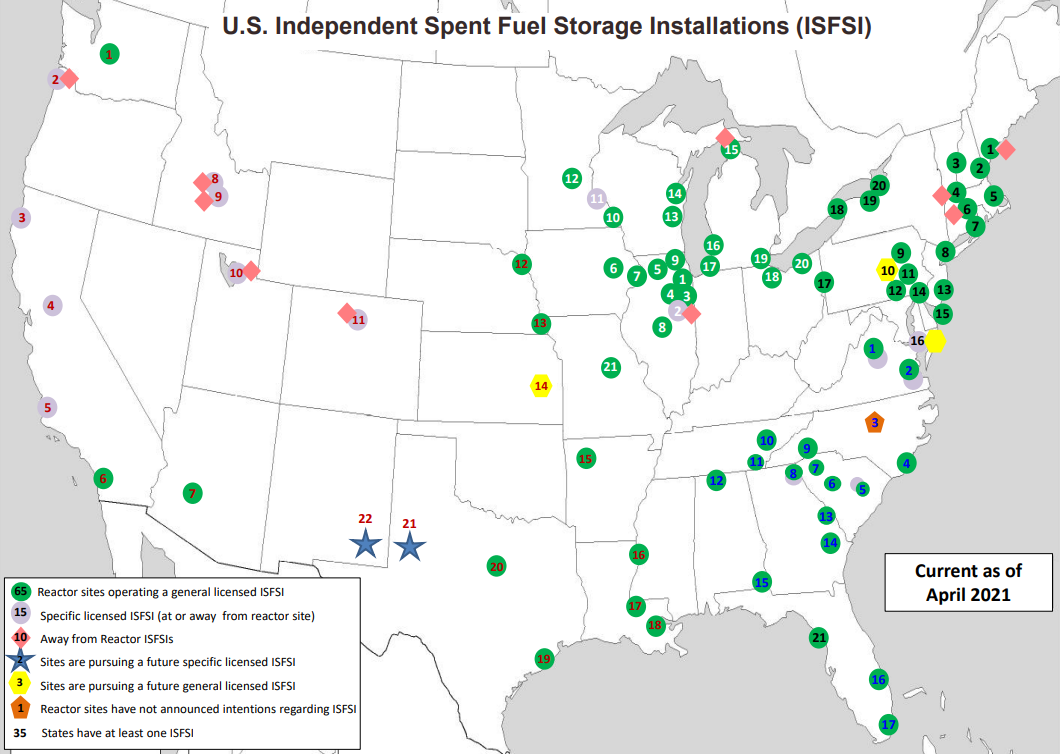 The facility would be located adjacent to a separately operated existing low-level nuclear materials disposal facility in Andrews County, Texas, with other locations in the state now storing spent fuel from two nuclear power plants.

While NRC bases its authority on the 1954 Atomic Energy Act to license waste storage at a private site without a state’s consent, the law does not specifically refer to the storage or disposal of spent nuclear fuel, Texas claims. Following state enactment of a new law last year that bans interim commercial waste storage, Texas wants the federal court to vacate the Interim Storage Partners site license.

That NRC was not given explicit authority by Congress raises issues under the “major questions doctrine,” Texas Assistant Solicitor General Michael Abrams said in a July 6 letter to the court.

The Supreme Court said that the doctrine applies when Congress has consistently rejected proposals to amend the law to give an agency an authority. Texas argues that Congress has considered multiple bills to explicitly authorize the U.S. Energy Dept. to contract with privately owned spent fuel storage facilities but none are enacted.

“Difficult and even intractable problems do not give an agency a blue pencil to rewrite its governing statute,” said the state. Texas accused the federal government of committing a “massive breach” of its obligation to provide permanent storage for spent nuclear fuel at Yucca Mountain in Nevada, a now mothballed project.

The suit is playing out as new legislation floated by Sen. Joe Manchin, (D-W. Va.), would create a new federal agency separate from DOE to find a community willing to house a new permanent site. It would also authorize that agency to operate one or more federally-owned interim storage sites and one or more with a private partner. The bill is set for a hearing July 28 in the Energy and Natural Resources Committee, which he chairs.

NRC, Interim Storage Partners and the U.S. Justice Dept asked the court to allow case participants to file new briefs on the issues, due Aug. 3, with oral arguments set for the week of Aug. 29.

Meanwhile, New Mexico also is challenging NRC in U.S. appellate court in Denver over plans to site an interim storage facility in that state proposed by Holtec International.

The agency on July 13 issued the final environmental impact review for the first $230-million project phase, with agency staff recommending that the facility license be issued.

The site would initially store about 8,680 metric tons of spent nuclear fuel in 500 canisters. The agency review also considered the environmental effects of an expanded site holding 10,000 canisters. The project, if fully built, would cover 1,000 acres in southeastern New Mexico and cost up to $2.4 billion

The agency expects to decide in January whether to issue the license.

In a statement, Holtec said that the final NRC review “confirms that there are no adverse impacts to other enterprises in the area including oil and gas, ranching and farming.”

It added that “the completely welded and hermetically closed canisters that will be safely stored at the facility are designed, qualified and tested to maintain their integrity and prevent the release of radioactive material under the most adverse accident scenarios postulated by NRC regulations for both storage and transportation.”

The statement also includes comments from local officials that support building the facility.

Gov. Michelle Lujan Grisham said, in a statement, that “while NRC and Holtec International say that the proposal is ‘temporary,’ a 40-year license with the opportunity for renewal will threaten the health and safety of generations of New Mexicans.”

However, the New Mexico legislature this year did not pass a bill that would have prevented state regulators from issuing Holtec permits for industrial wastewater and construction work at the site..

While Energy Secretary Jennifer Granholm has said the U.S. Energy Dept. is making progress to obtain interest from U.S. communities to locate interim private storage sites for spent nuclear fuel, bills also are pending in the U.S. Congress to block use of federal funds to support activity at such sites.