This website requires certain cookies to work and uses other cookies to help you have the best experience. By visiting this website, certain cookies have already been set, which you may delete and block. By closing this message or continuing to use our site, you agree to the use of cookies. Visit our updated privacy and cookie policy to learn more.
Home » Design-Build Helps Accelerate New Orleans Sound Stage Project
Texas & Louisiana Construction ProjectsTexas & Louisiana
Digging Deeper | Renovation

Construction will wrap at the end of September on a $35-million renovation and expansion of Second Line Stages, a film and TV production facility in the heart of New Orleans, and those involved say effective communication and collaboration played an important role in the speed of this design-build project.

Second Line Stages is located on Richard Street in the Garden District area of New Orleans, surrounded by a variety of businesses and restaurants, and the facility sits a few blocks from the Mississippi River. This project includes a renovation of its existing building on Richard Street and an expansion and renovation of an old warehouse on adjacent Market Street, which used to house Mardi Gras floats.

“This is one of the bigger sound stages in Louisiana,” says Nick Moldaner, chief operating officer for Impetus, the construction firm responsible for the design and build of the project. “What’s unique about this is the location. It’s an urban setting. And having this in New Orleans, it offers the opportunity to not have to drive as far for site selection.”

Construction in a city often presents difficulties, says Sasha Vinitsky, principal for Atlanta-based architectural firm, Atlas Collaborative, a partner in the project. However, in New Orleans – a city that sits below sea level and is prone to flooding – the challenges were especially unique.

“We are landlocked by the fabric of the road. It cannot be changed. Roadwork cannot be changed. So, we have to work within the existing format of the roads,” Vinitsky says. “And New Orleans has no good soil, no good delta, so we had to explore with our construction engineers how to build a slab that was unique to New Orleans and its geographic area to be able to shore these 56-foot-tall panels on the site.”

The renovation of the existing building that used to house Mardi Gras floats presented its own set of challenges, Vinitsky says. 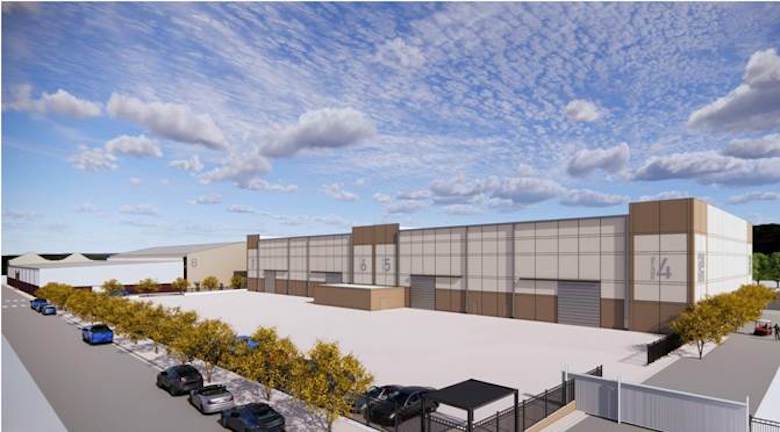 Construction on those buildings includes 101,385 sq ft of renovated space, converging a metal roof to an insulated TPO roof, metal wall panel restoration, a new exterior paint scheme, new overhead doors, and new site paving. Inside the building, 30,000 sq ft of space was converted into stage with an adjacent storage space of 3,500 sq ft, along with two separate mill spaces at 30,000 sq ft and 35,000 sq ft. There were also 40-foot sound walls installed, 27,500 sq ft of acoustical insulation applied over the inside face of the center warehouse walls and 30,000 sq ft of spray applied insulation on the underside of the roof deck. Additionally, crews installed new electric service in two different voltages for house power and shoot power, as well as new HVAC services.

Renovation of the existing building on Richard Street includes 60,000 sq ft of new sound stages. It also includes the installation of four elephant doors, two new acoustical rated accordion partitions to subdivide each 30,000 sq ft sound stage in half – creating two 15,000-sq-ft sound stages. The renovation also created new electrical service, including 9,000 kVA of transformation and 3,200 amps of shoot power at each stage for a total of 12,800 amps. Impetus also designed and installed a storm water retention system that includes about 12,700 cu ft of retainage.

The project also included a total of 738 tons of steel with 150 precast panels and pieces, including columns, being erected at the site with a specialty crane. The steel superstructure took less than 10 weeks to complete.“It was a delicate dance of speed and efficiency to make sure it went the way it did,” Moldaner says. “And we were able to erect the building in about 10 weeks.”

The Richard Street renovation also included 10 steel 56-foot-high trusses to create the frame of the roof and three steel pieces for each span, which includes 30 pieces total. These pieces were bolted together and lifted into place with a 250 T Crawler Crane and shored into place. Because there was a lot of heavy construction, infrastructure had to be created to make sure the crane could operate. Impetus built a temporary road on the site to allow the crane to safely move around, Moldaner says.

Because of COVID-related supply issues, specifically with steel and transportation, Vinitsky and Moldaner say the construction process was completed in parallel instead of linearly.

“We identified a lot of the challenges early on, knowing that speed was key,” says Moldaner. “From a design standpoint, we were acutely aware of onboarding with our trade partners. This was an intense high-level of coordination and we could not move at this pace unless everyone was willing to do so.” 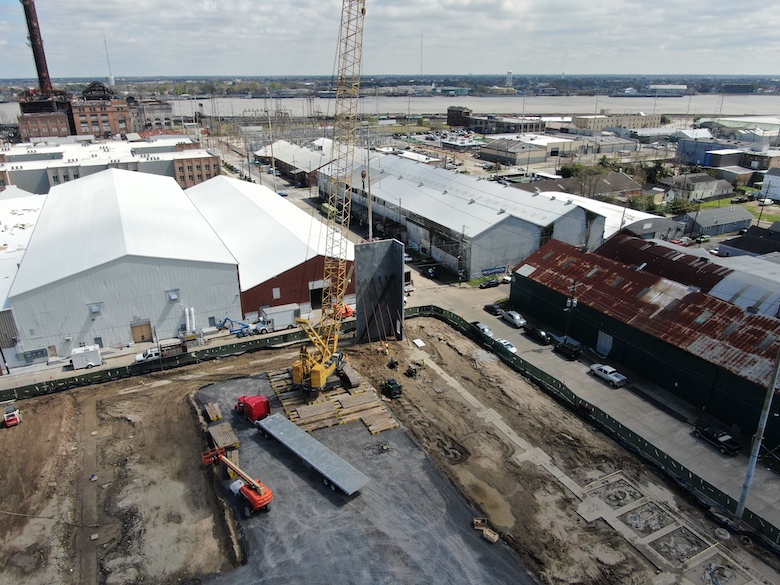 The project also included a total of 738 tons of steel with 150 precast panels and pieces, including columns, being erected at the site with a specialty crane.
Photo courtesy of Impetus

According to Impetus, the steel trusses were released for shop drawings and procurement in October 2021 to ensure they were on site for a March 16 start date. Impetus was still finishing the architectural and site designs while the structure was being procured. The trusses were shipped in one day on trucks from North Alabama Fabricating Co. in Birmingham to New Orleans.

Owen Parrish, vice president of operations for NAFCO, says while finding truckers to ship the trusses was a challenge related to COVID and trucking shortages, communication and in-house services helped expedite the process.

“We are one of a handful of fabricators that do the detailing in house, so we detailed this ourselves and were constantly talking, both internally and externally, communicating constantly with the Impetus team to stay on top of issues,” Parrish says. “The easy part ended up being the fabrication and shipping. This was a well-organized project. The team was on the same page and communicated well. It was very effective.”

Second Line Stages is the operator of the Hackman Capital Partners owned production studios in New Orleans. Trey Burvant, co-founder and vice president of studio operations at Second Line Stages declined to comment for this story. However, in an April 9 article, published in NOLA.com, where he was quoted during an April 7 University of New Orleans real estate conference, he spoke about the thriving movie industry.

“In New Orleans, the demand for content creation right now is off the charts,” he said, according to NOLA.com.

According to its website, Second Line Stages film studios has had more than 50 Film, TV and Commercial Clients since 2009. Its movie and TV productions include, “Treme,” “Killing Them Softly,” “Django Unchained,” “Now You See me,” “Looper,” “21 Jump Street” and “Bad Moms.”

The project’s renovation and expansion increased the size of Second Line Stages to three city blocks. Crews have recorded a total of 26,122 worker hours as of June 14, according to Impetus.

When this project is complete, 250 people will have worked on this job, Moldaner says. “This is a wonderful example of a design-build gone well. It does require a lot of collaboration and the right mindset. But this is a great example of a team that has been able to figure it all out.”