While the renovation of a 167-year-old historic courthouse in the heart of uptown New Orleans is nearly complete, the journey to revive the building into a common area for a Senior Living Complex has been a challenge.

The Carrollton Courthouse on Carrollton Avenue was designed in 1855 by Henry Howard, a well-known New Orleans architect who designed nearly 300 buildings in the city throughout his lifetime. The Greek Revival architectural style building has its own history lesson. The structure originated as a courthouse for Jefferson Parish and was built alongside a new jail before it was annexed by the city. For decades, the two-story building, with its 18-ft ceilings, housed different schools, until roughly 10 years ago. Since then, it has sat vacant and dormant. 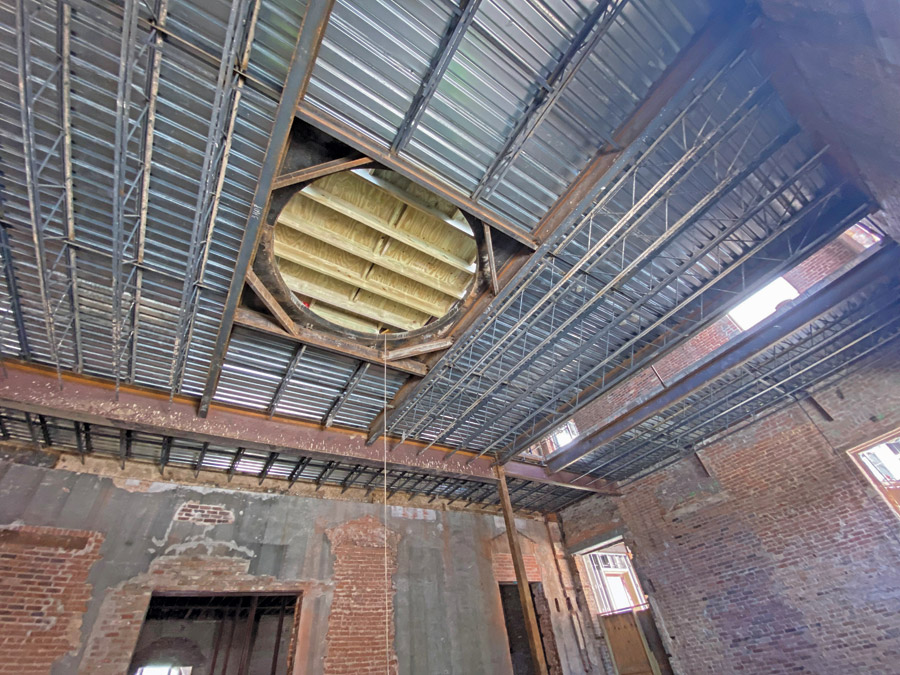 One of the building’s new light wells with structural steel framing and covered protection along the brick and plaster walls.
Photo courtesy of Impetus

About four years ago, Felicity Property Co., a local developer, purchased the property at a public auction with the goal of developing the courthouse and its adjacent property into an assisted living and memory care facility. With the help of New Orleans-based Impetus Construction and Waggonner & Ball architectural firm, the developer began the 18-month process of designing, renovating, and building the project, slated to be complete in early November. Liberty Healthcare of Wilmington, N.C., will run the senior housing facility.

The former courthouse is the centerpiece of the $28.5-million project and will serve as a social space for the residents. It will include a lobby, sitting and entertainment areas, a formal dining room, a cocktail bar, gallery spaces and public toilet rooms. The building is flanked by two wings of new construction, which sit on the north and south sides. These wings will accommodate assisted living and memory care units, administrative offices, a kitchen and various support structures, says David Curtis, project architect for Waggonner & Ball. The renovated space will also include a skylight and a light wall to bring in natural light.

“Almost every part of this building had to be touched,” says Patrick Schindler, president of New Orleans-based Felicity Property Co. “There were significant repairs that had to happen.” 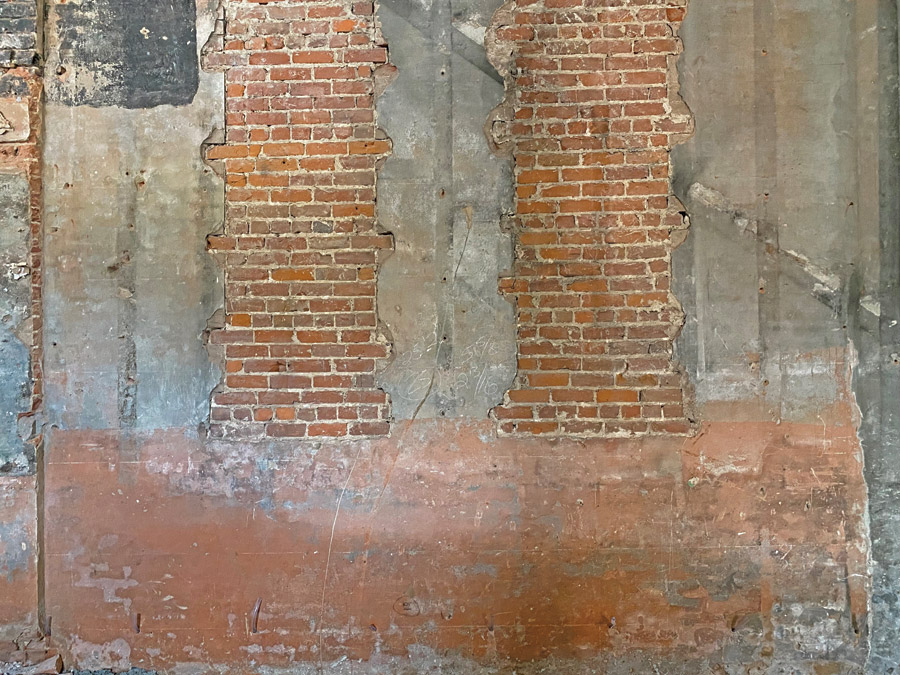 A look at the existing brick and plaster walls of the historical Carrollton Courthouse—a 167-year-old, two-story building on Carrollton Street in New Orleans—prior to the start of the building’s initial renovation into an assisted senior living facility.
Photo courtesy of Impetus

The structure sat vacant for so long that the heat and humidity of New Orleans took a toll on the interior. Because of those conditions and the remediation work required, the budget was increased by about $1 million, Curtis says.

“It was designed by Henry Howard, who was a very prolific architect around that time, so this building was never considered being torn down,” says Curtis. “We had a lot of respect for this historic building. Nevertheless, it has been abused over the years through its use and transformation. So, we were not setting out to restore it to its original condition, but to renovate it and make it whole. There is not much in the building that is original.”

Inside, there was rotted, termite-eaten wood, including a truss that was collapsing, and lots of vandalization due to squatters and various animals. Wire had been stripped; it needed new air conditioning, electrical units, plumbing and windows. In addition, the brick above the windows was damaged when the windows were demolished. More than 60 lintels at existing windows and doorways were installed to resolve those issues. 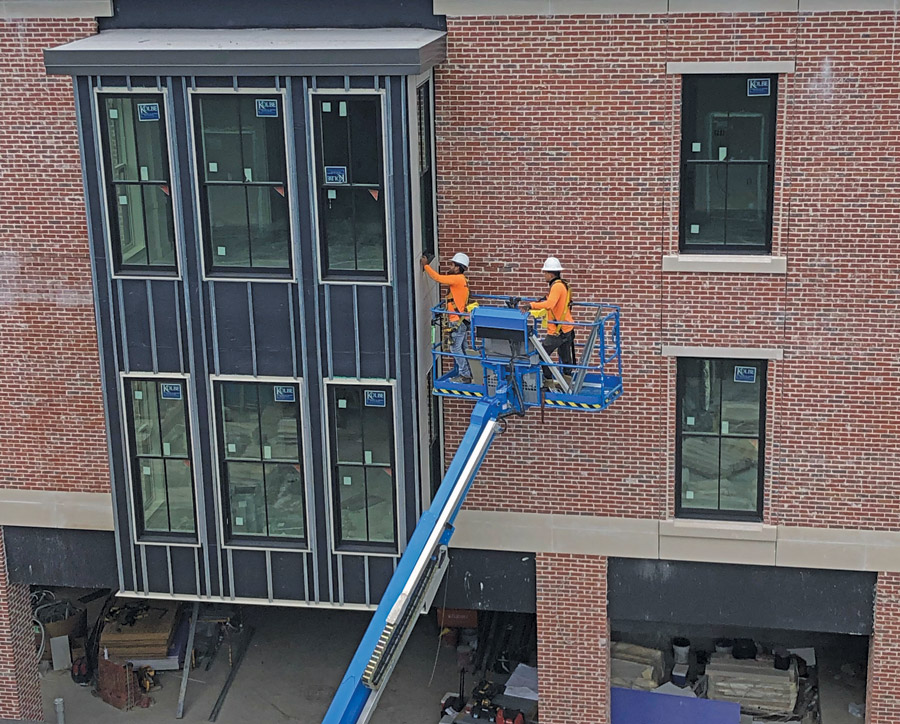 “There was a lot of acoustical ceiling tiles on the ground,” says Alex Stuart, project manager for Impetus, the contractor on the project. “It was like stepping in wet sand when you stepped on them. It was really run down. No one had been there for years on end.”

There were also issues with the building height. The historic two-story building was constructed with large planks of wood back in the 1800s. In those days, those planks created massive ceiling heights, 18 ft from the first floor to the second floor. Crews had to align the construction of the new three-story wings to try to match the current height of the historical building. However, because of height limitations, lumber costs and budget constraints, the project couldn’t afford to go 18 ft floor-to-floor in the new wings, Curtis says.

“It was tough to store materials on site because of the size of the site, so we would use other project sites for storage and then truck it over when needed.”
—Brad Shannon, Market Leader, Impetus

Crews used connectors and built ramps from one building to another to help with the flow. This design feature will also be practical for residents, many of whom are in wheelchairs, Schindler says.

Construction on the project began in May 2020. Contractors have utilized drones and 360° cameras to document work completed on the site. The project is located on nearly 76,000 sq ft of land between Hampson and Maple streets. Once complete, the project will include 88,000 sq ft of living units, amenities, common areas and parking. The parking is hidden under the new wings by masonry exterior walls to keep the integrity and rhythm of the walls and openings above, Curtis says.

The front lawn and two courtyards will be developed into formal gardens for the residents, and will also function as stormwater storage for the entire city block because of new guidelines outlined by the city through Waggonner & Ball’s Greater New Orleans Urban Water Plan. There will be seven permanent retention ponds on site. 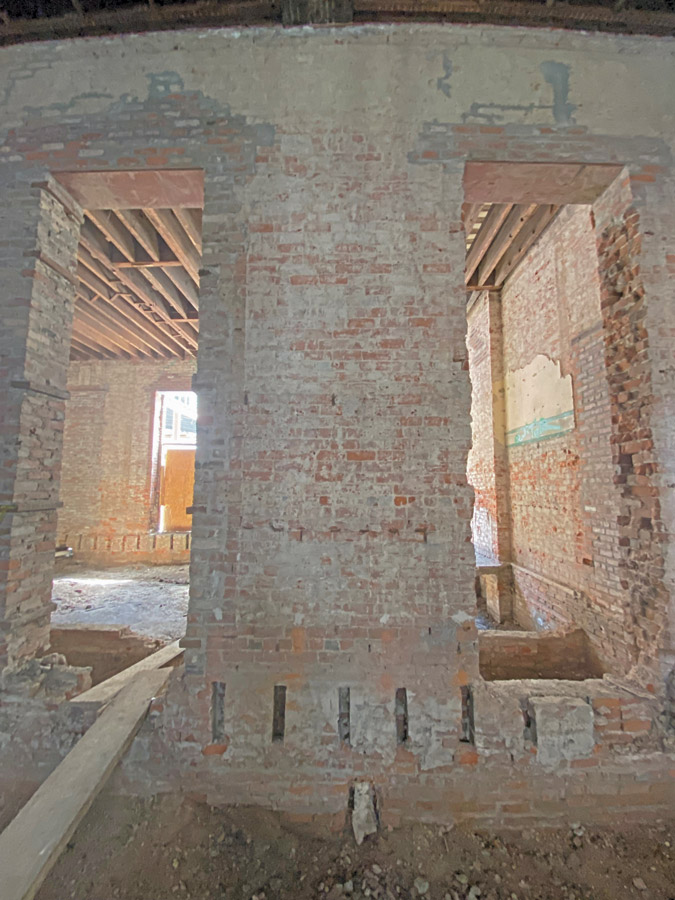 Building openings with lintels above and removed floor joists below. More than 60 lintels at existing windows and doorways were installed throughout the building.
Photo courtesy of Impetus

There is a total of 93 units: 48 studios and 45 one-bedroom units. However, there is space to combine studio and one-bedroom units to form two-bedroom units. While it was difficult to find quality subcontractors, which continues to be a national issue, this project has generated nearly 200 construction jobs, says Brad Shannon, market leader for Impetus. Once complete, it will produce between 60 and 80 permanent jobs, Schindler says.

“This is a health care operation,” Schindler says. “We will have 93 residents and add the caregiving and service providers, the hospitality component, management positions, activities director and facilities team, there’s going to be a lot of employment opportunities here.” 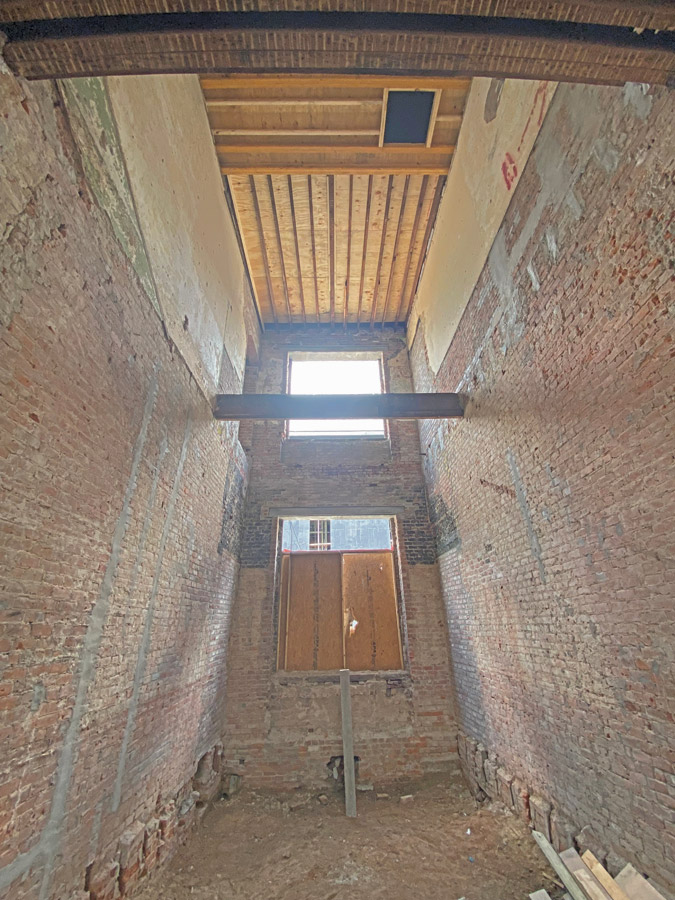 The floor joists were removed to make way for a new first floor slab.
Photo courtesy of Impetus

The two, three-story L-shaped wings are covered in brick, with an off-white lime wash to showcase the original stucco finish of the historic courthouse. The wings are attached to the courthouse by narrow connectors that contrast in color with the courthouse and wings, to separate the old from the new, Curtis says.

Because the project included a renovation of a historic building and construction of two new structures, the timeline differed from other traditional builds, says Shannon.

“There was lots of planning, and we did have some early release of material,” Shannon says. “We had to move around the site with some space constraints. It was tough to store materials on site because of the size of the site so we would use other project sites for storage and then truck it over when needed.”

While procuring construction materials for the new build was a challenge because of supply, trucking and workforce issues from COVID-19, project owners and contractors say the renovation of the historical structure was the biggest challenge of all. It is essentially a project within a project, with the phases of work utilizing different timelines between the courthouse and the new wings.

As it nears completion, Schindler says he is excited to see the end result of this project and its overall impact on the neighborhood.

“We have always been sensitive to the needs of the community. We want to be good neighbors and blend well into the fabric of the neighborhood,” he says. “And we feel like we have done that. In a lot of ways this neighborhood was built around this structure, and this was a building that the neighbors saw as a beacon to their neighborhood.”