This website requires certain cookies to work and uses other cookies to help you have the best experience. By visiting this website, certain cookies have already been set, which you may delete and block. By closing this message or continuing to use our site, you agree to the use of cookies. Visit our updated privacy and cookie policy to learn more.
Home » Fickle Mississippi River Directs Water Transit Job
Texas-LouisianaTexas & Louisiana Construction Projects
Digging Deeper | Transit

The New Orleans Regional Transit Authority’s $25-million Canal Street Ferry Terminal is slated for completion by the end of the year, and everyone involved agrees that the mighty Mississippi River was this project’s most important manager.

“The river is going to throw any curveballs it wants at you,” says Rachel Kenney, project manager and chief engineer for the Metairie, La.-based Infinity Engineering Consultants, one of the project’s architects. “The river is very unpredictable, and you have to be ready to spring into action when the river level permits construction to happen.”

Plans for the Canal Street Ferry Terminal project started in 2015. It went out to bid twice but was never awarded because of budgeting issues. In early 2020 it was approved, and it broke ground later that year. The project includes a 4,300-sq-ft terminal building, a replacement barge with a modernized boarding structure, a 13,200-sq-ft elevated wharf and two new ferries. The former terminal and surrounding structures were designed in the 1960s and originally intended for cars. 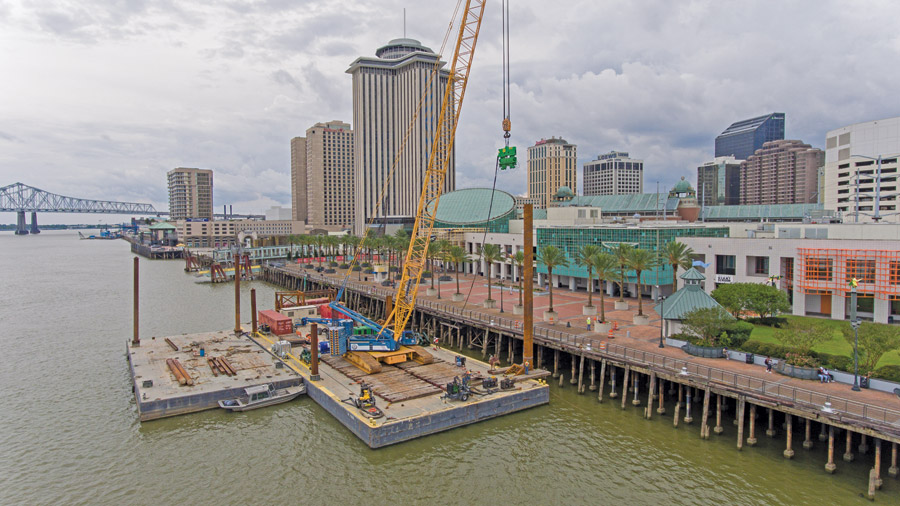 Installing 42-in. by 120-ft pipe pile with a vibratory hammer for the temporary ferry berthing. Since crews had to drive pilings into the riverbed before the spring rising of the river, APC employees worked five weeks of overtime, seven days per week from mid-January through mid-February.
Photos by Joel McLain/APC

“When tolls went away, cars went away,” says Lona Hankins, deputy CEO of planning and infrastructure for the RTA. “It became a pedestrian ferry. And we needed to retrofit the whole landing to reservice the new ferry boats.”

The initial design for the new project included an amoeba-shaped roof that made more of a statement and increased the overall budget. With a few design tweaks, the project was pared down, and the shape of the building was adapted to a more pragmatic space for ferry riders.

Similar to an airport terminal, the building will include security cameras, real-time information, digital advertisements and charging stations.

The CMAR project is about 45% complete and is slated to be finished by December, Hankins says.

There were scheduled ferry service interruptions during construction, and the ferry was closed for three weeks. However, the public was notified and there were no unanticipated delays, officials say. 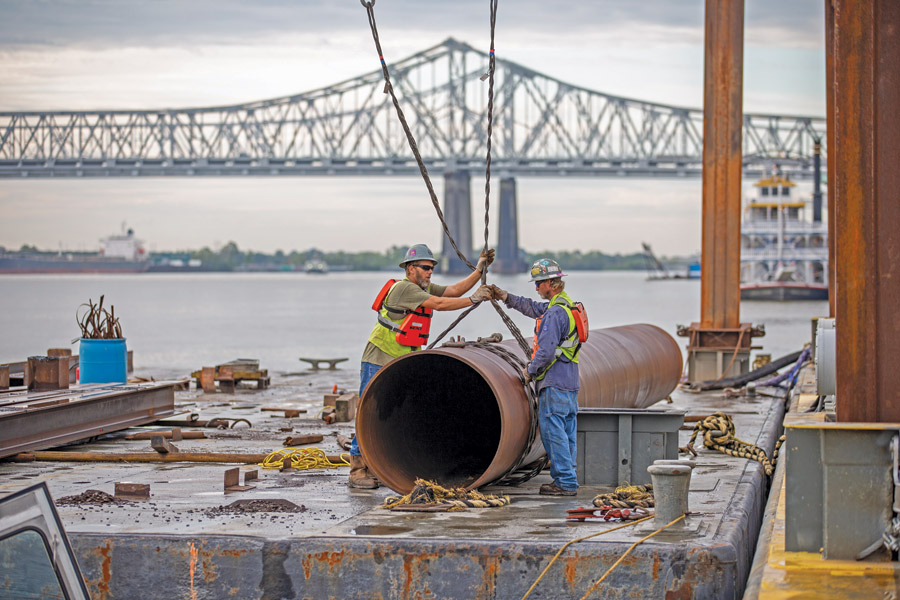 Two construction workers wrapping a 42-in. pipe pile that will be hoisted with a 350-ton crane to be installed for a temporary ferry berthing.
Photos by Joel McLain/APC

“Working on a river is grinding and a challenge,” says Joel McLain, deep foundations project manager with APC Construction. “There are big ships going in and out. We had to have really good communication with the Coast Guard, complete the work on time and do it as safely as possible.”

The nearly 2,400 miles of the Mississippi River begins in Minnesota and ends in the Gulf of Mexico. When snow melts during the spring in the north, the river level tends to rise in the south, specifically in New Orleans and other parts of Louisiana. This often happens in March and April. Because contractors needed to drive pilings into the riverbed, APC employees worked five weeks of overtime, seven days per week from the middle of January through mid-February to try to beat the high river levels.

There were 103 steel piles and 117 timber piles driven into the riverbed, Kenney says. The piling diameter was 14 in. by 0.375 in. by 105 ft. The maximum depth installed was approximately to elevation -90 ft, McLain says. APC Construction says driving those piles was a huge priority for the project.

“We knew we would have to plan for the piling install and think ahead schedule-wise,” McLain says. “We came up with a good engineering template as to where we would be able to install the piles so we could beat the river by two to three weeks.”

The Mississippi River level fluctuates at the Carrolton gauge, which is near the construction site, from an elevation of 1 ft to an elevation of 17 ft, Kenney says. If the river rises to more than 11 ft, the U.S. Army Corps of Engineers will stop construction, she says.

“Generally, you want to stop construction if it’s above 11 feet,” Kenney says. “As far as the river level goes so far, we haven’t had any problems. We worked really hard to get all of the piles driven before the river levels rose. And we were able to complete the pile-driving before the spring rising.”

The team also discovered large amounts of debris located at the bottom of the river. Because of this existing rubble, the team had to be flexible when designing the pile layout. According to Kenney, there were multiple structures in place a century ago at the construction site of the terminal, including the Bienville Street Wharf, Spanish Plaza and a warehouse or government building. Debris from these former structures, including concrete and timber, created challenges for driving pilings. 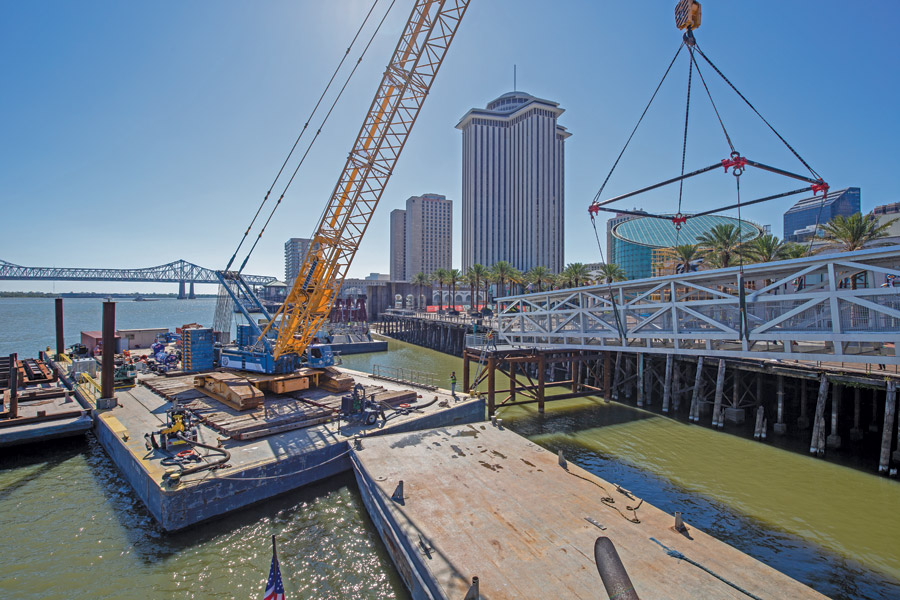 “One of the biggest challenges we faced was the amount of underground obstructions and rubble that had been out there,” says Tom Abernathy, project executive with Woodward Design and Build. “We knew that there would be some debris and that it would be an issue, but not that big of an issue.”

Abernathy says the team hired an archaeologist after hearing about the possibility of a Spanish galleon that was sunk under Spanish Plaza.

“Nothing was found,” he says. “But with the amount of rubble we found, we know there is definitely a lot of history under there.”

The pandemic and Hurricane Ida, which hit the Gulf Coast at the end of August, created its own set of challenges. COVID-related illnesses stunted work crews, and hurricane cleanup for many employees was an issue, Hankins says. But planning, proactivity and communication helped mitigate many of the challenges.

Supply chain hurdles were also an issue. For example, steel prices rose during the construction.

“The escalation of material pricing has been a big deal, steel in general,” Abernathy says. “But we have been pretty lucky on the supply chain side because this project had a good bit of demo work and we started early on procurement activities, and most projects don’t have that luxury. We were able to buy items early. We purchased items a year out and stored them in our warehouse so we have them.”

More than 17,000 working hours have been spent on this project, according to APC Construction, with no reported injuries. But the site’s location in a heavily trafficked area presented even more challenges. The Four Seasons Hotel on Canal Street next door was being renovated. And a streetcar also runs next to the site, so it was essential to keep pedestrians out of the construction area. 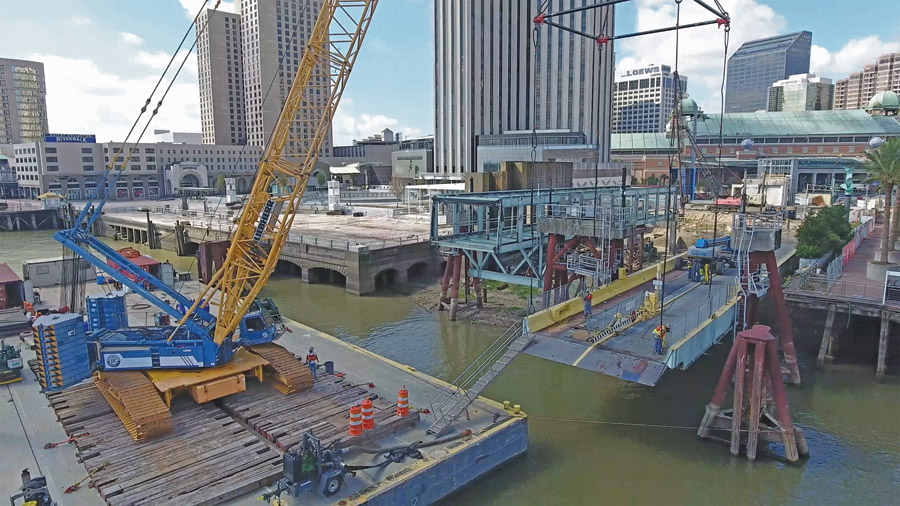 “That location is a high-risk and high-traffic area, so you have to keep your head on a swivel when you’re working there,” says Ryan Casanova, estimating manager for preconstruction for APC Construction.

Technology played a big role. The team met virtually over Zoom and relied on drone photography and an onsite job camera, mounted 20 stories high on a building across the street. This camera helped all involved with real-time decisions and was ultimately a time-saver, Abernathy says.

He says they also relied on 3D modeling of all the spaces to seamlessly install items and save time in the field.

While this project began nearly seven years ago and a lot has changed, one constant player has always remained—the Mississippi River.