This website requires certain cookies to work and uses other cookies to help you have the best experience. By visiting this website, certain cookies have already been set, which you may delete and block. By closing this message or continuing to use our site, you agree to the use of cookies. Visit our updated privacy and cookie policy to learn more.
Home » ABC Survey: Backlog Grows as Prices Increase, Contractor Confidence Drops
NewsConstruction Economics
Construction Economics

The Associated Builders and Contractors Construction Backlog Indicator rose to nine months in May even as contractor confidence declined, the industry group said June 14.

ABC’s backlog indicator, which is calculated using contractors’ revenues from the previous year and current backlog, was up from 8.8 months in April and from 8 months in May 2021. The greatest backlog by sector was in infrastructure, which rose to 9.3 months in May, surpassing commercial and institutional, which had the greatest backlog a month earlier. Geographically, the Northeast and South were tied for the largest backlog with 9.6 months each. 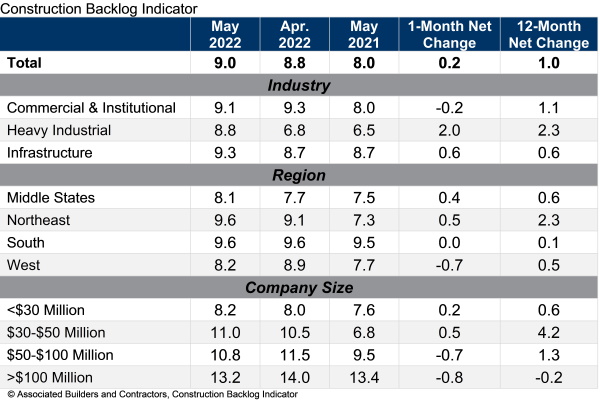 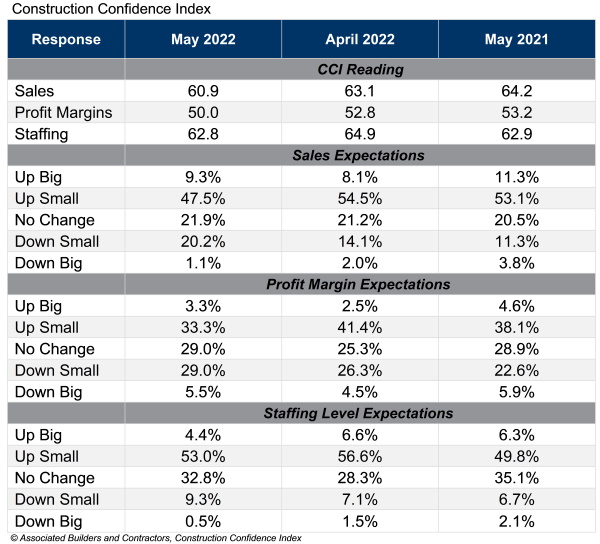 In a statement, ABC chief economist Anirban Basu said it “is simply remarkable that contractors continue to add to backlog amidst global strife, rising materials prices and ubiquitous labor force challenges.” He noted the largest backlog increase was in the industrial segment, in part because of big companies like Intel and Ford expanding their U.S. manufacturing.

“For contractors, the challenge will continue to be the cost of delivering construction services,” Basu said. “The risk of severe increases in costs and substantial delays in delivery remains elevated given the volatility in input prices, the propensity of the labor force to shift jobs in large numbers and equipment shortages and delays.”

Those cost increases are becoming more evident. ABC’s analysis of U.S. Bureau of Labor Statistics data released June 14 showed nonresidential construction input prices in May were up 21.9% from a year earlier.

The largest 12-month percentage changes were tied to energy: natural gas was up 174%, unprocessed energy materials were up 101.1% and crude petroleum was up 59%, the Producer Price Index shows. Many materials prices also continued to rise, with steel mill products up 32.9% and concrete products up 12% from a year earlier.

“Based on the historical lag between the performance of the economy and nonresidential construction spending, more difficult times could be ahead for contractors in 2024 or 2025,” Basu said.

ABC surveyed its members between May 17 and June 3 for the backlog indicator and confidence index readings.

Congress Passes CHIPS Act With $39B for Semiconductor Plant Construction