TTWiiN is a technology incubator founded in 2015 after engineer Thornton Tomasetti merged with Weidlinger Associates, combining technology development in both firms into a division focused on commercializing those innovations. Terms of the deal were not disclosed by Ansys or TTWiiN. OnScale was developed from the Flex family of computer code developed in the 1980s, particularly PZFlex, which can solve large-wave propagation problems found in a range of fields.

“Originally, Flex was developed for seismic waves in the Earth’s crust,” says Ray Daddazio, senior consultant at Thornton Tomasetti, OnScale board member and the last CEO of Weidlinger before its merger with Thornton Tomasetti. “After the [first] Gulf War, the Department of Defense was looking to do better battlefield medicine—triage.”

Daddazio said one of the things that was done under the sponsorship of several defense agencies was add a piezoelectric finite element into the Flex wave propagation code, creating PZFlex. Ultrasonic research groups used PZFlex to solve large, complex problems.

“You could speed up the process of virtual simulations by 75%. It became the de facto standard in the medical ultrasound business for transducer design, and all of the major manufacturers used it. We began to get some real software licensing revenue, and it was a nice little business for us,” Daddazio says.

Cloud computing and the merger of Thornton Tomasetti and Weidlinger created a greater commercial opportunity. Even as Daddazio and Thornton Tomasetti Executive Chairman Tom Scarangello were beginning merger talks in Jacksonville, Fla., in 2014, both men realized that OnScale’s code was perfectly suited to become a cloud-native application and its calculations could be scaled to a place where engineering was moving. As a part of the merger agreement, Thornton Tomasetti agreed to invest $4 million in PZFlex.

Ian Campbell came on as CEO of the renamed OnScale in 2017 and quickly capitalized on its cloud potential.

“We went in thinking the value was going to be in and around the ultrasound industry and continuing to mine that kind of the piezoelectric element of this,” Scarangello says. “Ian recognized the cloud computing angle of it, as the world was pivoting towards cloud computing, and the value of having a platform that already could solve, efficiently, multiphysics problems in the cloud.” 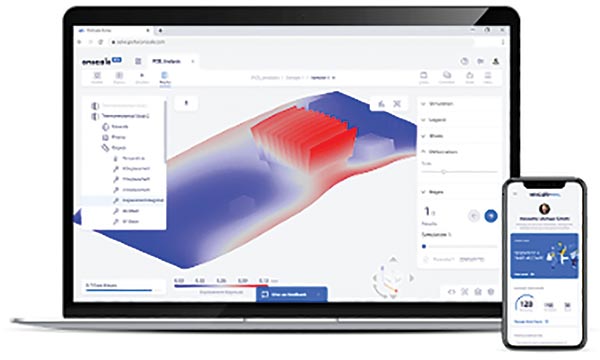 OnScale offers users as much access to high-performance computing clusters as they need to solve complex engineering problems. For Ansys, this means more problem-solving power for its users. Campbell said in a statement that joining Canonsburg, Pa.-based Ansys is “incredibly exciting for me and my team.”

“Customer needs are varied, and any successful cloud strategy must give customers the flexibility to adapt the use of cloud to their unique simulation challenges,” said Shane Emswiler, senior vice president of products at Ansys, in a statement about the sale. “To that end, our cloud strategy addresses the needs of not only existing customers, but any engineer, scientist or professional who can benefit from simulation technology.”

Back at TTWiiN, Daddazio and Scarangello have a portfolio of products still under development, such as a new shock and vibration-isolation mount technology called Pumpkin Mounts, and the 3D collaboration tool Konstru. There are now five companies other than OnScale working within the TTWiiN program.

Scarangello says launching TTWiiN spurred innovation investment inside and outside Thornton Thomasetti. The firm’s second round of IP tools targeted for commercialization started in 2020 under the name TTWiiN 2. It includes T2D2, an AI software platform that detects and classifies visible damage to facades.