Materials supply chain disruptions and the mass retirement of older workers in the skilled trades—a trend that actually began in the 2010s—have forced preconstruction professionals and estimators to be more resourceful than ever.

Ongoing problems with materials production, transportation logistics and the recruitment of skilled workers have driven contractors and developers to find new ways to track, manage and, in some cases, negotiate prices of the materials and labor they need. Technology is filling a match-making gap for both that was previously dependent on long-term sales agreements and personal relationships.

Sourcing cross-laminated timber and glulam columns from suppliers in Austria via alternative ports that weren’t backed up helped the project avoid delays until one of the shipments arrived unexpectedly at the Port of New Haven, Conn. Customs and Border Protection impounded the wood as an invasive species. The only way to get it cleared was for Litwin to submit documentation to the U.S. Dept. of Agriculture and register as a mass timber importer. 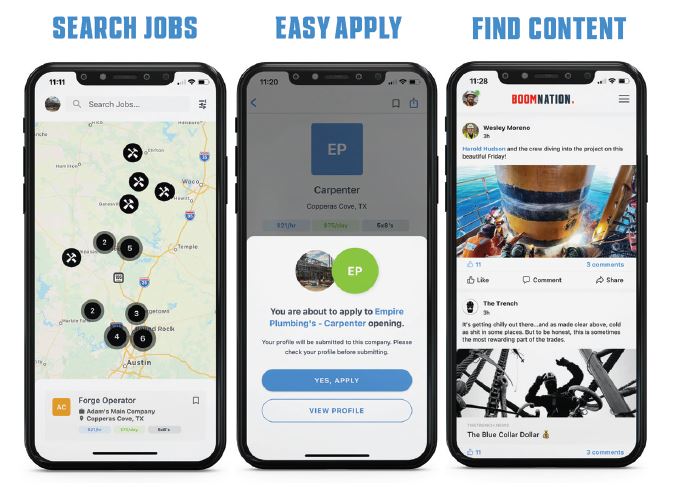 “I had to laugh. I called them without knowing who to talk with, and the guy I needed happened to be there. He expedited the process, and I became a mass timber importer,” Litwin says. The materials were released in 10 days.

Resourceful thinking and lucky breaks like that have helped contractors as they turn to alternative sourcing for materials. Many more are relying on applications that match them with the materials and skilled labor they need in a time of uncertainty.

The “just-in-time” mindset is being challenged as some contractors add warehouse space to store materials and deliberately purchase whole shipping containers of materials for multiple projects well ahead of time to lock in prices. The Russia-Ukraine war has not yet led to supply disruptions like those seen from the COVID-19 pandemic, but one commodity that’s been limited by the war—pig iron for steel—is already affecting global steel markets as both countries are lead exporters to the U.S.

Getting involved earlier in purchasing  steel and lumber has become a regular strategy for Duda’s group to mitigate cost escalations. McCarthy’s national groups use their pooled buying power to source equipment such as air handlers and generators, even buying direct for a client or a trade contractor to help mitigate their scheduling-related costs. 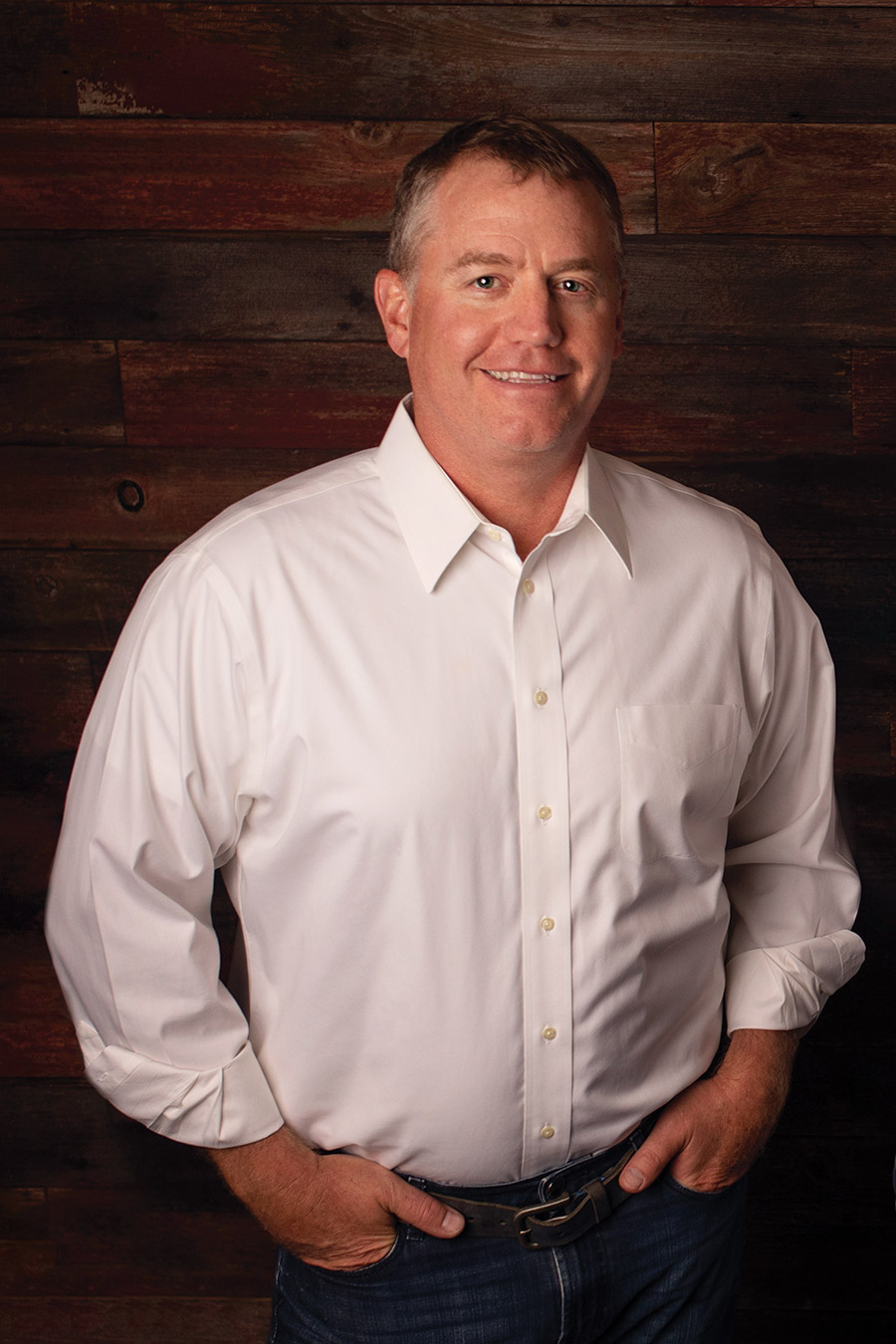 Duda said that many McCarthy business units nationwide are lending warehouse and onsite laydown space for materials ordered early. “We’re seeing trends where our clients are finding space in places where we can store material on their sites.” Duda says. “Not only the contractors, but the owners understand the risks and try to come up with new ways to do things.”

While lumber prices have come down from the highs of 2020, they remain volatile, with a constrained supply. On many trading days this year, prices of the CME lumber futures contract have moved so sharply that they have ended the day at limits set to ensure an orderly market. Once the price rises or falls to the maximum, there can be no more trades in the direction the market was moving. Some days, trading opened and was locked at the limit and remained there all day. Contractors trying to secure large quantities of lumber for projects by reserving it were stymied.

Michael Wisnefski got involved in trading lumber futures in the 1990s when it was still done on CME’s call out floor. He’d buy railcar quantities, divide them into smaller lots, then sell and ship them to customers. When the lumber-trading pit closed in 2015, he got together with a trading platform provider and built the first version of MaterialsXchange, which came online in 2019. 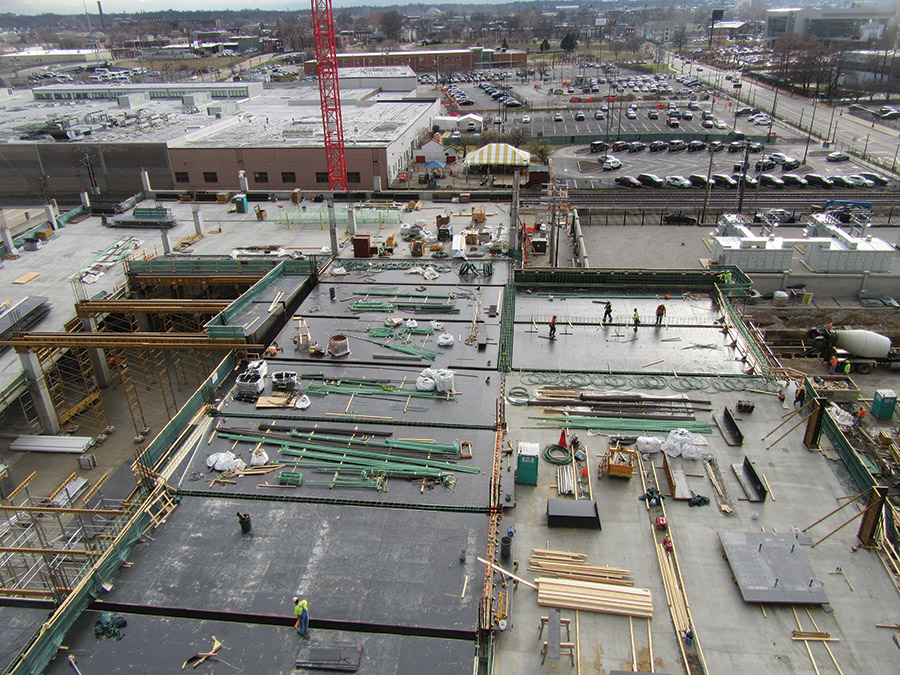 2x4s are being used for concrete framing by McCarthy crews on the Washington University School of Medicine’s neuroscience research building. These are the same wood products that are traded on the CME lumber futures contract.
Photo by Jeff Yoders for ENR

“There were some younger minds in the early going that looked at how lumber is sold and said, ‘well, that’s ridiculous,’” Wisnefski says. “There’s a major barrier to entry because the product is sold on a relationship. If I don’t have a relationship, I’m not gonna get the product. Where we come in is, all you need is a relationship with the market and access. So you come to our platform and now we give you immediate access.”

MaterialsXchange matches sellers who have available lumber with contractors and other buyers who need it. Several preconstruction professionals mentioned using it, but they were reluctant to discuss details of their experience with such newly emerging  markets for this article.

Wisnefski admitted that buying on the cash market in this fashion makes contractors have to change how they inventory and physically store and keep the wood, but using MaterialsXchange gives contractors access to a segment of the market, the cash segment, that they wouldn’t have had access to previously.
“Do we have people using our platform from the contractor side? The answer is absolutely yes,” he says.

Similar to platforms that collect and organize construction data such as Procore or Autodesk Construction Cloud, Wisnefski says price information that MaterialsXchange collects can, eventually, lead to smoother supply chains by recognizing bottlenecks and advising producers on how to mitigate them. While the Chicago-based company is focused on lumber for now, he said that rebar, recycled paper and corrugated cardboard are materials they would eventually like to add to the exchange. 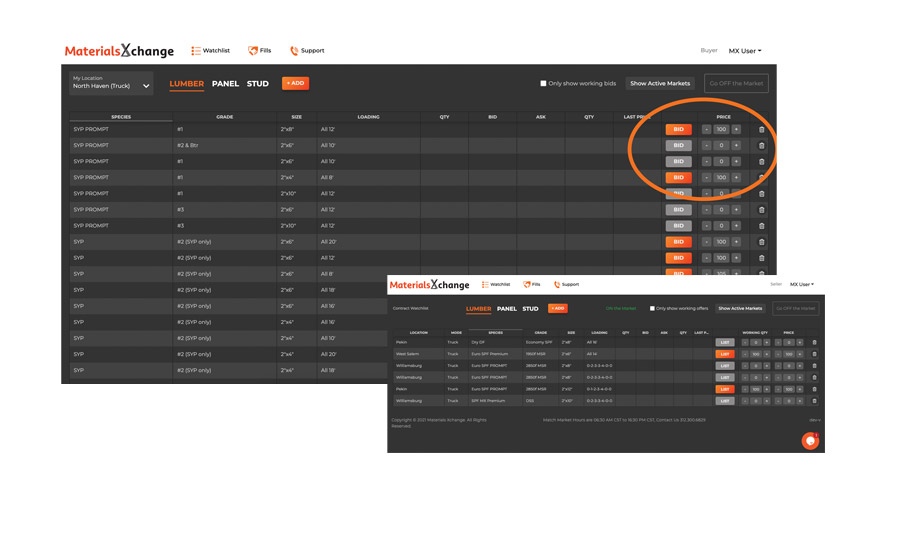 MaterialsXchange gives contractors and other customers access to bid on quantities of lumber. It has 10 mills and wholesalers as active sellers and a logistics partner to arrange rail shipping.
Screenshots courtesy of MarterialsXchange

The market for skilled labor has forced  project managers and executives to turn to other methods to fill their needs. A National Federation of Independent Businesses survey in April found in construction that 54% of job openings are for skilled workers, and 64% of construction companies reported few or no qualified applicants.

“There is so much talk right now about how employers in industries like construction can’t find verified skilled workers to fill positions, and at the same time, workers say they can’t find jobs,” says Brent Flavin, co-founder and co-CEO of BoomNation, a Baton Rouge, La.-based web and mobile app platform that aims to match skilled workers with the contractors who need them. Chris Meaux, founder of food-delivery app Waitr, is its other co-CEO.

"You come to our platform and now we give you immediate access [to the materials]"
—Michael Wisnefski, Co-Founder and CEO, MaterialsXchange

BoomNation’s app sends notifications directly to skilled workers who’ve been certified for work in fields such as mechanical contracting, electrical, plumbing, carpentry and ironwork about open jobs in their localities. For employers, it expedites training and onboarding by running it all through a mobile app.

Meaux and Flavin say one of the oft-overlooked aspects of skilled trade contractors is that traveling the country doing skilled work makes them not only mobile-friendly, but their phones are often their only lifeline to new work. Flavin said that, with so much work, having a streamlined experience where they can apply easily is ideal. Aside from Meaux, BoomNation’s founders all had experience in the skilled trades. The company looks to build a community that’s doesn’t have to rely on word-of-mouth referrals or hearsay of possible job openings. One of the app’s community features lets workers record videos to discuss issues about finding work and what’s important to workers in the trades.

“When travelers get involved it becomes crucial to make sure they’re skilled, trained and can bring the quality work,” Duda says. “We work a lot with our trade partners on staying ahead of it and ramping up jobs [as needed].” The BooomNation app is available on the Google Play and Apple App stores.

As with material supply issues, several of the large trade contractors that ENR spoke to said that the shortages are a bigger issue in predominately non-union states. Size matters in construction, and one large Illinois mechanical, highway, paving and building automation contractor said most of its work is in higher-paying regions. “Since we’re all union, we can get travelers to come to those projects. Similar story for materials; we feel like we have good leverage with suppliers and manufacturers because of the volume we buy and haven’t had to resort to any third-party channels,” says Brian Helm, president and CEO of Helm Group in Chicago.

“Not only the contractors, but the owners understand the risks and try to come up with new ways to do things.”
—Mark Duda, Senior Preconstruction Director, McCarthy Building Cos.

The work processes of trade contractors also differ from those of general contractors, and new, more focused app-based products are now emerging to cater directly to their needs as opposed to the offerings from the software giants whose products target general contractors. While BoomNation’s mobile focus is on the employment and community part of a trade contractor’s work life, eSub is a field-first project management platform built specifically for commercial subcontractors, with an emphasis on ease of use.

“We’ve tried to give them something that’s lightweight enough that it doesn’t feel too burdensome or taxing when they first look at it,” says Greg Fry, vice president at eSub, who previously spent seven years working on Trimble Viewpont. “There is enough in there that handles the majority of what’s mission critical from a day-to-day project management standpoint.”

Fry says he had worked with customers looking to add work-order management when he was at Viewpoint, and those same customers have since embraced strategic diversification in their businesses, phasing out older methods such as paper-based workflows to improve collaboration.

In fact, working together earlier is being recognized as a value in the chain by all involved, according to Duda. “McCarthy’s busy right now—that’s a success story in itself,” Duda says. “If you look at it across the board, I’d say the majority of our projects have some form of early [trade] contractor involvement.” Duda says uncertainty is also driving clients to get involved earlier on in CM-at-risk and design-build project delivery. “You’re seeing those projects move ahead. Just moving ahead, in this environment, and keeping up the volume of work we’ve had is being successful.”