This website requires certain cookies to work and uses other cookies to help you have the best experience. By visiting this website, certain cookies have already been set, which you may delete and block. By closing this message or continuing to use our site, you agree to the use of cookies. Visit our updated privacy and cookie policy to learn more.
Home » NTSB Pittsburgh Bridge Probe Update Sheds Light on Collapse Sequence
ProjectsBusinessTransportationGovernment
Bridge Collapse Investigation

Findings on probable cause of failure not expected until 2023

The National Transportation Safety Board (NTSB) has issued an update in its investigation of the Jan. 28 collapse of Pittsburgh's Fern Hollow Bridge that provides additional information about how the collapse proceeded, but does not discuss why the accident occurred. That finding of a probable cause isn't expected until sometime in 2023.

In the new report, released on May 5, the safety board noted that its investigation is ongoing.

Meanwhile, crews were getting ready to start foundation work on a replacement bridge within days, Alexis Campbell, Pennsylvania Dept. of Transportation press secretary told ENR in a May 5 email.

NTSB says "structural failure" caused the 447-ft-long bridge to drop about 100 ft into the park below it. The accident resulted in injuries to eight people, who were in vehicles on the bridge at the time of the collapse, according to the safety board.

The new update includes two images taken from video footage from cameras on a transit bus that was on the bridge at the time of the accident.

One image, from the bus's forward-facing camera, shows the bridge deck separating at the structure’s east expansion joint: 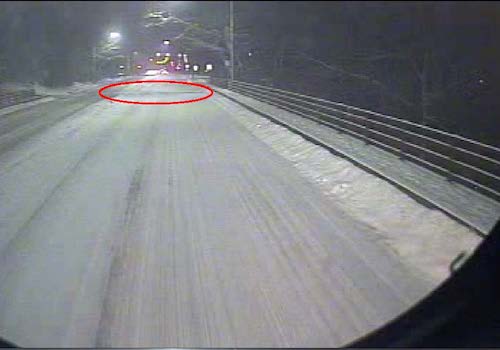 Another image from the curbside camera “showed that, at nearly the same time, the west end of the bridge had already fallen off the west abutment,” the report stated. 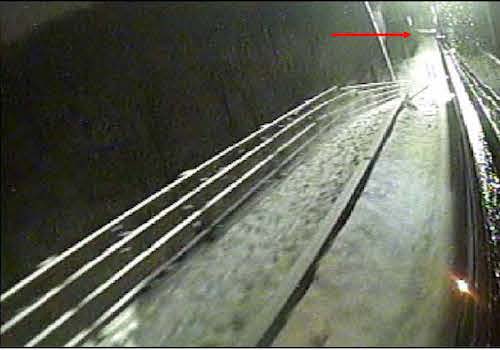 The report continues. "The ends of the structure rested on reinforced concrete caps on stone masonry abutments. Each girder was additionally supported by two inclined, welded steel frame legs, also made of uncoated weathering steel, which rested atop concrete thrust blocks.”

Bridges of a similar types of structure can be found in other states. But in the NTSB's new update, it said, “The investigation has not found any evidence of widespread deficiencies with rigid K-frame superstructure types.”

The safety board added that its investigators and others from the Federal Highway Administration will be carrying out mechanical and chemical tests on material samples from each bridge leg and of several girder sections.

The NTSB said, “All aspects of the collapse remain under investigation while the NTSB determines the probable cause, with the intent of issuing safety recommendations to prevent similar events.”

PennDOT's Campbell says, "We are reviewing the update issued by the NTSB and continue to cooperate with the investigation."

Meanwhile, construction of a replacement bridge is getting underway.

The city of Pittsburgh owns the Fern Hollow Bridge but has turned over the management of the new bridge project’s design and construction to PennDOT.

Shortly after the collapse, PennDOT chose the design-build team of HDR and Swank Construction for the replacement bridge, which is being built along the same roadway alignment and the same width as its predecessor.

Campbell said, "The contractor began mobilizing for construction in mid-April and crews are preparing for early foundation work to begin this week."

To finance the project, PennDOT is drawing on $25.3 million in federal highway funds, from the Infrastructure Investment and Jobs Act.

In a March 8 statement, PennDOT said the new plan is for a “three-span continuous composite prestressed-concrete I-beam with integral abutments.”

The agency said the replacement bridge is anticipated to have four 10-ft-wide lanes, plus 2-ft-wide shoulders, a 5-ft-wide sidewalk and a 10 ft, 5 in.-wide shared-use path on the bridge’s southern side.