Overall nonresidential construction spending declined on a monthly basis of 0.8% in March, according to an Associated Builders and Contractors analysis of U.S. Census Bureau data published May 2. That followed nonresidential spending gains in the first two months of the year.

Spending in March was still up 5.6% year-over-year, thanks in part to a 31.9% gain in manufacturing construction spending since March 2021, according to ABC. Using a seasonally adjusted annual rate, nonresidential spending totaled $839.2 billion in March—or roughly half of the $1.73 billion overall total for the month. However, spending was down on a monthly basis in 11 out of 16 categories.

Religious, amusement and recreation and commercial construction sectors saw some of the greatest proportional one-month declines. The declines are actually worse than they appear because the numbers aren’t adjusted for inflation, says Anirban Basu, ABC’s chief economist. 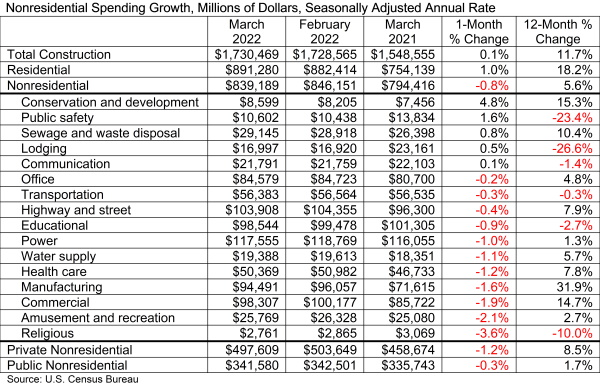 Courtesy of the U.S. Census Bureau via ABC

Efforts by the Federal Reserve to combat inflation may help contractors by improving inputs pricing, but a potential recession could also cut demand for private construction, Basu added.

Associated General Contractors responded to the Census Bureau data by calling on the Biden administration to end tariffs in lumber, steel and aluminum products to curb rising prices, and on Congress to add funding for technical education and apprenticeship programs to help counter worker shortages.

"Now that Congress has funded a substantial increase in infrastructure construction, it is imperative that the supply of materials and workers be increased as well," AGC CEO Stephen Sandherr said in a statement.