For the sixth consecutive year, total revenue for the Top 500-listed firms increased. A closer look at the numbers tells the full story.

If ENR Top 500 Design Firms are feeling the pinch from rising costs, it isn’t represented in their revenue totals—yet. Design firms overwhelmingly report that funding from the Infrastructure Investment and Jobs Act is already having a significant influence on company scope of programs with local and state agencies.

For Kimley-Horn, which rose to No. 10 from No. 15 last year, one of the company’s “fastest-growing markets focuses on the rapid transition to zero-emissions vehicles,” says Jenna McDavid, its electric vehicles practice director.

Mid-tier firms ranked from No. 50 to No. 100 also seem to be prepping to grab their share of federally funded projects. Revenue numbers show that they increased their profit margins last year, and gross revenue rose 11.1%, on average.

After recovering somewhat last year, revenue numbers for the petroleum design market plummeted 27.6% in 2021, down to $7.15 billion. The market is at its lowest level since the 2004 Top 500 list.

The largest riser is the industrial process market, up 32.5% to $5.36 billion. That is the highest total revenue the market has seen since 2013. 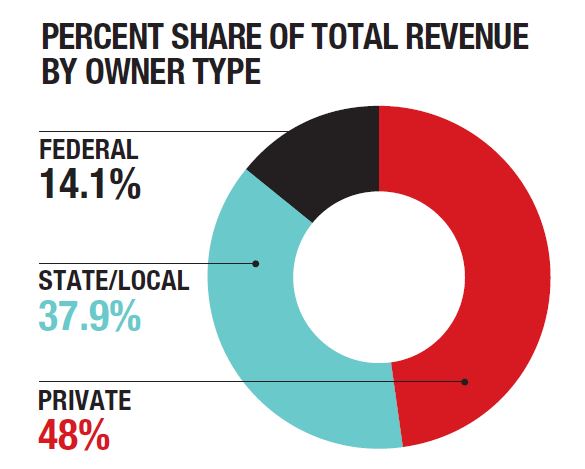 Longer term, the share of Top 500 revenue owned by the leading 10 firms has decreased significantly in the past decade. The top 10 accounted for 43.3% of total 2012 Top 500 revenue. That number dropped to 35.5% on this year’s list. Medium-sized firms have been the particular beneficiaries of this change. Firms ranked between Nos. 126 and 250 have increased their share of revenue to 11.5% this year from 8.3% in 2012. Firms ranked from Nos. 251 to 375 have risen from 4.7% to 6.2% of the total. This trend has already been spotted by industry observers.

Studies done by Morrissey Goodale, a Natick, Mass.-based management consultant and M&A adviser, point to the influx of private equity into the industry as a prime mover. According to the firm’s data, the median revenue of private equity-backed firms in the top 100 of ENR’s Top 500 list grew 31% between 2017 and 2020. Publicly traded firms grew 8%.

Much of that private equity-backed growth is built through acquisition. Purchase deals backed by private equity firms increased to 35% of the total number of U.S. deals last year, from 10% in 2013, according to Morrissey Goodale data.

In contrast, the share of acquisitions made by public firms has been dropping steadily. These accounted for 25% of all acquisitions in 2007 but are down to just 6% year-to-date in 2022. Morrissey sees a market where it is increasingly difficult for publicly traded firms to outbid their private equity rivals. “In some cases, PE firms have as much capital available to deploy as these big public firms,” he says.

Ardurra fits that profile, making 20 acquisitions as part of an expansion program implemented in 2017.

“We set out to build and grow a culture-focused firm with the driving philosophy centered around providing opportunities for our employees and exceptional service to our clients,” says CEO Ernesto Aguilar. “This foundation has guided us in expanding existing services and territories, as well as penetrating new markets and geographies.”

Ardurra’s strategic plan sets goals for acquisitive growth at 20% and organic growth at about 15% per year, says Aguilar, and tactics to achieve goals must align with its market share expansion strategies. The company recently entered the transportation design services market as a result of its acquisitions, he adds.

At CMTA, recent mergers and acquisitions have enabled the company to implement significant geographical expansion. The company became a portfolio firm for equity investor Blackstone in 2021.

“Within our family of companies, we can now help our clients create and raise funds for projects, provide them with high performance-based engineering design, and provide solutions to design, build, lease, operate and guarantee performance, including systems installation and construction management,” explains Tony Hands, electrical engineer and vice president.

Outside of ENR’s Top 10, other factors are contributing to a growth in market share for firms.

"We have found through interviews that the very large, large and mid-sized firms are preferred by clients due to being part of their community and being local—understanding local dynamics to get work done effectively,” the group says. It defines ENR firms ranked at Nos. 11-100 as large and firms ranked at Nos.101-500 as midsized. Firms not on the Top 500 list are defined as small.

The authors add that the largest firms also may be turning their attention to larger, programmatic contracts “that generate revenue over a period of years rather than months.” They also see the largest firms focusing their efforts outside of the U.S., as well as moving toward a more “transactional and economically driven approach.”