This website requires certain cookies to work and uses other cookies to help you have the best experience. By visiting this website, certain cookies have already been set, which you may delete and block. By closing this message or continuing to use our site, you agree to the use of cookies. Visit our updated privacy and cookie policy to learn more.
Home » Contractors Seek Out Latest Machines at World of Concrete
EquipmentMaterialsConstruction technology
Equipment and Materials

After a few uncertain years and a truncated event in 2021, the World of Concrete trade show brought together tens of thousands of contractors and construction equipment gearheads in Las Vegas on Jan. 18 to 21. Nearly 37,000 attendees came by to check out the latest equipment and products from over 1,100 equipment, tool and materials vendors.

And if the mood at the show was surprisingly upbeat, it was likely driven by some strong construction activity across the country. Despite multiyear disruptions from the COVID-19 pandemic, the Portland Cement Association is forecasting another strong year for cement consumption and construction activity in 2022 and beyond.

Even with data from December not yet available, PCA is forecasting that year-over-year cement consumption growth in the U.S. will be up 3.2% for 2021. That’s being driven by construction activity in specific sectors and regions, according to  PCA chief economist Ed Sullivan. “What’s really been propelling it has been residential [construction],” he says. “It really hasn’t been the public side, and it certainly hasn’t been the non-residential side.” Sullivan adds that the 2021 activity was mostly in the Southeast and East Coast regions, a marked change from 2020, where cement consumption was driven by activity in the Mountain West.

But the residential boom could be curtailed by an expected rise in mortgage rates in the next few years, and this is when the recently passed Infrastructure and Jobs Act might kick in. Citing the complex process of grant applications by cities and states, along with bidding processes, Sullivan expects construction activity from the bill will not be evident right away. “In our calculations you’re not going to see this materialize until 2023,” he says. Based on that and other factors, Sullivan expects year-over-year growth in U.S. cement consumption to decline slightly in 2022 and 2023, picking up again in 2024.

As for the more immediate future, while Sullivan and PCA are optimistic about current levels of construction activity going forward, he does not see a quick resolution for the supply-chain issues that have snarled much of the industry. “There’s not much policy [the U.S. can implement] to solve this—it is an international problem,” he says. “This is going to take a while to untangle.” 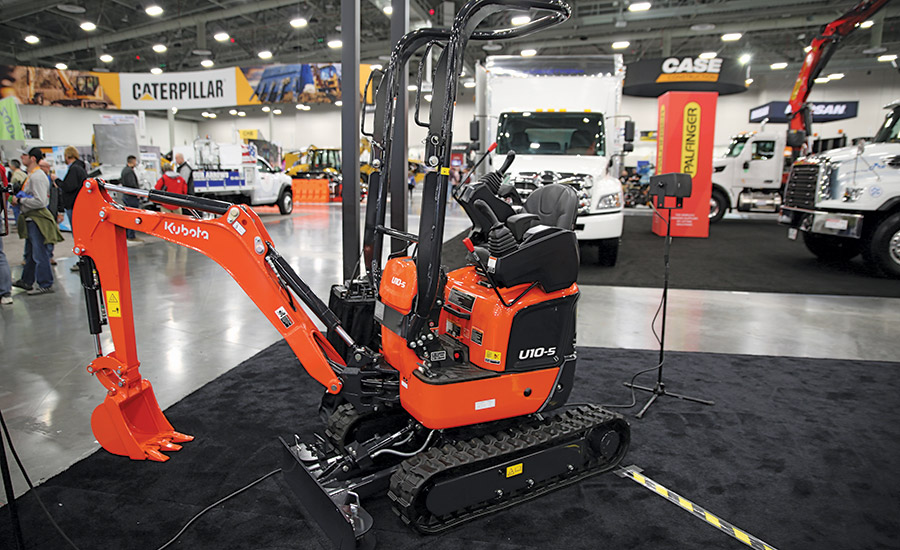 In an outdoor lot, Copenhagen-based manufacturer COBOD International ran a demonstration of its 3D concrete printer, the BOD2, in partnership with one of its U.S. customers, builder-developer WePrintHomes, and material provider QuickCrete. The printer extruded concrete walls several feet high during two-hour demo sessions.

While the speed of printing during the demo was slower than the 500-mm-per-second maximum recommended pace, Philip Lund-Nielsen—co-founder and head of Americas for COBOD—says that printing speeds continue to increase as modular equipment is updated and printing crews grow more accustomed to the technology. In Germany, PERI—another COBOD partner—printed a 4,100-sq-ft, three-story apartment building with five units in just 21 days, Lund-Nielsen says.

“We’ve sold over 35 printers of this particular model, and we just last week sold an additional three here in the U.S., so it’s really increasing in regards to adoption,” he adds. COBOD also recently partnered with GE Renewable Energy and others to print a 10-m-high wind-turbine tower-pedestal prototype.

Back on the show floor, Liebherr introduced the THP 80-LP truck-mounted concrete pump, the smallest in Liebherr’s lineup for the North American market. It is intended for use in urban environments and sites with limited access. At only 22,684 lb, the THP 80-LP does not require a commercial driver’s license to operate, offering more flexibility for crews. Despite its smaller size, it has the same heavy-duty pump and high-capacity hopper as Liebherr’s larger boom trucks.

Kubota was on hand with its new U10-5 mini-excavator that boasts a “near zero-tail swing,” according to Kubota product manager Patrick Baker. An improved version of the 1-ton-class mini-excavators Kubota offers for the rental market, the U10-5 sports a redesigned ROPS that almost eliminates tail swing. “Just 0.6 of an inch hangs over the tracks, so we do classify it as a minimal tail swing,” says Baker. He adds that U10-5 is able to handle many jobs that call for a zero-tail-swing mini-ex, including work alongside active roadways. 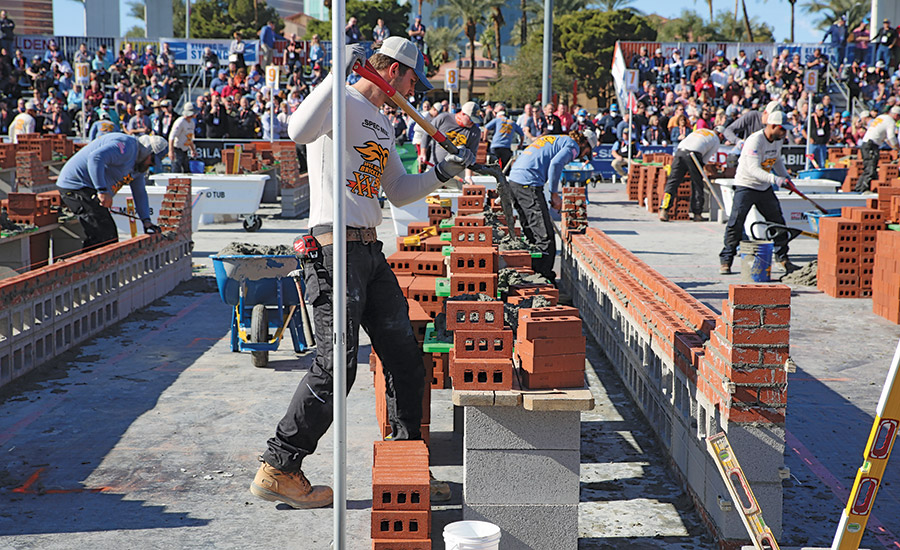 While this World of Concrete saw smaller crowds compared to typical years, it still managed to fill the grandstands for the Spec Mix Bricklayer 500 showdown. Teams of masons and tenders had one hour to build the biggest, best-quality brick walls they could as crowds cheered them on. When the dust settled, it was the team of mason Cole Stamper and mason tender Jeff Becker of Lexington, Ky., who won the top prize with a 760-brick wall. The pair took home a brand-new Ford F-250 4x4 pickup truck along with $10,000 in additional cash and prizes.

Latest in Hydrodemolition Machines on Display at World of Concrete 2020