This website requires certain cookies to work and uses other cookies to help you have the best experience. By visiting this website, certain cookies have already been set, which you may delete and block. By closing this message or continuing to use our site, you agree to the use of cookies. Visit our updated privacy and cookie policy to learn more.
Home » Chris Frieberg: Leading A Major Collaboration For Fast Fix of Cracked Tie Beam on Key I-40 Bridge
Southeast Construction CompaniesAwardsTop 25 Newsmakers2021
ENR 2021 Top 25 Newsmakers

Teamwork, collaboration and trust would prove just as critical as technical skill and logistical resourcefulness in reopening the Interstate 40/Hernando de Soto Bridge, closed in May 2021 following discovery of a cracked tie beam. An effort that began shrouded by multiple uncertainties quickly gave way to a successful stabilization and repair strategy that had traffic safely back on the key Mississippi River crossing between Tennessee and Arkansas in less than three months.

“The collaboration was there from the first phone call with the design and consultant team after we were selected,” Frieberg recalls. “Everyone understood the magnitude of the problem, as well as the key issues associated with the repair concepts and how the process would unfold.”

Still, time was of the essence to repair the crack, eventually traced to a weld defect that likely occurred during tie-beam fabrication.

By the end of the first week, Kiewit workers had stabilized the fracture area with a “splint” composed of 30,000 lb of structural steel plates. In phase two, a 150-ft-long section of tie girder encompassing the fracture area was beefed up with 108,000 lb of additional redundant plating. Eight 3-in.-dia high-strength post-tensioning rods installed alongside the beam transferred 1.2 million lb of tension to the composite section. 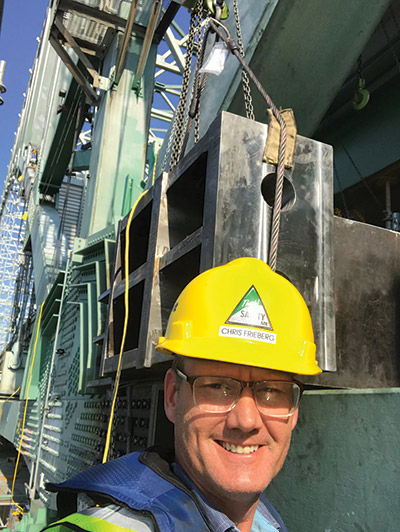 Throughout the process, it was up to Frieberg to keep the entire CMGC team pulling in the same direction, tackling myriad challenges from sourcing the needed fracture-critical steel to ensuring the tension transfer posed no risk to workers on the bridge.

Ted Kniazewycz, director of the Tennessee Dept. of Transportation’s structures division, calls Frieberg “a steady leader” who brought “an attitude of safety, innovation and teamwork to a very complex and critical infrastructure project.”

The final phase of the repair effort—reinforcing more than 40 similar weld anomalies to prevent the formation of new cracks—was completed in July, allowing the bridge to reopen just 83 days after the initial emergency shutdown.

“It’s a project I’ll probably talk about the rest of my life,” he adds.