This website requires certain cookies to work and uses other cookies to help you have the best experience. By visiting this website, certain cookies have already been set, which you may delete and block. By closing this message or continuing to use our site, you agree to the use of cookies. Visit our updated privacy and cookie policy to learn more.
Home » Urban Campus Aims to Become One of France's Largest Low-Carbon Buildings
Sustainability
2021 Global Sourcebook

Eiffage Construction broke ground on a new ecological urban campus in Clichy, France, northwest of Paris. The commercial project, dubbed BLACK, will provide about 530,000 sq ft of office space, accommodating up to 4,100 people. The 26-month project is expected to deliver in late 2023 with an estimated 300,000 work hours. It will require the use of five cranes. The six-story project plus basement level comprises two separate structures, including a 340,000-sq-ft “garden” building and a 190,000-sq-ft “courtyard” building. The facility will feature an auditorium, concierge service and three commercial properties. The project, which was designed by Emmanuel Combarel Dominique Marrec Architectes, was in redesign for nearly a year to accommodate increased demand for remote work. First-floor offices will be 100% reconfigurable into meeting rooms. Large collaborative spaces will be developed on the upper levels. The project will feature industrial pre-walls, metal substructure and a facade with stabilized timber cladding. Built on a former industrial site, the project aims to become one of France’s largest low-carbon buildings. The project is targeting multiple certifications, including HQE New – Outstanding Level, BREEAM Excellent, BBCA, E+/C- Level E1/C1, Biosourced Building Label, BiodiverCity, Osmoz, R2S and Wiredscore. As part of its goal to enhance the city’s urban redevelopment, two gardens—spanning more than 100,000 sq ft combined—aim to create “urban cool islands,” according to Eiffage. 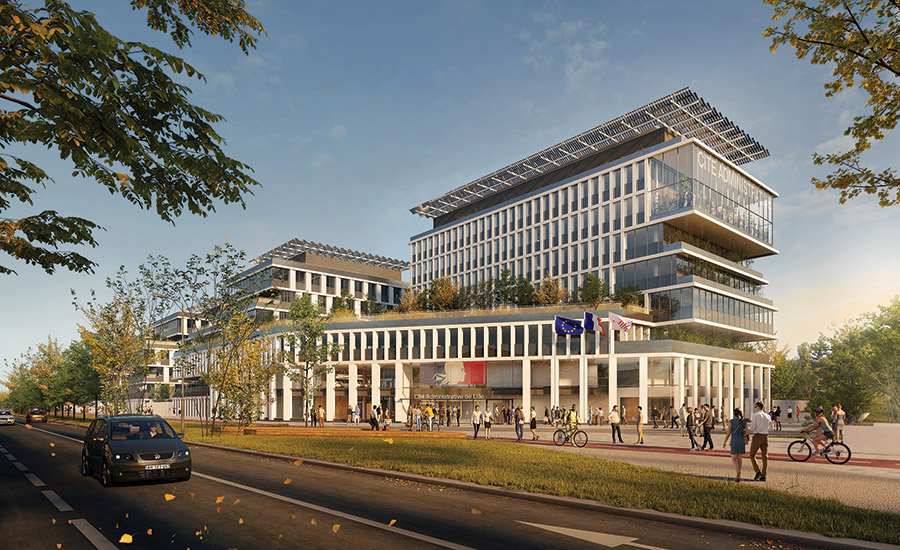 A consortium led by Bouygues Bâtiment Nord-Est started construction on a new Cité Administrative building in Lille, France. The 415,000-sq-ft complex is comprised of five buildings, consolidating 18 government services and agencies that are currently spread across multiple buildings in Lille. The complex, designed by architectural firms Valode & Pistre and Coldefy, is scheduled for delivery in late 2023. The project will seek multiple certifications, including PassivHaus, Osmoz and Effinature. It is designed to achieve E3C1 and the first level of Bâtiment Biosourcé thanks to the use of more than 700 tons of timber. Contract value of the project is $120 million, of which Bouygues Construction’s share is $112 million.

VINCI Construction UK has started building the $102-million Student Accommodation Project 3 for the University of the West of England in Bristol. The project is designed to be one the largest Passivhaus-certified developments in the U.K. The 280,000-sq-ft facility will house 900 beds across a mix of studios and four-, six- or eight-bed clusters. The project is scheduled to complete in time for the 2023/2024 academic year.

CPB Contractors, a CIMIC Group company, started construction on Parkline Place, a 39-story commercial development above the future Sydney Metro’s Pitt Street Station. The $274-million project was awarded by consortium partners Oxford, MEA and Investa. Construction is scheduled to complete in 2024. The project is the latest for CBP Contractors at the new Pitt Street Station site, where it is also building the $328-million station and has been contracted to construct a $106-million build-to-rent building above the station’s southern entrance.

PORR recently completed foundations for the ABC Tower at Alexanderplatz in Berlin, which upon completion will be the second-tallest building in Berlin. The 500-ft-tall residential tower, designed by O&O Baukunst, features 39 floors and will total 450,000 sq ft. The $270-million project is the largest single building contract in the firm’s history. Construction is expected to take 41 months.

Skanska announced it will develop and construct Tora, a multifamily rental project in Stockholm, Sweden. The company will invest approximately $50 million, including $34 million for construction. The project will include four buildings with a total of 145 rental apartments and will feature multiple sustainable elements, including Skanska’s green concrete, which the company claims has half the climate impact compared with regular concrete. Preparatory work is underway. Completion is expected by the end of 2024.