The U.S. Army Corps of Engineers is scrambling to rebuild levees, roadways and other battered infrastructure in northern Washington state in the wake of epic flooding that began in mid-November caused by record rain triggered by atmospheric plumes of deep tropical moisture. The damage was even worse in adjacent British Columbia, resulting in a province-wide state of emergency through Dec. 14 and Canada’s first ever “red-level alert.”

Thousands of people were at least initially displaced, with at least five killed.

“It will be very significantly expensive to rebuild our infrastructure, and to build it to a more resilient standard,” Fleming said on Dec. 3. He said all new infrastructure will be built using climate change-resilient design guidelines. The federal government has promised the rebuilding effort will receive financial aid.

The province has issued two requests for qualifications to industry firms for rebuilding roads and bridges. “We’ve never seen this magnitude of so many at one time,” Kelly Scott, president of the BC Road Builders and Heavy Construction Association. told local media in early December. Contracts may include financial incentives to accelerate work. 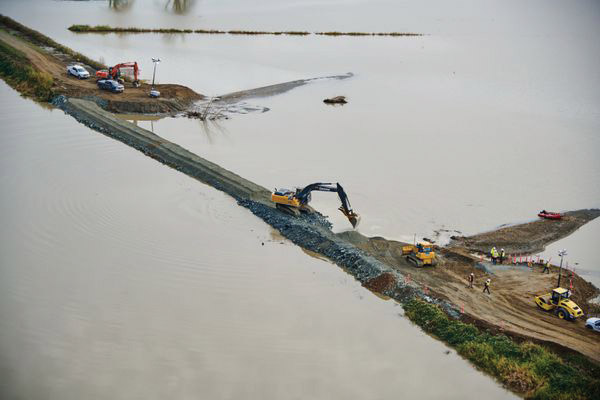 Related to B.C. flood defense damage, one provincial official Interviewed by The Globe and Mail late last month, could not provide a total number or locations for dike failures. A provincial government statement said local governments “are still assessing the consequences.”

According to the newspaper, a March report for the Fraser Basin Council said that most B.C. dikes "do not fully meet provincial standards” and would likely breach even during relatively weak storms.

“The whole project of preparing for floods appears to have been handed off to an endless procession of agencies and study panels endlessly bogged down in stakeholder issues and a multitude of interests,” said Financial Times columnist Terence Corcoran, in a Nov. 25 opinion.

In Washington, the Corps, private contractors and local officials have been repairing breaches in three different levees along the border, as well as filling in massive holes scoured out by rampaging waters. Across the border, a parallel effort is taking place.

“It’s not one storm but a series of storms since the middle of November,” says Marie Duckworth, spokeswoman for Whatcom County Public Works. She adds that county damage could reach $50 million, but there is no official estimate. "It could very well be the worst disaster that has ever hit our community."

One complication is that some Canada flooding appears to have come from rivers that flow north across the U.S. border, with low-lying farmland exacerbating the problem. With soil oversaturated, landslides were triggered, says Duckworth.

Corps levee repair work in the county has been a stop-and-start effort, with crews having to retreat and return after each storm, says Keith Rudie, a Corps engineer. In addition to filling levee wall breaches, the Corps and contractors have had to fill in deep holes gouged out of the base of the barriers, he says.

Flood waters overran levees in various locations, with the water scouring out holes as deep as 30 ft and 70 to 100 ft long. Reaching some damaged sites required laying down a temporary road across previously flooded fields.

In a sign of progress, the Trans Mountain pipeline restarted on Dec. 4, after a roughly three-week shutdown. The pipeline each day funnels 300,000 barrels of crude oil from Alberta to export terminals on the Pacific coast and provides gas supply in the province.

“Infrastructure across Canada is not being built for the risks that are on the horizon when it comes to climate change,” Dylan Clark, a senior research associate at the Canadian Institute for Climate Choices, told ENR, noting need for better planning ahead.

Vancouver issued permits for more than $1 billion in development from 2017 to 2021 on sites facing serious flood risks, according to an institute study.