The Pacific Northwest has begun the painstaking task of assessing damage to infrastructure and implementing repair plans after catastrophic flooding wrecked highways, rail, bridges, and flood dikes near Vancouver and elsewhere in British Columbia and Washington state, and left thousands of people displaced. Officials have now extended a province-wide state of emergency until Dec. 14.

Rob Fleming, B.C. transportation minister, said at a Nov. 26 briefing in Victoria,B.C. that crews were working “non-stop” to repair an estimated 200 highway sites in the province’s Interior and south coastal regions that were damaged or destroyed, issuing requests for proposals for engineering and construction services to rebuild two heavily damaged arteries into Vancouver—Highway 8 and Highway 1—that are part of the Trans-Canada highway system.

Prime Minister Justin Trudeau, in a Nov. 26 visit to the stricken area, said a new cabinet level committee will assist in recovery planning and national disaster response strategy related to climate change, including more resilient infrastructure "that’s going to be able to handle hundred year storms every few years, because that seems to be the pattern we’re on."

Neither Trudeau nor other officials have provided a cost estimate for the B.C. flood and recovery.

More than 8 in. of rain fell in one day on some parts of the province at the height of the deluge, at one point cutting off all highway and rail access to the city and shutting its booming port. Some highways partly reopened, but with major washouts and concerns about more damage to vulnerable infrastructure.

Four people are confirmed dead, with one unaccounted for, according to the Canadian Press.

“Our transportation infrastructure is crippled,” B.C. Public Safety Minister Mike Farnworth said, according to a Canada Press report. “Getting our roadways and railways back up and in operation is our No. 1 priority. We fully recognize how important it is to reopen road connections from the Lower Mainland to the Interior to get those supply chains moving.”

Repair crews and damage assessment teams face a tough job complicated by the Canadian winter looming, as well as the amount of transportation, energy and water infrastructure in need of triage and restoration. 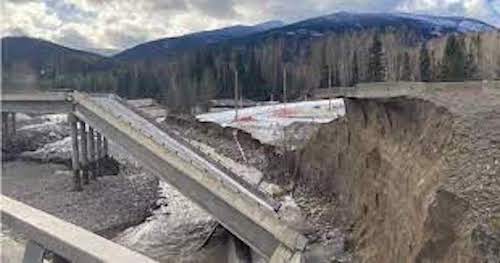 “It’s unprecedented, the size and scope and the number of sites,” Joe Wrobel, president of JPW Road and Bridge, a highway contractor based in North Okanagan, B.C., former head of the Canadian Construction Association told the Canadian Press, adding that debris removal will be the easiest task. He said he has never seen so many severely damaged roads in need of repair all at once.

Duncan Leitch, a biology professor at the University of British Columbia-Vancouver and city resident, says he was struck by the growing signs of stress as the enormity the provincial transportation destruction sinks in. The only surviving road link leads south along the coast into Washington State.

"The [highways] are completely washed out," he says. "This is years’ worth of work to do. it’s hard to know where they will start."

Replacing wrecked bridges will take the longest, with decisions to be made on whether to relocate them or use a new design,” says Brenda McCabe, professor emerita in civil and mineral engineering at the University of Toronto and president of the Canadian Society for Civil Engineering.

“As anything else in engineering, the first thing is safety,” she says, adding, “if it’s a landslide, is the ground stable?” will be among questions confronting engineers.

One key artery and the province's only four-lane link, the Coquihalla Highway, has numerous areas of heavy damage, with a Ministry of Transportation spokeswoman saying on Nov. 18 that while initial damage assessments are complete, she could not estimate when the highway would be fully restored, acknowledging that  “temporary repairs are going to take months.”

The spokeswoman said crews are preparing site plans to begin the temporary fixes, "while engineering, procurement and construction experts work to determine the best and fastest way to restore the corridor to its pre-event conditions.”

Transport Ministry chief Fleming said on Nov. 23 that engineers were being flown in to assess several of its collapsed bridges, and another significantly damaged or degraded sites. “We’ll have more to say once engineering staff look at temporary and long-term repairs,” he said in a briefing.

The atmospheric rivers that triggered the catastrophic floods wreaked damage across an area far more extensive than what an earthquake, tornado or even hurricane could have done, says McCabe.

The ferocity and sweeping extent of the storm and flooding, in turn, is likely to generate added attention to the climate change threat posed to infrastructure in Vancouver and beyond. “To cover that amount of space, the area that was impacted, it certainly got everyone’s attention on what is possible,” she says.

Dylan Clark, a senior research associate at the Canadian Institute for Climate Choices, says the massive damage caused by the flooding in B.C. is more than just the impact of climate change playing itself out.

He contends it is also results from failure of various levels of government so far to adequately prepare for the challenges ahead. Vancouver issued permits for more than $1 billion in new development from 2017 to 2021 on sites facing serious flood risks, according to a recent study by the institute.

“Infrastructure across Canada is not being built for the risks that are on the horizon when it comes to climate change,” Clark says.

The flooding also has forced shutdown since Nov. 14 of the Trans Mountain pipeline, which each day funnels 300,000 barrels of crude oil from Alberta to export terminals on the Pacific coast.

Public Safety Minister Farnsworth said Dec. 1 that the government-owned line is not set to fully operate until mid-December, with gas rationing continuing, although Trans Mountain estimates some limited service by week'e end. The shutdown to date is the longest in the line's 70-year history. A key refinery in Burnaby, B.C. als0 remains shut down.

Restoration crews were undertaking “geotechnical evaluations of slope stability and on-the-ground analysis to determine if there is work required to repair or re-establish protective cover where the pipe has been exposed due to flooding,” Trans Mountain said.

Construction crews working on the pipeline's expansion in areas of B.C. hit hard by flooding, were pitching in with road clearing and providing equipment, projects officials said in a statement.

Work has continued on the expansion project in areas not affected by flooding, Trans Mountain said.

Flooding in southern British Columbia will be Canada's largest natural catastrophic insurance disaster in 2021, predicted one insurance industry analyst, who noted that several floods in the last decade each exceeded $1 billion in claims.

"Now, after the brunt of the storm has receded, it becomes clear the flow of trade and of people between B.C. and the rest of Canada will not fully return to normal any time soon. This blow lands as global and domestic supply chains are already under immense strain thanks to the pandemic," said The Globe and Mail in a Nov. 19 editorial. "The consequences of the B.C. disaster will be felt across Canada."